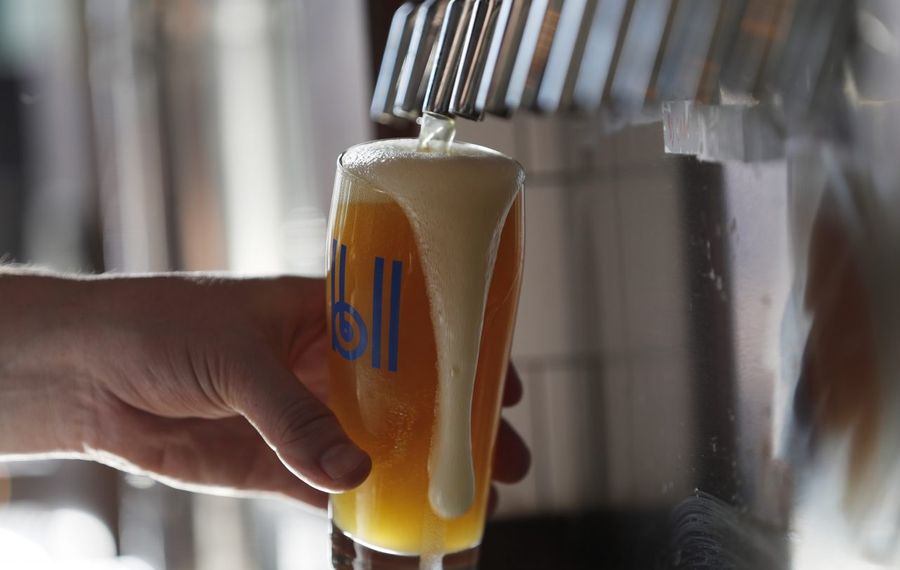 We love our beer – illustrated by the fact we turned historic grain silos into a six-pack of Labatt looming over Buffalo RiverWorks. Our passion for beer and the talent and vision of local brewers and business owners have organically created a Buffalo brewery district.

Each brewery offers distinct flavors, menus and ambiance. Many have given new life to century-old structures and all have reinvigorated their neighborhoods.

The oldest of the lot originally opened with a mix of local investors and the owners of Wynkoop Brewing Company in Denver. The Colorado owners bowed out two years later, after concluding that managing the place from a distance had become a “train wreck,” and gave Pearl Street the name of its flagship amber ale.

This restaurant sits in the basement of the historic Dun Building and offers Japanese tavern cooking with similar-fashioned beers brewed to match.

Menu favorites: Cooking styles go beyond the teriyaki, sushi and udon dishes offered elsewhere in the reason, but that’s no excuse to skip the Teriyaki Spare Ribs are sauteed with house-made teriyaki sauce. Yum.

Recommendation: Some may consider Simbo a Japanese Budweiser-style lager, but this rice-based, all-purpose beer pairs well with many of the dishes on the menu.

Labatt USA opened a brewery and taproom in its national headquarters alongside KeyBank Center to serve as its innovation brewery and brought head brewer Ryan Brady from a similar job at company owned by Genesee Brewing in Rochester to run it. Styles in the taproom run the gamut. The Pegula Sports & Entertainment-owned Draft Room is in the same historic building for those who want a larger variety of beer and something to eat.

Recommendation: American Wheat (4.6%), a flavorful, sunny and experimental option for those eager to try something different from the cherished Buffalo-headquartered Canadian brewer. 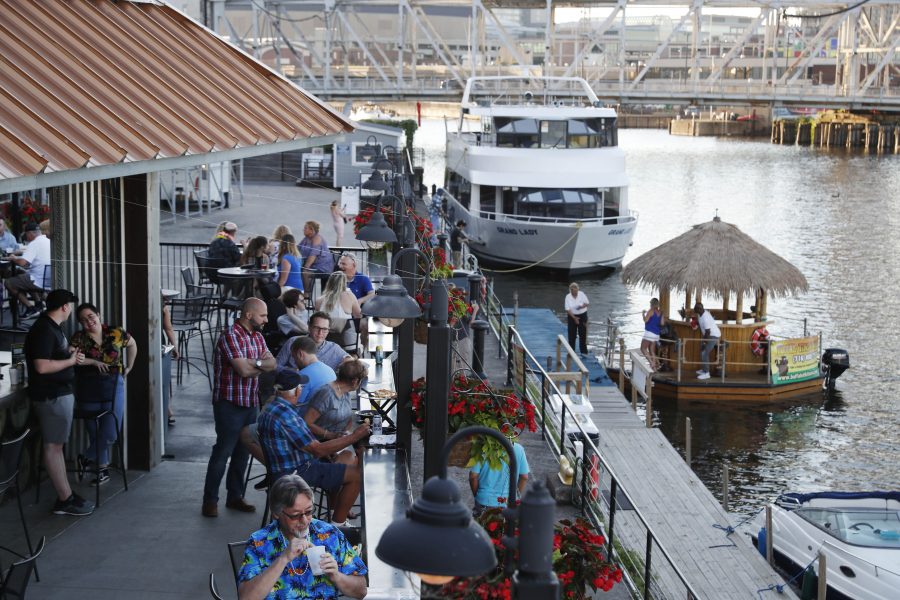 RiverWorks at 359 Ganson St. is one of 11 – and counting – new breweries in a 1.8-mile distances. (Sharon Cantillon/Buffalo News)

This brewery was carved into six abandoned grain elevators along the Buffalo River and is among a trio of craft breweries in the Pearl Street chain (the other, the Lafayette Brewing Company, is 1.4 miles north in the restored Hotel at The Lafayette). The beer and food menus in each vary. RiverWorks is a sprawling entertainment and adventure mecca with food, several full-service bars, covered ice rinks/playing arenas, zip lining and a high-ropes course, rental kayaks, dinner cruises and roller derby.

Recommendation: Wheeler Wheat (4.6%), a German-style Hefeweizen that drinks delightfully while gazing at its brewery’s neighboring Buffalo River, and named to hearken back to the industrial days of its grain elevator-hosted confines.

[Related: How RiverWorks became a player in the local concert scene]

Plans for a local franchise of this international chain have been in the works for five years but the need to choose this alternate location – a former Bison Chip Dip plant – and construction snags have caused delays, said Kevin Townsell, former owner of Shannon Pub in Amherst. Townsell has enlisted 50 investors on the $5 million project, which will serve German food and brew Bavarian beers under the strict German Purity Law of 1516. 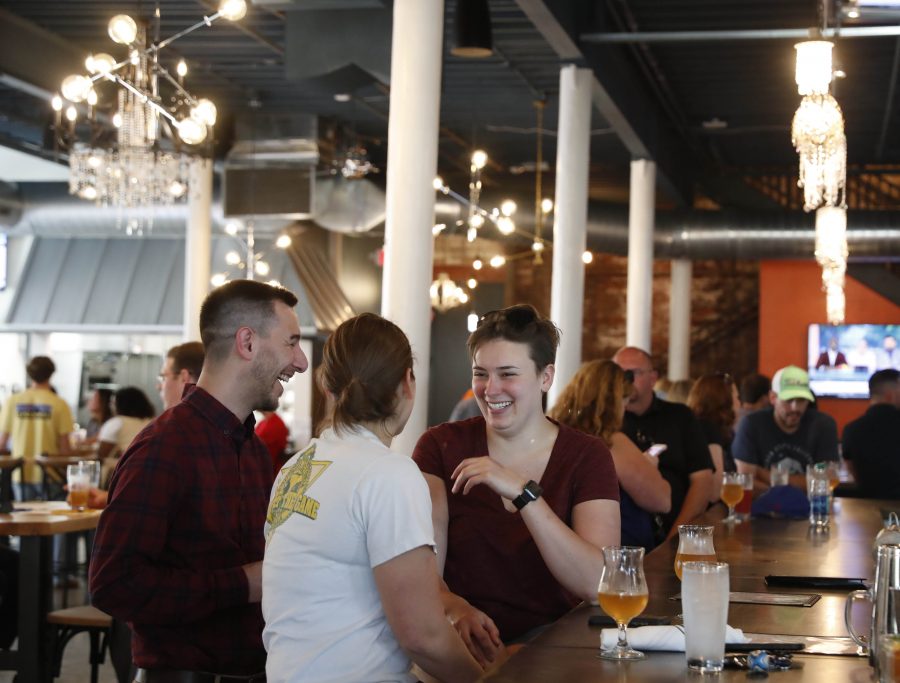 The new brewery is four times the size of the first beer-making site the company opened in 2014 on Niagara Street, which will continue to operate as a beer hall and innovation craft beer maker. It combines a historic manufacturing building that holds a taproom and banquet hall with a new addition that shelters a brewhouse and beer hall. It is designed to boost production of the company’s most popular beers, including Resurgence IPA, Citmo and the Surge, and host weddings and events.

Recommendation: The Surge (6.5%), an updated take on the brewery’s popular Citra 2.0 New England IPA, and now available as a Ballpark Brewers Series can at Sahlen Field during Bisons action.

Head brewer Karl Kolbe cut his teeth homebrewing, then worked in craft breweries on the West Coast, before returning to open his own brewery in the Barrel Factory, a reclaimed two-story former manufacturing building that also includes a distillery (one of three within the district), a kombucha bar, kayak outfitter and banquet hall.

Recommendation: Strummer (6%), an easy-drinking Belgian blonde ale from the Barrel House locals, but regrettably the only Buffalo-area beer sharing its name with a member of The Clash. (Simonon Saison, anyone?)

Matthew Conron and Bill Metzger bought this iconic Irish pub in 2012 and started brewing their own beers two years later. The place maintains its historic charm, with brewer Bryan Kirchmyer concocting a rotating mix of styles that include lagers, ambers, porters and IPAs including a Smashtag series that has impressed customers and fellow brewers.

Favorites: This is Not a Pale Ale (Pale Ale), OFW-Against the Grain (Hefeweizen)

Recommendation: OFW Oatmeal Stout (6%), a sweeter take on its traditionally Irish neighborhood’s favored Guinness, but with a more potent ABV pop — for those into this sort of thing. 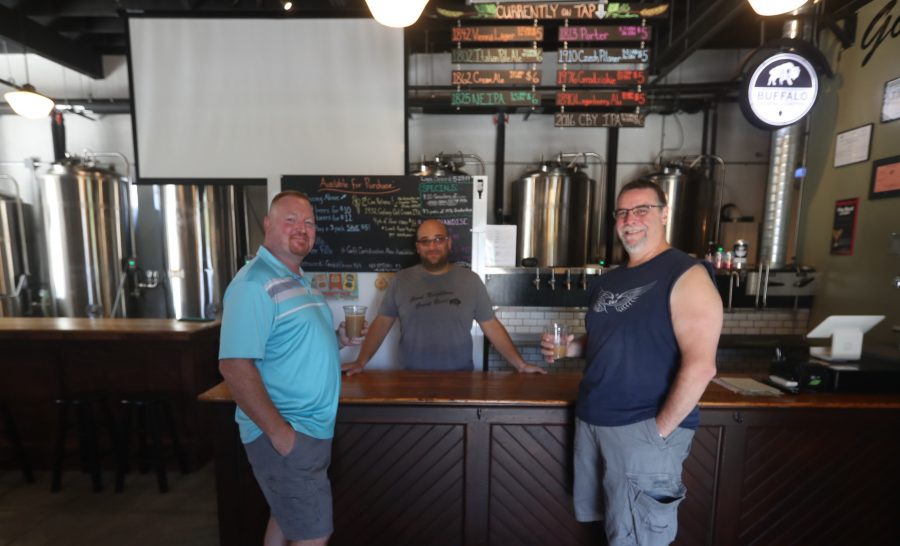 John Domres Jr. built the brewery to satisfy his homebrewing fix. His beers – and their names – pay homage to the pre-Prohibition days, including 1813 Porter, 1842 Vienna Lager and 1804 NYS Pale Ale. Each beer signifies a historic year in Buffalo history: 1976 Grodziskie bows to Karl Wojtyla, the Polish cardinal who visited Buffalo that year, two years before he became John Paul II.

Recommendation: 1841 (6%), an Irish red ale named for the year Buffalo elected its first Irish mayor, Isaac “Cuff” Harrington, and a smooth selection to drink all year—to commemorate the brief time Harrington served as mayor (one year). 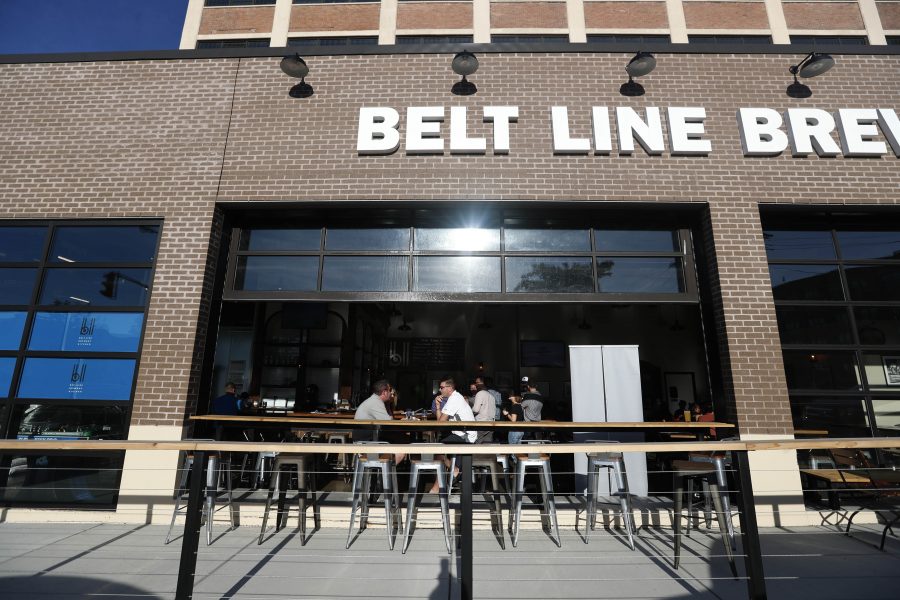 The new Belt Line Brewery at 545 Swan St. has a patio to take advantage of the warmer weather. (Sharon Cantillon/Buffalo News)

Named for a rail line built in the late 19th century, with 19 stops around the city. Head brewer Erik Greiner has a penchant for brewing lagers and hefeweizens but the biggest hit so far has been the lightest of the bunch, Honey Kolsch, a nice bridge for those looking to dabble with local craft beer.

Recommendation: This Is (5.9% ABV), the off-Larkin brewer’s crisp take on a farmhouse ale, also features the odd flavor bedfellows of tangerine and bubblegum. (Just taste it. You’ll like it.) 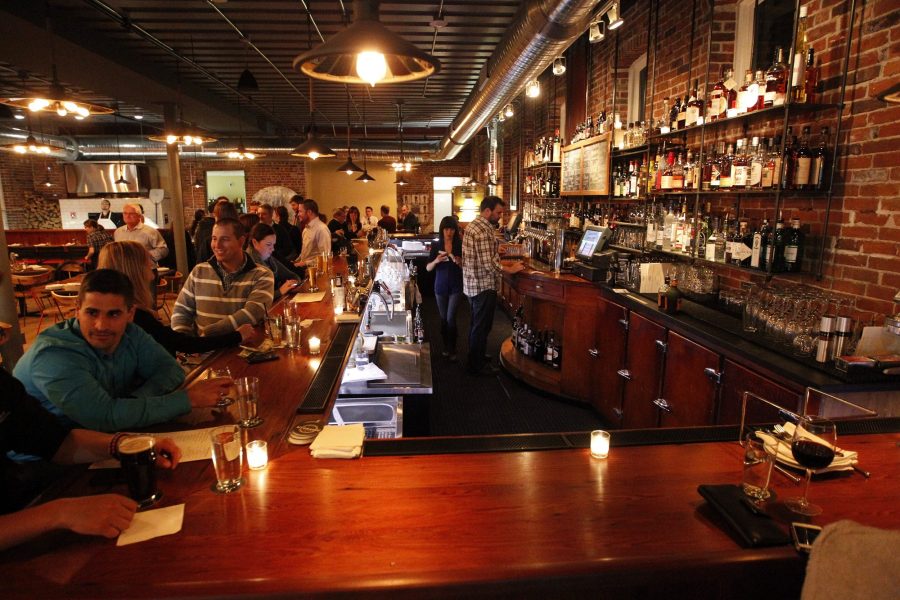 Community Beer Works, which operates on the West Side, was the first craft brewer to see the prospects in Larkinville when it opened a small brewery five years ago in this restaurant known for its wood-fired pizza, craft cocktails, beer and beer garden.

Menu favorites: Dreizhen (4.9%), a light, crisp German pilsner and Ein Bier Bitte (4.5%) a Hefeweizen with a banana profile and hint of clove.

Recommendation: Pareidolia, a 5% summer seasonal sour with the look and taste of raspberry and blackberry.

Manager Tim Herzog is considered the godfather of local craft beer. He opened Flying Bison in Black Rock in 2000 and sold it to FX Matt Brewing of Utica a decade later, before the Buffalo boom took hold. Herzog still runs the place. His son, Colin, is the head brewer, and Flying Bison continues to lead in brew offerings and special events. It also boasts the top-selling regional craft beer: Rusty Chain, a Vienna-style amber.

Recommendation: Juice Caboose (7.5%), a hoppy option for IPA enthusiasts, but with a mild bitterness and replicated citrus notes for those often reticent to enjoy similar brewing selections.