When Joseph Barone's first movie “The Hired Hitman” premieres Aug. 25 in the Aurora Theatre it will mark the culmination of his longtime passion for mobster films.

“I’ve really always loved mobster films such as ‘Scarface’ and ‘Goodfellas’ and I’ve always wanted to do a project like that, so that’s where my inspiration came from,” said Barone, 23, a graduate of West Seneca East High School.

He describes his film as the story of "a hit man who is hired by a ruthless mob boss that finds out someone in his organization is stealing from him.” Barone wrote the screenplay in March and filmed from April to June in locations including Ilio DiPaolo’s and Club Marcella where he is the official photographer. The dedicated filmmaker used $1,200 of his own money to complete filming.

His friends were an integral part in the movie getting made in multiple ways. Barone had some personal difficulties during filming and friends convinced him to keep going. That stays in line with Barone's inspirational motto he culled from the "Rocky" films, also favorites. "I’ve seen each movie at least 175 times, and like the character of Rocky, no matter how many times he gets knocked down, he gets right back up, and keeps punchin', " Barone said. 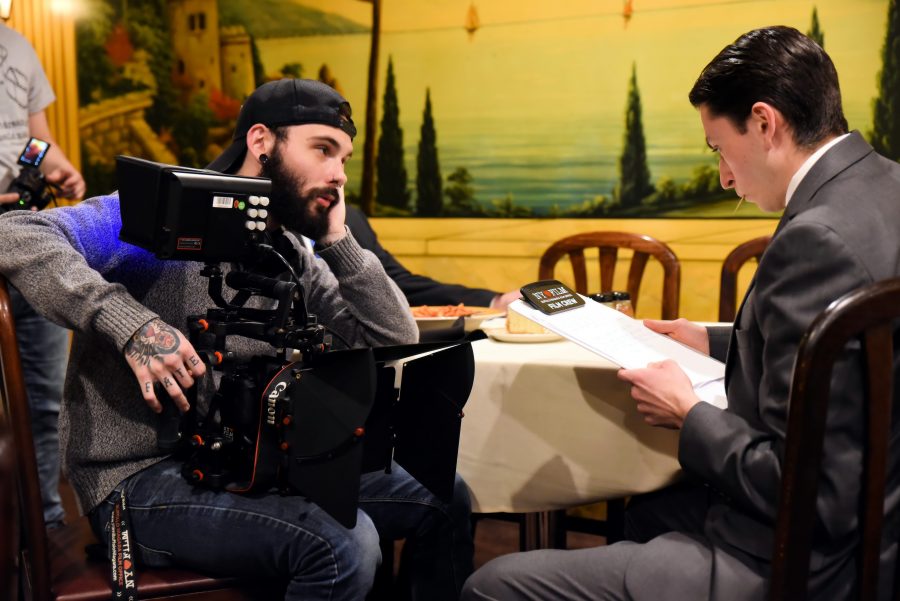 Director Joseph Barone goes over a scene with actor Matthew Amoia on the set of "The Hired Hitman."

His friends also helped by starring in "The Hired Hitman.”

“None of these people in my film are actors, they are really close friends,” Barone said. “I feel as if I really got them out of their comfort zone. I was lucky with who I picked. They all did superb.”

After this, Barone plans to work toward an ultimate goal of winning an Oscar. "I think that’s everyone’s goal as a filmmaker," Barone said, adding he understands how difficult the industry can be. "But even if the road ahead is challenging, that’s OK. Stop over and ask for directions. People can help."