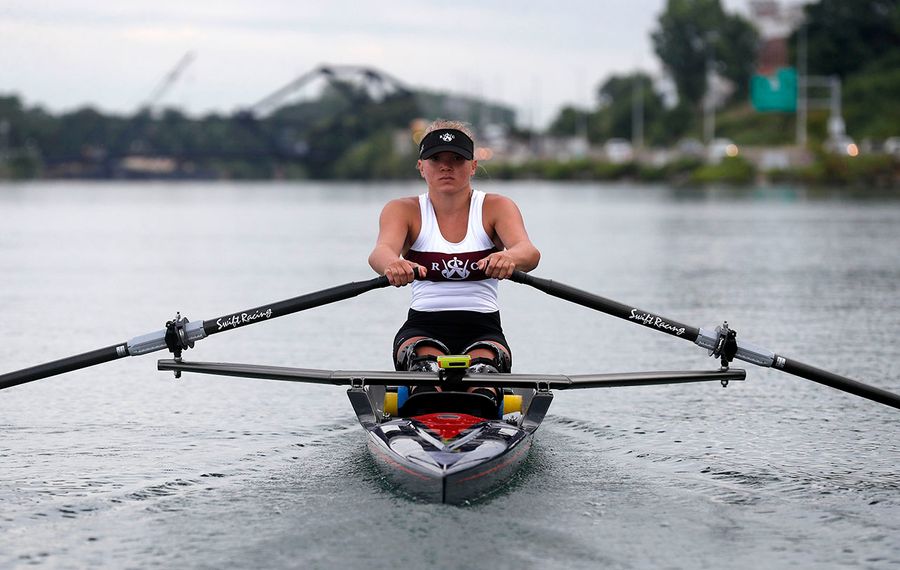 Adaptive sports have opened avenues for Maddy Eberhard to apply her abilities across the globe.

Eberhard discovered sled hockey at age 9. Four years later, she became one of the youngest players ever to make the U.S. women’s national team. In her fourth year in the program, Eberhard won gold with Team USA in May at the International Women’s Para Ice Hockey World Cup in the Czech Republic.

Now 17, Eberhard is entering international waters in another sport, competing for the U.S. para-rowing national team at the World Rowing Championships next week in Austria.

“Adaptive sports have increased my quality of life so much,” Eberhard said following a recent morning workout at West Side Rowing Club. “Through the overall fitness, the experiences, the travel and the people I’ve met.

“Sports have really helped my confidence over the years,” the Sacred Heart senior elaborated. “Knowing that I can be as competitive, or even more so, than my peers who don’t have a disability. Even when I was younger, I was never really stopped by my disability. I’ve just learned to live with it. I like showing that a disability is not going to stop me from competing in a sport I love.”

Maddy has limited mobility and function in both legs from the genetic disorder Larsen syndrome. She was born with dislocations at every joint below the waist, her feet and kneecaps faced backwards.

For the first year of her life, Mike and Julie Eberhard made twice weekly trips to Children’s Hospital with Maddy so doctors could incrementally realign her infant bones, setting a new cast each visit. Maddy underwent hip surgery at age 1 that required her to wear a cast from the neck down for three months.

When she turned 6, Maddy had a bilateral hip reduction that bound her to a wheelchair for several months, but it made Maddy ambulatory in the long run. With stabilizing knee braces, her day-to-day activity is mostly unencumbered. 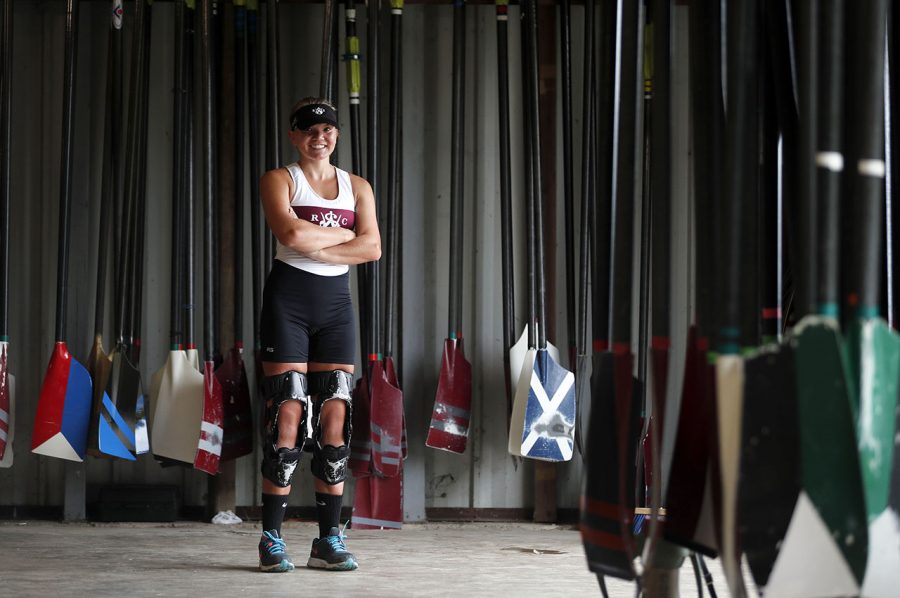 Maddy Eberhard at the West Side Rowing Club in Buffalo. (Mark Mulville/Buffalo News)

Slowed but not deterred from trying soccer and T-ball, Maddy eventually found her athletic pursuit from an encounter during a 24-hour charity game her father participated in at Hockey Outlet.

“Until she discovered sled hockey, we hadn’t heard of adaptive sports,” said Mike Eberhard, who played hockey for St. Joe’s and SUNY Fredonia State. “We didn’t realize how serious and competitive it could be.”

Maddy developed rapidly in the sled hockey program sponsored by the Buffalo Sabres and, later, the U.S. national team.

Starting at West Side Rowing Club in 2017, Maddy’s initial intent was to get stronger for sled hockey. She rowed in a novice eight boat with crew mates from Sacred Heart and other local high schools.

“The great thing about rowing out of West Side is she’s with her classmates,” Mike Eberhard said. “She might not be in the same boat, but she’s down there every day training together with this whole new group of friends she’s made, not only at Sacred Heart but from other high schools. It’s been really fun to watch her do that. I don’t know if she would be able to do that in any other sport.”

Mustering as much leg drive as she could in her strokes, Eberhard’s rowing power was limited by her knees, which can’t bend beyond 90 degrees.

Mike Cute, head coach and director of rowing for West Side, encouraged Eberhard to try para-rowing, which would allow her to race in a boat with a fixed seat propelled solely by upper-body movement.

Eberhard was classified as a PR2 (trunk and arms) competitor at a January clinic in Philadelphia and was invited to a U.S. national team ID camp.

Ellen Minzner, a world champion rower and U.S. para-rowing coach, told row2k.com that Eberhard had the potential to be a future Paralympian.

“She’s a strong kid. She comes from a strong sport background, from a different para sport, and just to have somebody who is so early in her career be able to hold her own among some of the veterans here at development camp is just super exciting,” Minzner added. “Maddy is the kind of young athlete we want in the system because it’s not just 2020 [in Tokyo], it’s L.A. [in] 2028 on our home soil.”

Cute arranged for Eberhard to get individual coaching this summer from Sasha Bailey, an assistant rowing coaching at Canisius College and former West Sider who became a conference champion for the University at Buffalo.

“As a coach, I’m learning a lot from her through this process,” Bailey said. “She has great competitive experience from sled hockey. As we continue to learn about para-rowing and how it’s evolving in our country, I think Maddy, as young as she is, can help shape the future for U.S. para-rowing and show other athletes that this is something that is possible for them.”

Leading Eberhard though two-hour workouts six mornings per week at West Side, Bailey said: “We’re focusing on the nitty, gritty blade work, things that would be specific to rowing arms and body only. Trying to get the most boat speed that we can with her not having use of a sliding seat. And making sure the boat is the right fit and moving well for her.”

“Maddy wouldn’t be in this position without Mike and Sasha and the team at West Side,” Mike Eberhard said. “I have watched a level of dedication from a coach to an athlete that is second to none from the minute Maddy started training with Sasha.”

While traveling to train for the PR2 mixed double race with partner Isaac French of the Saratoga Rowing Association, Eberhard continued develop her sculling skill under Bailey’s direction.

At last month’s USRowing trials in Mercer, N.J., Eberhard won the PR2 single in her first para-rowing race to qualify for the world championships.

“Being that it was my first race, I was super nervous going into it,” Eberhard said. “I never would’ve imagined going into the season that this is where I’d be. I’m pretty excited.”

“It’s all moved really fast,” Mike Eberhard said. “And it’s been a little overwhelming. The training for rowing is really intense. But seeing the success she’s had is incredible.”

On a GoFundMe page set up to help pay for Eberhard and Bailey’s travel, lodging, equipment rentals and fees while in Austria, Maddy wrote, “I believe this is only the beginning of an amazing career, and a way for me to inspire other young para-athletes to chase their dreams.”

As many of you may know, this July I qualified for the World Rowing Championships in Austria this August to represent Team USA! Please consider taking some time to read about me and my journey. Any donation to help with the cost is greatly appreciated! 🇺🇸 https://t.co/RgSiVZvxMR

Para-rowing offers opportunities for Eberhard that sled hockey could not. While she is still on the U.S. women’s sled hockey development roster, the sport is not yet part of the Paralympics.

Eberhard hopes to qualify in para-rowing for the 2020 games in Tokyo. Her new sport also presents more college choices.

Bailey noted how adaptive athletes could be integrated into existing rowing teams and predicted that, “within the next five years, I wouldn’t be surprised if we see more colleges grow para-rowing programs.”

“Adaptive sports aren’t big in colleges yet, but they are definitely becoming bigger,” Eberhard said. “A lot of colleges are taking adaptive athletes into their programs to help grow the sport. I’ve talked to some coaches about potentially rowing with their teams.”

“Being that this is my first year getting into para-rowing,” Eberhard concluded, “I think there is a lot more for me in the future.”