On July 12, the New York Times published an article called "Move Over, Therapy Dogs. Hello, Therapy Cows." in which the writer visited Mountain Horse Farm in the Finger Lakes region. It's a bed and breakfast recently making the media circuit for its unusual (and adorable) therapy practice involving cuddling with massive, soft, fluffy cows.

When The News reached out to owners Suzanne and Rudi Vullers, Suzanne said they have been "overwhelmed" with media requests since the Times story published.

It's a little reminiscent of when goat yoga blew up in 2016 after an Oregon farm owner started to combine yoga and goats to help her get through her divorce, according to CNBC. Goat yoga then came to Canalside and nearby farms the following year. Love in Motion Yoga still holds classes at Alpine Made Farm in South Wales. (The last of the season was Aug. 18.)

But back to the cows, CNN wrote that cow cuddling "may be exactly what we all need in life."

At Mountain Horse Farm, the "horse and cow experience" is one of consent, friendship and respect.

"When you spend time with them, you enter their space, and connecting with them is as much their choice as it is yours," reads the website description. "Knowing that they can say yes or no, makes our horses & cows love their interactions with humans."

They make it clear that this is not a petting zoo.

In the Times article, Elisa Mala writes that cow cuddling is similar to equine therapy, also offered at Mountain Horse Farm, but has "one game-changing difference," which is that cows like to lie down in the grass, allowing cuddlers to lie right down with them. 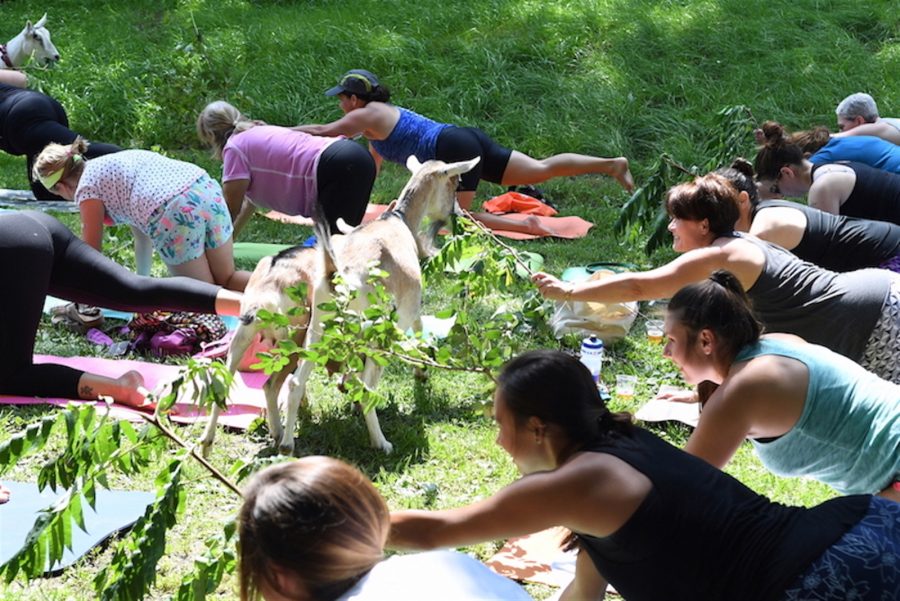 The Vullers chose cows Bonnie and Bella (whose greatest joy in life, according to the website, is eating) for their temperament and lack of horns, Mala writes.

Apparently, the practice is popular in the Netherlands, where the Vullers are from, as a way to bridge urban dwellers with rural life, Mala writes.