Nearly 50 people turned out for a rally Sunday in Niagara Square to draw attention to the dangers of gun violence, as three organizations and a young local activist sought this weekend to raise awareness and pressure lawmakers to tighten rules intended to prevent the proliferation of weapons on the streets.

Clad in red shirts, the local chapter of Moms Demand Action for Gun Sense in America gathered in front of the McKinley Monument Sunday afternoon for a "Recess Rally," to urge federal lawmakers on summer break to "do your job" and pass three bills that are languishing in the U.S. Senate.

"We want to let them know that while they may be taking a break this summer, gun violence does not," said Meghan Connors, founder and leader of the local group, which partnered with the WNY Peace Center and the Stop the Violence Coalition for the event. "We want to let our federal lawmakers know that when they return to session in D.C. this fall, we will have them on notice. We are watching their actions or lack thereof, and we are expecting them to put gun legislation as a top priority for a vote."

Two of the proposed pieces of legislation would strengthen background checks, while the third would create a federal "red flag" protection order similar to one in New York State that would prevent individuals from obtaining guns if they are seen as threats.

"These three bills could have an immediate impact on gun violence in this country," Connors said. "We’re watching them and we’re demanding that they do something. There has just been too much violence with the recent mass shootings and the daily violence."

Besides the three organizations, speakers at the event also included Courtney P. Ball, a staff assistant to Sen. Charles E. Schumer, D-NY and minority leader, as well as Kelsey Dux, a 19-year-old student at SUNY Geneseo, who grew up in Buffalo. “The senator believes that thoughts and prayers don’t cut it, and we must address the threat gun violence poses to our community,” Ball said.

The mothers group was started in 2013 by a stay-at-home mother in Indiana after the Sandy Hook Elementary School shooting in Connecticut, and has since organized 5 million volunteers nationwide, with chapters around the country, including in New York. The national organization organized 120 anti-violence rallies in the last two weeks, with more than 10,000 people in attendance. 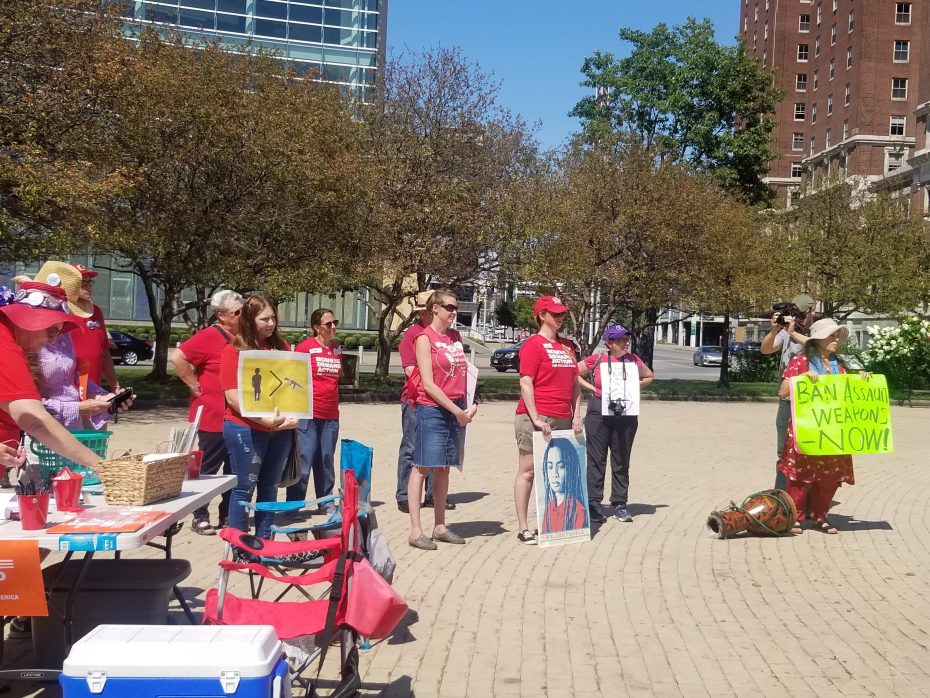 Connors, herself a stay-at-home mother of a young child, started the Buffalo group in January 2018, right before the shooting at Marjory Stoneman Douglas High School in Parkland, Fla., and she now has 200 members in the local group. She noted that 96 people are killed every day in America in gun incidents, which includes not only mass shootings but also murders, suicide and domestic violence.

However, Connors noted that Moms Demand Action is not a gun-control group. "We do support gun owners," she said. "We support the Second Amendment, but we think there are responsibilities that come along with it."

About a half-dozen counter-demonstrators gathered across the streets in front of City Hall, staying silent but waving two giant American flags and one blue flag denouncing tyranny. "It's evil that does it. It's not law-abiding citizens that do it," said Rick Abbott, one of the protesters, saying that weapons are not the problem. "Everybody should have the right to keep and bear arms, and everybody has the right to protect themselves."

Sunday's event was the second such rally this weekend, sparked by growing alarm over mass shootings, murders and even suicides. The Peace Center – in partnership with Ruweyda Ahmed Salim, a 24-year-old West Side resident who organized the event – also sponsored a gun control demonstration on Friday afternoon in front of City Hall, calling for legislative action to halt the spread of guns.

The Peace Center focused on its desire to ban assault weapons, while Salim warned of efforts to weaken state laws and voiced concern about gun trafficking across state lines. At least 20 people attended the event.

"Assault weapons do not belong in this country or almost anywhere that is not a war zone, and even in a war zone," said Victoria Ross, executive director of the Peace Center. "We want our legislators to reduce the number of firearms around, and that includes state-owned weapons as well as privately owned weapons. There’s too much gun violence all around. More guns do not make us more safe."

Salim also warned of the ease with which guns can enter New York from Ohio or other states with more lax laws. "There's a lot of gun violence in Buffalo," said the native of Somalia, who grew up in Buffalo and went to McKinley High School, where she knew classmates who had been shot. "People are not aware of that, and it doesn't get a lot of coverage."

In particular, Salim noted that Rep. Chris Collins, R-Clarence, is seeking to pass his Second Amendment Guarantee Act that would overturn New York's SAFE Act and any similar legislation in other states.

"I don't think a lot of people are aware of that," said Salim, who noted that Collins – as well as Reps. Brian Higgins and Tom Reed, also both from Western New York – has accepted donations from the National Rifle Association. "We have our congressmen that have accepted donations from the NRA, and what’s happening in the other states with these gun laws could easily happen in New York State if we don’t hold our elected officials accountable."