Nancy Miosi took a good look at the top. She was about to climb onto a midway ride known as the Sky Wheel or more generally as the double Ferris wheel, and Miosi realized she had forgotten one thing since she rode it as a teenager in the 1960s at the Erie County Fair.

At almost 80 feet at its peak, this was one tall ride.

Still, Miosi had promised to join her 9-year-old granddaughter Eva on the Sky Wheel. They settled in for that great, communal up-we-go ritual of grown-up and child shoulder-to-shoulder in a slowly rising seat as gears, pulleys and cables hummed and creaked around them, all of it building into that moment when the entire throwback apparatus starts to twirl.

Miosi, raised on Buffalo's West Side, remembers sharing the same experience with her own dad, and she was not one to break her word to her granddaughter.

She made no promise, however, about keeping her eyes open.

“Closed the whole time!” a jubilant Eva said after a ride the child described as “amazing.” 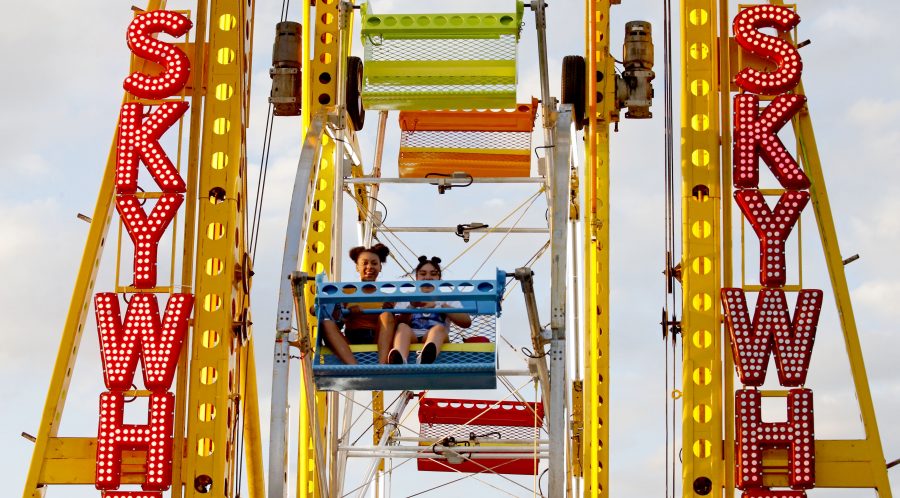 She has a soft spot for the Sky Wheel, back at the fair after an absence of more than 20 years. Thousands of people have already given it a shot, lines often stretching beyond the nearby "Amish donut" stand.

The ride intertwines elements of novelty and local heritage. While the double Ferris wheel has its roots with the old Allan Herschell Amusement Co. of North Tonawanda, it has not been seen on the Hamburg midway since the operators of the James E. Strates Shows brought it out of retirement briefly in the 1990s.

“Listen,” said this era's James E. Strates, grandson and namesake of the founder, “these rides are few and far between.”

The Sky Wheel returned after Strates and his family listened to impassioned pleas from Marty Biniasz, marketing manager for the Erie County Agricultural Society, and such true believers as Adam Kowalik, 31, an everyday fair lover who found time during a visit to Florida to stop by the Strates main office, asking for the ride's return.

At Strates, administrators began to look around. They discovered a North Carolina business that had restored a Sky Wheel, which is now a central part of this year's midway as the fair moves through its climactic weekend.

Biniasz, at 47, is just old enough to remember the heyday of the double Ferris wheel. He made sure an exhibit dedicated to the ride has a place of honor in the fair museum, and he produces old newspaper clippings that recall how the Sky Wheel arrived with great fanfare in 1963, described by one reporter as "the most dazzling ride" in the history of the Allan Herschell Co.

If you are a graying baby boomer, you recall how big a deal it was. A traditional Ferris wheel abruptly seemed tame in comparison. "It's a unique ride, and it used to be the biggest on the midway," said Bill Pfeifer, 69, an Eastman Kodak retiree who was raised nearby and serves as a carnival historian. 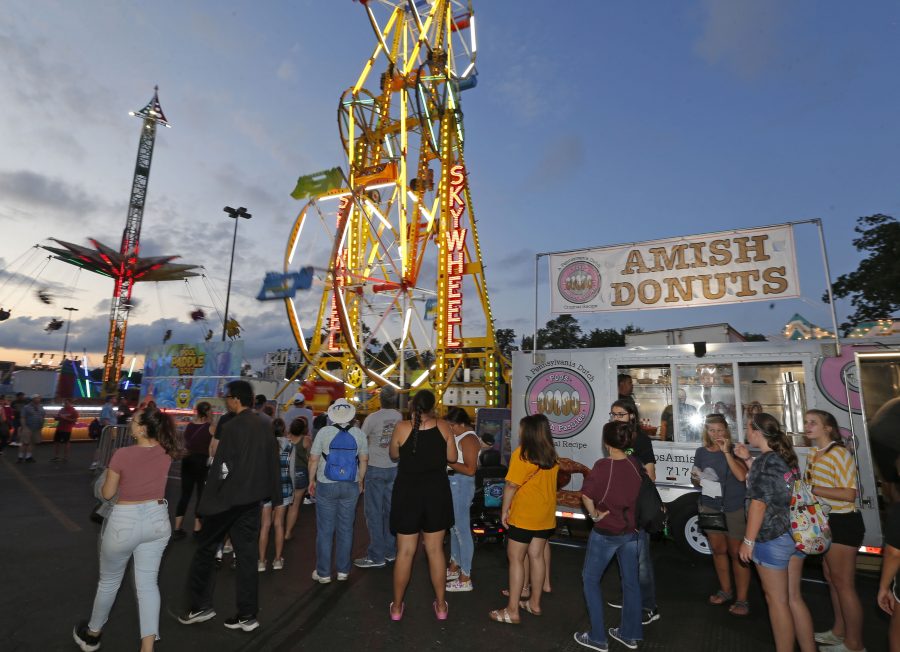 Long lines give evidence to the popularity of the Sky Wheel. (Robert Kirkham/Buffalo News)

For years, Pfeifer said, the upper wheel of the ride – a fluorescent star burning in the middle – would stay illuminated throughout the night, a fair landmark visible from far away.

"Just fantastic," he said of the ride's return. "It's been a long time."

One thing absolutely stays the same: The thrill of it is in the way it remains vaguely disorienting until you get used to the thing.

“There’s a moment there where you feel a little like you’re free-falling,” said the loquacious Strates, speaking of the instant when the second wheel comes over the top, then swings forward in a great descending loop.

Over the years, bit by bit, things changed on the midway. Strates said the introduction of the "big wheel," a 125-foot-tall Ferris wheel with cars that essentially serve as gentle sightseeing platforms, provided an even better midway view. The Sky Wheel, more of an acquired taste, often suffered in comparison, until the work involved with assembling it no longer seemed worth it for the crews. 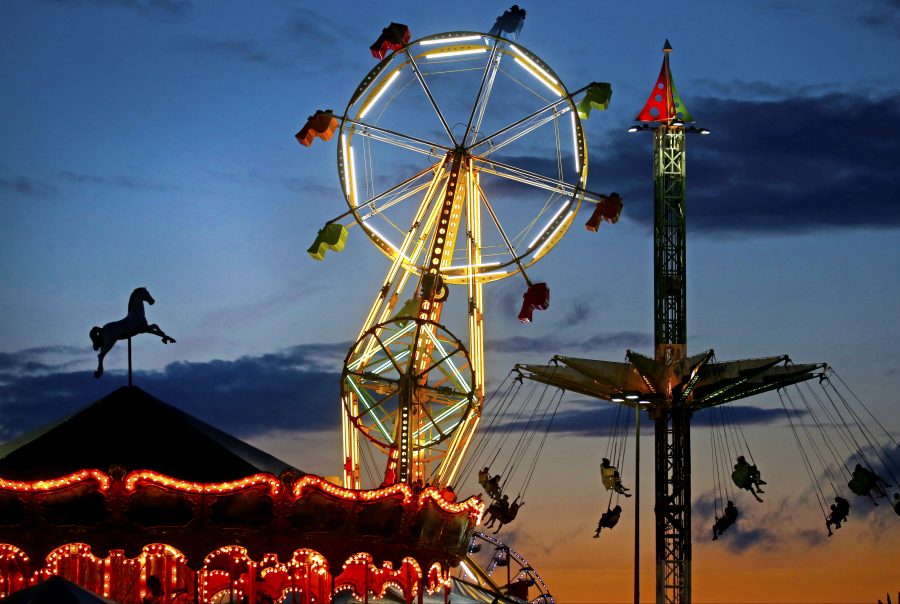 The Sky Wheel towers above the midway. (Robert Kirkham/Buffalo News)

As for the Allan Herschell Co., it was sold in 1970 to Chance Rides Manufacturing of Kansas. By 1979, the company had stopped producing double Ferris wheels, according to Duane Wiechman, a longtime sales and marketing expert who started with Chance more than 50 years ago.

In Hamburg, many Western New Yorkers remained wistful about the Sky Wheel's once-dominant place on the midway. Biniasz kept asking the Strates operation to bring it back, suggesting this summer’s 95th anniversary of the family's ties to the county fair provided a perfect opportunity.

In the end, James E. Strates and his colleagues said OK. “It is kind of legendary," Strates said of the ride. Still, he said it is too early to make any promises about whether the Sky Wheel returns next year, an answer that may be determined by just how well it does.

The general reaction thus far often involves familiar affection. The ride was a childhood favorite for Brendan MacKinnon of Lake View, who on Thursday took his own kids on the Sky Wheel while their mother, Jodi, watched. The children – 8-year-old Eliza and 6-year-old Bennett – enjoyed a chance moment that might stay with them forever. 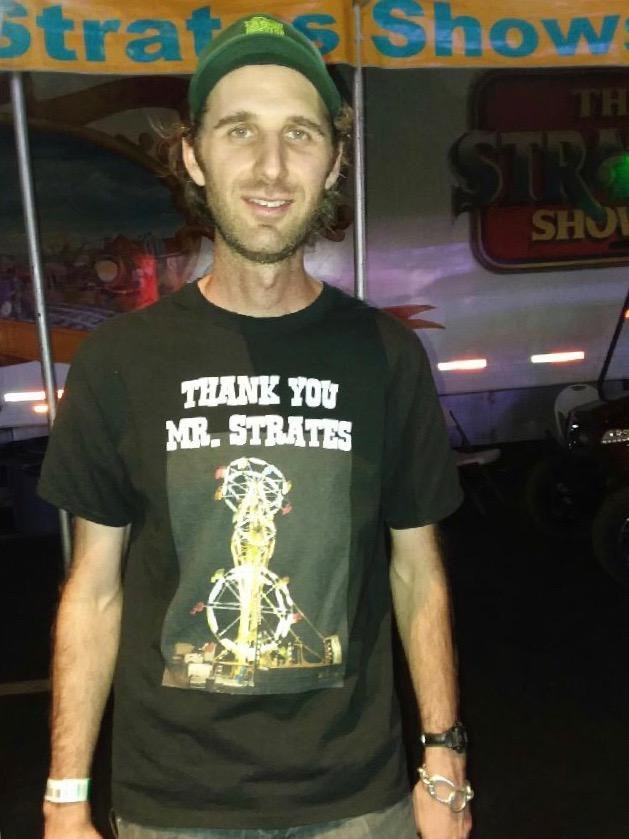 Adam Kowalik was so grateful for the return of the Sky Wheel that he had a T-shirt made. (Photo courtesy of the Erie County Fair)

Just as they reached the peak, the evening fireworks went off.

The Sky Wheel was also a familiar mainstay for Mike and Arlene Biehler, a Hamburg couple married 29 years. They grew up going to the fair, and they live close enough that they can still walk to the gate. Arlene Biehler, a schoolteacher, does a Facebook quiz each day to ask her friends to identify the fairgrounds spot she just visited, and she is so passionate that she routinely gives out fair passes as Christmas stocking stuffers.

Mike Biehler remembers how he and his childhood buddies were frequent riders on the double Ferris wheel. Then and now, he said, the best part is the squeak of rubber wheels at the midpoint of the ride, just before your seat gives a little jerk, you are lifted toward the top – and you go over.

“It feels like you’re falling out of the sky,” Arlene Biehler said.

All of this was new to Ian LaLonde, 24, who joined his mother, Gabrielle, at Thursday's Diamond Rio concert, then walked around the midway. Like Zack Rydzynski, a 28-year-old who spoke of how "the Sky Wheel kind of missed our generation," Ian LaLonde had never set foot on the ride, and he said all the creaking, whirring and twirling led him to embrace a simple philosophy.

“I decided I should only look forward,” he said, “and avoid looking down.”

Kowalik, who loves the ride as much as anyone, was so grateful about seeing the double Ferris wheel that he wore a T-shirt at the fairgrounds thanking Strates for the decision. On Thursday night, he went on it nine times before he stopped to observe many others in the line, their expressions capturing what Kowalik felt.