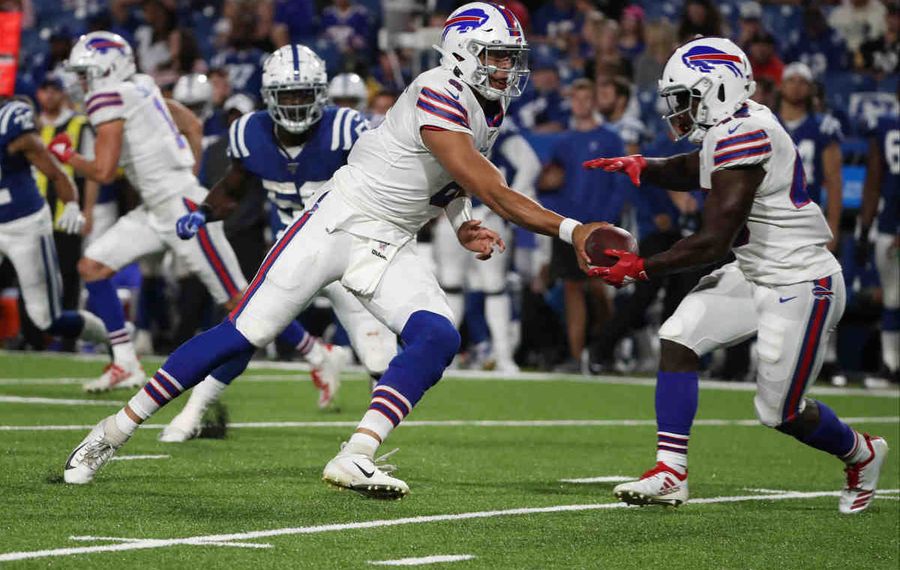 This week’s Bills Mailbag leads with the phenomenon that Christian Wade is becoming. It also hits on the crowded competition at wide receiver, Tyree Jackson’s chances of making the practice squad, whether it's time to start worrying about Stephen Hauschka and plenty more. Let’s get right to it …

@BigD50786709 asks: Why does everyone say Christian Wade can’t make the team? He sizzles! You can’t teach what he has, and it would be a waste to put him on the practice squad for a year, even with the exemption. If they do that, he can’t play this year at all. He’s a game-changer.

Jake Schv asks: What would need to happen for Wade to make the final cut? Has he done any kick returns?

Jay: I get the excitement and will admit to being blown away by Wade’s speed in the open field. He’s a ton of fun to watch, and I can’t remember a better preseason story. Still, it’s worth remembering he’s lining up against guys who will likely be out of the NFL. That’s not to take away anything from Wade, but a little perspective is a good thing in this case. Given the Bills’ depth at the position, along with the heightened expectations around the team for the 2019 season, I can’t see them giving a spot on the 53-man roster to a player who is so new to football. If Wade does get put on the practice squad, it’s a major success. Give him a year to learn more about the game, and then we’ll see if he can contribute in 2020. Keep in mind that LeSean McCoy, Frank Gore and Senorise Perry are all in the final year of their contracts. There could be a spot for Wade down the road.

As for Jake’s question about what would need to happen, it would take a catastrophic run of injuries to players ahead of him. I have not seen him return kicks in practice. It would be intriguing to see what he could do in that role.

Murph asks: Do you think Darryl Johnson has shown enough to make the 53-man roster?

Jay: He’s getting close. Being able to rush the passer gets you paid in the NFL. Johnson has flashed some intriguing potential in the first two preseason games – so much so that he might be playing his way onto the active roster, if only because the Bills are afraid they won’t be able to get him through waivers and onto the practice squad. “I just kept working. I thought it would come earlier … but it’s the National Football League. It’s not going to come easy. It was a big play,” Johnson said Friday night of his sack and forced fumble, which came with just more than three minutes left to play.

The big question is how many players will the Bills keep at defensive end? Jerry Hughes, Trent Murphy and Shaq Lawson seem entrenched as the top three, leaving Mike Love, Eddie Yarbrough, recently signed Sam Acho and Johnson competing for one or two spots. If the Bills keep five at the position, I say Johnson makes it. If it’s only four, he might not be there yet.

Sam Ruggiero asks: I know Josh Allen is our starting quarterback, but you have to admit Matt Barkley is putting up some impressive numbers and making it look easy. Is it possible in your opinion that Barkley can play a preseason game with the ‘ones?’

Jay: No, it’s not possible. Allen’s spot on the depth chart as the starting quarterback can be chiseled into concrete. Make no mistake, Barkley has been impressive – cheap plug: Check out my story on him elsewhere in this section – but that won’t be enough to earn him starting reps in the preseason. Allen and the starters will probably play at least the first half Friday in Detroit. Then in the final preseason game, Barkley might start, but it will be with the rest of the second-team offense, since the Bills will be expected to sit their starters. Nevertheless, it’s been a solid preseason for Barkley.

Rob G. asks: Do you think the Bills will carry the higher passing play count they’ve shown with starters in the preseason to the regular season, or is it all smoke and they will regress back to being more focused around the run like in previous years?

Jay: I think the Bills do want the foundation of their offense to be a strong running game. We can roll our eyes all we want about “building a team to play in Buffalo,” but I truly believe this front office and coaching staff finds value in that. Keeping McCoy around when he has a salary cap hit of more than $9 million is an indication they expect him to play a big part in the offense. Signing Gore and drafting Devin Singletary in the third round only heightens my belief that the running game remains a top priority. That’s not to say things can’t change once the regular season arrives.

We still don’t know what the starting offensive line will look like together, and what its strength will be. If spreading the field with four wide receivers proves to be the team’s best personnel package, I’m confident offensive coordinator Brian Daboll won’t try to jam a square peg into a round hole by running the ball. By using the word regress, I’m guessing Rob would like to see a more passing-oriented attack. Given that the Bills traded up to the seventh overall draft pick to draft Allen in 2018, that’s a reasonable stance. The good news is, even though it’s only preseason, Allen has shown flashes this summer he’s up for that.

Pat asks: Is Tyree Jackson even worthy of a spot on the practice squad? He may be worse than Nathan Peterman.

Jim Campbell asks: Has Jackson done enough to earn a spot on the practice squad if they go with two quarterbacks?

Jay: There’s no way to sugarcoat it: Jackson looked awful against the Panthers on Friday. He got chewed out on the sideline by Daboll after heaving a ball to the end zone that was intercepted, and finished the game 4 of 10 for 68 yards, a passer rating of 24.2. Jackson is completing just 30 percent of his passes in the preseason. He has miles to go, and looks like right now, he made the wrong decision to enter the NFL. Another year of college, either at the University at Buffalo or as a transfer someplace else, would have benefited him. He either got bad advice or chose not to listen to good advice. Even with all that being the case, the practice squad still might be an option for him. The biggest reason for that is the Bills might not be comfortable going with just Allen and Barkley at quarterback. Jackson at least knows the scheme and could be ready to serve as a backup on an emergency basis.

IDon’tTrustTheProcess asks: Tommy Sweeney is taking advantage of his opportunity this summer. Jason Croom may be on the physically-unable-to-perform list to start the season. Lee Smith is a lock, as will be Dawson Knox. Do you think the Croom experiment is over at tight end for the Bills?

Jay: I’ll disagree with the idea that Croom might start the year on the PUP list. He appears very close to getting back to full participation in practice, and with three weeks to go before the start of the season, should have enough time to get there. I don’t disagree with the thought that Croom’s spot on the roster could be in jeopardy. If the top three tight ends to start the season are Smith, Knox and Sweeney, that might squeeze Croom out. Keep in mind, the team should get Tyler Kroft back at some point this season, too. Croom’s best hope to make the opening-day roster might be tied to Knox’s availability, since the rookie has also missed extended practice time because of a hamstring injury.

Jay: I’m not ready to go there yet. Williams needed a big game against the Panthers, and got that with a nice touchdown catch. I still believe the Bills would want the sixth receiver – assuming they even keep that many – to be more of a backup to Cole Beasley in the slot. That’s why I’d put Ray-Ray McCloud and Isaiah McKenzie ahead of Williams at this point. The competition at receiver behind the top five of Beasley, John Brown, Zay Jones, Robert Foster and Andre Roberts will be one of the more important things to watch over the final two preseason games.

bk asks: What are the odds Stephen Hauschka is the kicker for the Bills against the Jets in the regular-season opener?

Jay: They are still pretty good. Bills coach Sean McDermott was straight to the point last week when asked if he was worried about Hauschka, saying simply, “no.” Fans are doing the worrying for McDermott, though, after the veteran kicker missed a 48-yard field goal against the Panthers. That comes after he missed a 34-yarder in the preseason opener against the Colts. Hauschka’s struggles date back to the end of the 2018 season, when he made just six of his last 11 field-goal attempts.

Ed Helinski asks: With his play against Carolina, has T.J. Yeldon redeemed himself and does he have a shot to make the roster?

Jay: The competition between Yeldon and Senorise Perry for the fourth running back spot is tied, with each losing one fumble this preseason. Yeldon did have a better effort against the Panthers, rushing seven times for 26 yards and catching a pass for 10 yards. Perry, who lost a fumble Friday, still has the advantage of playing special teams, but the race got closer. Thanks for all the questions this week!