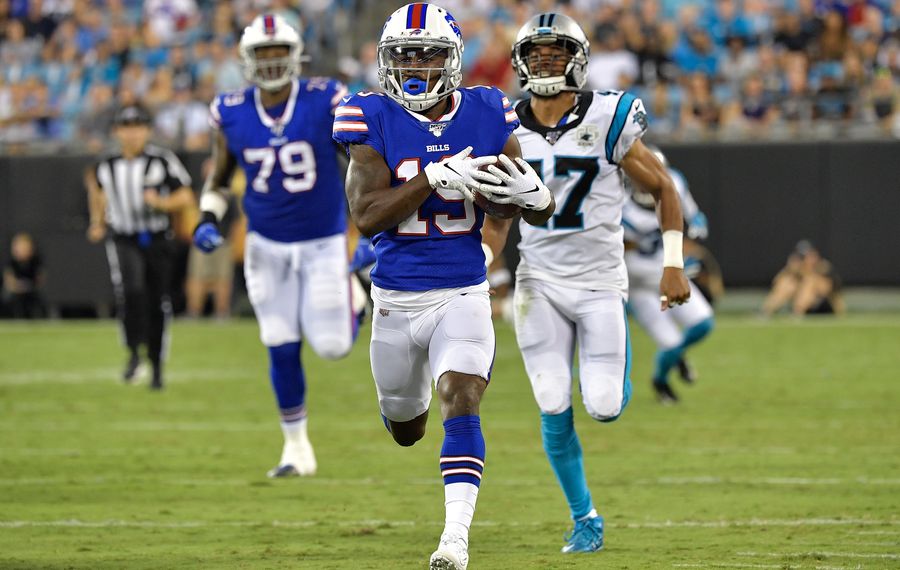 The battle for roster spots at wide receiver didn’t get any clearer Friday night, and that was a good thing for the Buffalo Bills.

Bills wide receivers made plays all over the field in the team’s 27-14 victory against the Carolina Panthers.

Here were top observations from the exhibition game at Bank of America Stadium in Charlotte, N.C.:

1. The battle for the sixth wide receiver spot is raging.

The Bills’ offense rolled up 230 yards in surging to a 24-6 halftime lead. Slot receiver Cole Beasley continued his hot summer by catching five passes for 44 yards from Josh Allen, a great development for the Bills’ offense.

The depth at receiver is looking encouraging.

Duke Williams, the 6-foot-3 import from the Canadian Football League, caught a 9-yard touchdown pass late in the first half from Matt Barkley. Williams had a slow start to training camp but had two good days of practice this week in South Carolina. The TD catch was a nice, leaping grab over rookie Javien Elliott. Williams also used his big body to catch two slant passes.

Meanwhile, Isaiah McKenzie flashed big-play potential for the second consecutive preseason game. McKenzie took a receiver screen pass 37 yards down the left sideline to help set up the Williams TD. And McKenzie got a good block from receiver Ray-Ray McCloud on the screen pass. McCloud had one drop but also made a good tackle from the gunner spot in punt coverage.

McKenzie had two catches for 61 yards against the Colts a week ago.

The Bills kept five receivers to start the season in 2017 and six in 2018. The expectation is it’s going to be six this year.

The top five seem set: John Brown, Beasley, Zay Jones, Robert Foster and Andre Roberts. Brown was held out of the game, and Roberts got the first snaps in his place. Foster got a handful of snaps in the first half but was not targeted. Williams got the next snaps on the outside, moving ahead of Cam Phillips on the depth chart.

You’d think the Bills will want to keep either the quick McKenzie or McCloud as a backup slot option to Beasley. But Williams, the biggest wideout on the roster, is making the decision tougher.

The starters on defense played two series, forcing a three-and-out drive and stopping the Panthers with a fourth-down sack by Trent Murphy. It was an impressive spin move by Murphy against the Panthers’ starting right tackle, Taylor Moten.

The second-team D-line came on gave the Panthers problems.
Defensive tackle Jordan Phillips did the most damage, getting a third-down hurry, drawing a holding penalty from first-round pick Greg Little and pushing up the middle to force another incompletion.

Shaq Lawson had a bat-down and crashed the pocket on a stunt to create a sack for Harrison Phillips. (Lawson also had one of those ill-advised, ticky-tack personal fouls on the QB.)

3. Ford starts at tackle, but don’t jump to conclusions.

Rookie Cody Ford got the start at right tackle due to the fact Ty Nsekhe did not suit up. Nsekhe pulled out Wednesday’s joint practice early. He has “a little knee tweak but he’s fine,” general manager Brandon Beane said on Channel 7 before the game.

Ford did OK. He held off Gerald McCoy on an early completion. He held off Bryan Cox Jr. on the 22-yard pass from Allen to Tommy Sweeney. But he also was beaten wide and gave up a hurry to Marquis Haynes on an incompletion.

Will Ford start at tackle in the opener? It’s still going to come down to who the coaches think are the best five players. Based on the past two weeks of practice, the betting here is they will decide Nsekhe is more valuable than Jon Feliciano or Spencer Long.

The second-team offensive line was, from the left: De’Ondre Wesley, Wyatt Teller, Ryan Bates, Ike Boettger and Jarron Jones. Kudos to Bates, the undrafted rookie from Penn State, who saw time in practice this week at both guard and tackle.

Newton, Kuechly and most of the other Carolina starters also were held out of the exhibition opener last week. Most teams hold out their key starters from the fourth and final exhibition game. So by their actions, the Panthers are acknowledging their key veterans need only one game appearance – in the third exhibition – to be ready for the regular season.

Panthers season-ticket holders who sit in non-club seats in the lower bowl pay an average of between $120 and $230 a game, not counting their one-time personal seat license cost (which is roughly between $6,000 and $25,000).

There is rampant speculation that the preseason will be shortened under the terms of the next collective bargaining agreement between the NFL and the players. That’s an idea that’s roughly three decades overdue. The current CBA runs through the 2020 season.

Starting in place of Newton at quarterback was Kyle Allen, undrafted out of the University of Houston last year. Carolina's No. 3 QB, rookie Will Grier, had a miscommunication with a receiver that produced a 70-yard interception return for a TD by Bills cornerback Kevin Johnson in the second quarter.

5. It was a mixed bag on special teams.

Roberts had an electric, 32-yard punt return. But Steven Hauschka missed a 48-yard field goal. Hauschka has been Mr. Automatic in practice. But now he has missed two in two weeks. He also made a 30-yarder.

Roberts got good blocking from the outside jammers on the return team – Taron Johnson and Kevin Johnson on the near sideline and Siran Neal and Captain Munnerlyn on the far sideline.
The success of the Bills’ offense didn’t move the needle on the punting battle much.

Cory Carter held onto the lead. Carter again was the holder for Hauschka. Carter had one OK punt for 38 net yards and a 4.27-second hang time then had an effective Aussie punt late. Corey Bojorquez had one good punt with a 4.86 hang time.

Rookie cornerback Cam Lewis took a hit to the head and neck area in a collision while making a routine tackle. He walked to the sidelines, but then he was wheeled off the field with his neck immobilized. Rookie tackle Garrett McGhin was carted off with a right ankle injury in the fourth quarter.

The first touch of the game for rugby star-turned-footballer Christian Wade produced a 48-yard catch and run to the Carolina 2. Wade, of course, had one carry for a 65-yard TD last week. Alas, everything Wade touches does not turn to gold. His next carry produced a 2-yard gain.

LeSean McCoy had six touches for 17 yards in his exhibition debut.

Center Mitch Morse was not in uniform and now has been out 20 days in concussion protocol. He was making practice snaps before the game.

“We do feel he’s trending in the right direction,” Beane said before the game. “We’re trying to be cautious. It’s the preseason.”