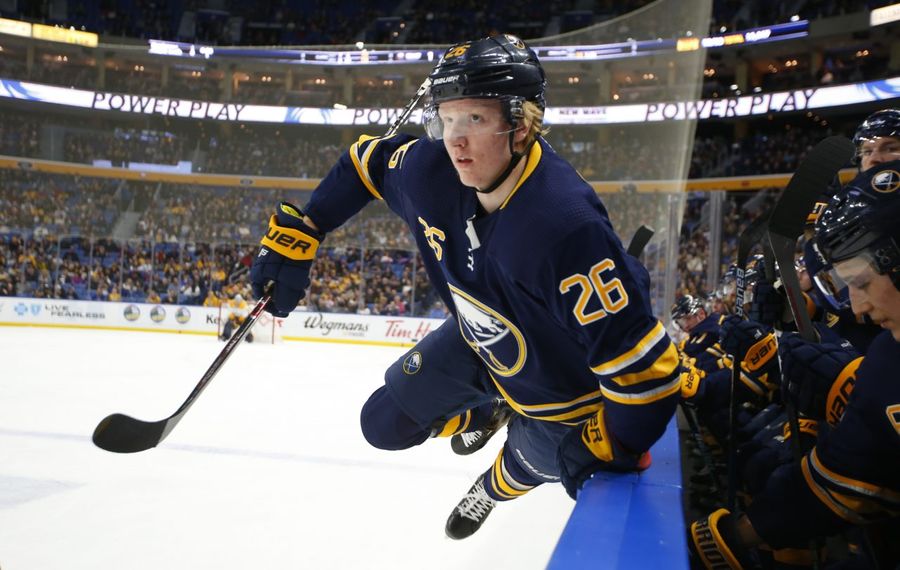 Buffalo Sabres fans longing for a return of the team's look of the past are finally going to get their wish – next season. As for 2019-20, the team is set to reveal its 50th anniversary alternate jersey Friday morning.

The team released a 10-second video tweet Thursday afternoon announcing that it will be returning to royal blue for its primary color for the 2020-21 season, a switch the fan base has been clamoring about for many years. The 50th anniversary sweater, which the team's tweet indicated will include gold, will be revealed on its Twitter page at 10 a.m. Friday.

But this year, we’re going gold. Tomorrow at 10 a.m. we reveal our #Sabres50 uniform. pic.twitter.com/Wq0RlqtSrh

Captain Jack Eichel weighed in on Instagram, commenting on the team's post by saying, "This is gonna get the fans GOING."

A version of the third jersey was leaked on Twitter last month through Seattle-based Icethetics, a well-known website that has covered hockey jersey changes for more than a decade.

That jersey is primarily white, with the gold accent stripes matching the color the Sabres having been using on all their promotional materials for what the team has dubbed its "Golden Season."

Did the #Sabres50 third jersey leak today? Plus, a possible look at the #LetsGoDucks orange Adizero alternate.

Royal blue and gold were the Sabres' primary colors from the birth of the franchise through the end of the Memorial Auditorium era in 1996, but the closing of the team's beloved original home marked the beginning of many jersey changes over the next 20-plus years.

The Sabres changed to black and red for the 1996-97 season when the team moved to what is now known as KeyBank Center.

Those jerseys, dubbed the "Goatheads" by late Buffalo News hockey columnist Jim Kelley, were worn through the 2005-06 season, when the Sabres advanced to the Eastern Conference final before losing to Carolina.

The franchise returned to blue and gold for the 2006-07 season but switched to navy blue and a flying Sabre design dubbed the "slug." It proved unpopular and the traditional circular crossed swords logo return for 2010-11, albeit still with navy blue as opposed to royal.

The Sabres used royal blue as an alternate jersey in 2010-11, with a script "Buffalo" across the front that many fans found reminiscent of the days of the AHL Bisons.

The royal blue discussion has been a nonstop topic on social media for many years. An apparent breakthrough was made in recent weeks when fans started to notice caps and other items with the color on sale at the newly expanded Sabres Store in the arena.

The team is unable to change its primary jersey for this season because it last made minor changes in 2017 when the NHL switched manufacturers from Reebok to Adidas. The minimum three-year window expires after this season, allowing the switch to royal blue for 2020-21.