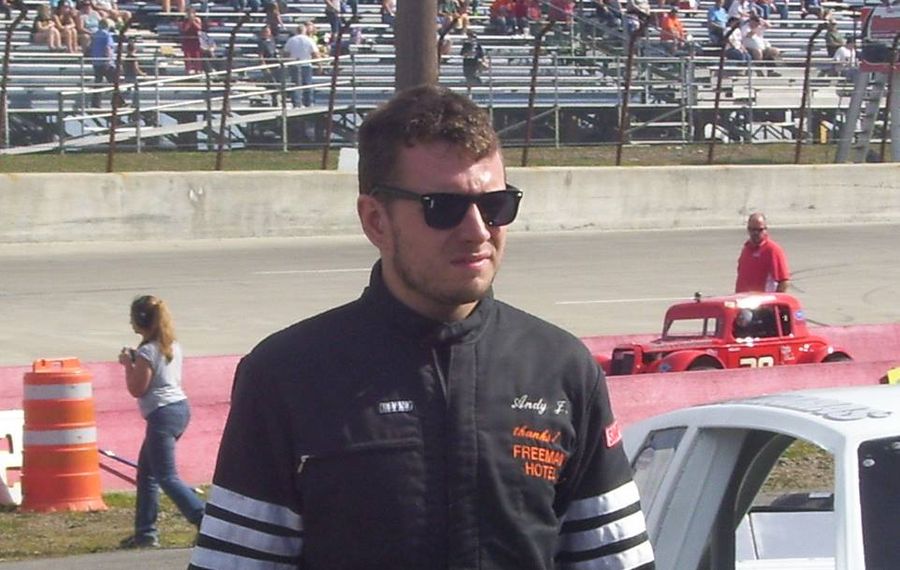 Andy Jankowiak had a very personal and emotional bucket list item that he tried so hard to check off earlier in his Race of Champions Asphalt Modified Series career. He longed for a victory in the Tommy Druar/Tony Jankowiak Memorial 110 held annually at Lancaster Speedway, now New York International Raceway Park.

Finally last August, Jankowiak came though with the win in this prestigious event and hopes for another when the race gets the green flag this Saturday at NYIRP.

Therefore, it was understandable how important it was for Andy to win this race. When he did, it triggered an outpouring of emotion in Victory Lane rarely seen in the past at the Gunnville Road speedway. It included numerous family members and well-wishers.

"When I was trying to win the Tommy/Tony race I tried not to think about it too much on race day but in my mind I just kind of had to make sure that I stayed focused," Jankowiak said. "I had to just make it another race. But once the checkered flag dropped I could kind of exhale for a little bit and see the family there. Everyone was just so overwhelmed.

"It was a very special moment in my career. It was just really nice to share that with the people that I love. It's nice to get together once a year and celebrate the lives of Tommy and Tony."

Jankowiak remembers how the members of his family and friends were just as thrilled and as emotional as he was immediately after the victory.

"It was a crazy race," Jankowiak said. "I remember that I don't know how my family was doing up in the stands but I was on pins and needles in the car the whole time. So the race was a close one and wasn't in hand until I crossed the finish line and took the checkered flag. Then I had to shift back and remember how special the accomplishment really is because it was Tommy/Tony night.

"It was a roller coaster of emotion that took me the rest of the night to really comprehend everything that we accomplished that night but I could see it on the faces of everyone that is in my family and friends especially my mom (Debby Jankowiak)."

In the overall ROC Modified picture Jankowiak has had a sensational 2019 season, scoring three wins and he currently holds down the point lead heading into this Saturday's event. Jankowiak drives the No. 12X machine for Tom McGrath and Bud Dreher.

"It's been going wonderful so far this year," Jankowiak said. "The car's been excellent. The team's been working really well together. We've been firing on all cylinders. We've won races at Lancaster, Spencer and Chemung this year."

Jankowiak's victory this season in the Ol' Boy Cup 60 at NYIRP on June 27 was also special as it served as the track's 2019 stock car season opener. For much of the recent offseason due to the track being up for sale it appeared that Lancaster may not open at all. When new owners purchased the facility in May, it saved the track and the current season.

"It's always special to race at Lancaster because it's always been home to me," Jankowiak said. "We were all nervous this year. We weren't really sure what was going to happen."

Jankowiak also scored an historical first of sorts, recently winning the first ever race in the newly formed ROC TQ Midget Series on Aug. 3 at Chemung. He drove the Jim Smith owned TQ Midget that evening.

Jankowiak feels that his team is arriving at NYIRP this Saturday on top of their game.

"Tom (McGrath) does all the car maintenance and Bud and I work on the car setup. Tom won races and championships when he was driving and Bud has been around racing quite a while working a long time ago with helping Merv Treichler build cars. It's been a total team effort all the way and I'm just in a really good situation over there with the No. 12x deal."

The ROC Super Stocks, Street Stocks and NYPA TQ Midgets round out Saturday's card at NYIRP.

When the DIRT.car 358 Modifieds take the green flag Friday at Ransomville Speedway, Sanborn's Chad Brachmann will be seeking his third consecutive feature race victory at the Niagara County dirt oval. In recent weeks, Brachmann has been both lucky and good.

Last Friday, Brachmann was the opportunist inheriting the lead when the lapped machine of Jesse Cotriss spun in front of the top three runners, Erick Rudolph, Mike Bowman and Mat Williamson. All three were collected in the incident.

Brachmann, running fourth, inherited the lead but then had to hold off the determined efforts of other challengers over much of the remaining distance. Rudolph rallied to finish third and holds a 23-point advantage over Williamson in the Ransomville 358 Modified standings with just three races left.

On Aug. 2, Brachmann dominated that race leading all 30-laps of the headline event.