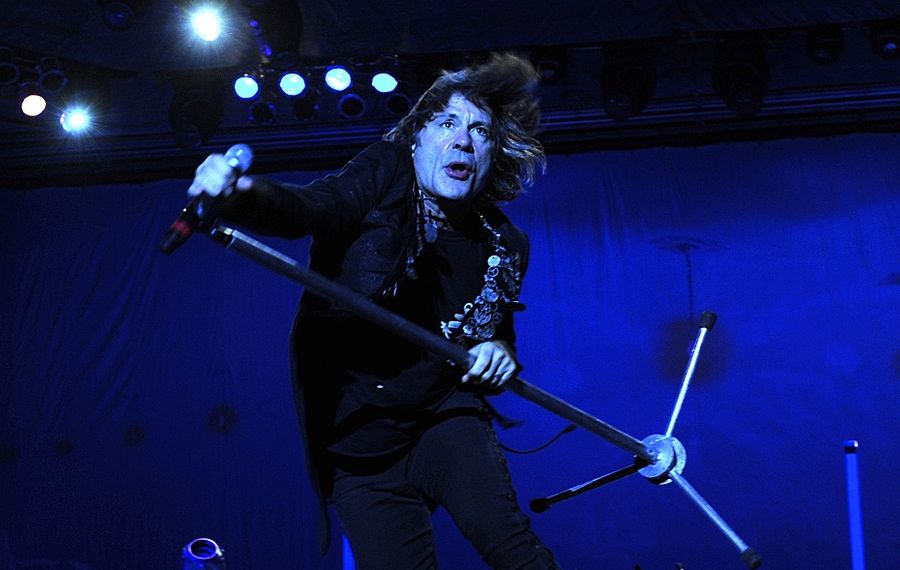 “Scream for me, Buffalo!”

No, that was never going to be a problem for us, Bruce. We’d been waiting for this for a long time.

Iron Maiden vocalist and frontman extraordinaire Bruce Dickinson exhorted the faithful packing KeyBank Center on Tuesday evening to make their pleasure known with full force throughout the band’s show. But Dickinson and his fellow Maiden men had us from the moment the lights went down and a recording of UFO’s classic “Doctor Doctor” came blasting through the PA. They gave us a full working-over, pummeling us into a state of frenzy with an intense, magical stage show that ably matched the band’s intense, dramatic metallic gallop and multilayered, melodic, minor-key pomp.

For Iron Maiden fans, Tuesday’s stop on the “Legacy of the Beast” tour was an affirmation of their long-held belief that, in the world of classic heavy metal, no one does it better than their boys. Though there was no new album to promote and celebrate, the stalwart British sextet offered an audio-visual companion to the recent uber-successful video game that gave the tour its name, compiling a career-spanning 2-hour set that emphasized material from its three most popular albums (in the U.S., at least) – “The Number of the Beast” (1982), “Piece of Mind” (1983) and “Powerslave” (1984). 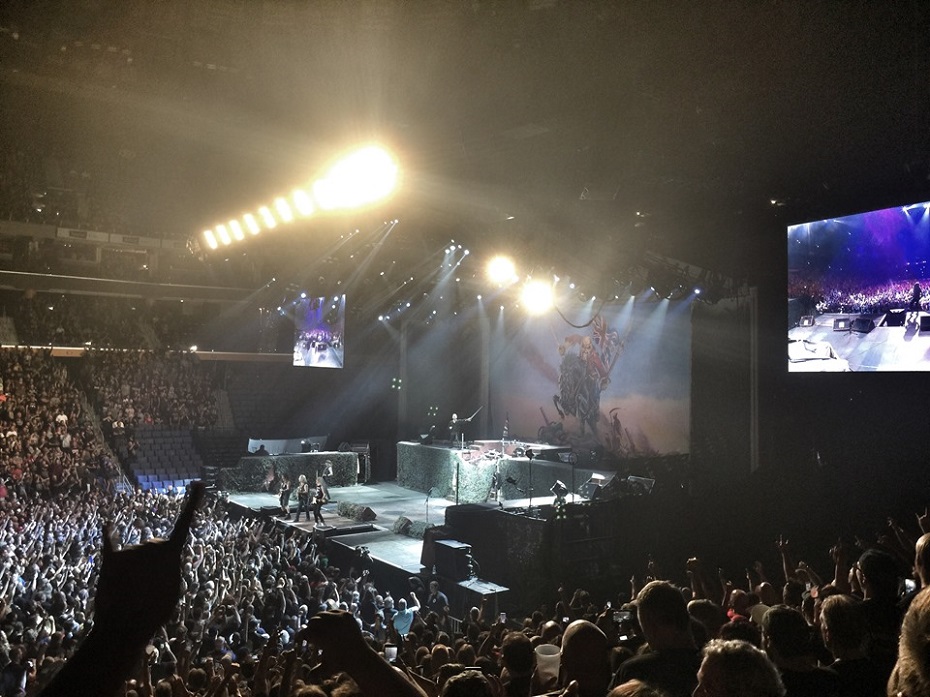 It was at once deeply moving and faintly ridiculous, majestic and grandiose, intense and silly. And it was all delivered with a nod and a wink by the brilliant ringmaster Dickinson, whose only equal in the exuberant, whirling dervish frontman category is quite likely Mick Jagger, the man who wrote the original playbook.

Through a series of costume changes to match the ever-evolving set pieces that accompanied every song in the 16-track set, and with the aid of tune-appropriate props that included twin flame-throwers, a massive Icarus statue, a red-coated ghoulish mascot on stilts – that would be Eddie, Iron Maiden’s undead best friend from the very beginning – and a bomber plane with spinning propeller hanging over the stage during opener “Aces High,” Dickinson offered us a master-class in high-octane showmanship while belting it out in a keening, near-operatic high tenor that belied his 61 years.

Dickinson may be the primary conduit of Iron Maiden’s delicious grandiosity, but the band’s music has always been about the relentless gallop of the rhythm section – bassist, founder and primary songwriter Steve Harris and virtuosic drummer Nicko McBrain – and the manner in which the wall-of-guitars summoned by Dave Murray, Adrian Smith and Janick Gers weaves intricate harmony and indelible melody between soulfully shredding solos. So, as Harris said during our recent phone interview, “It’s about the music, first and foremost,” and the bombastic show serves as icing on the blood-red cake. 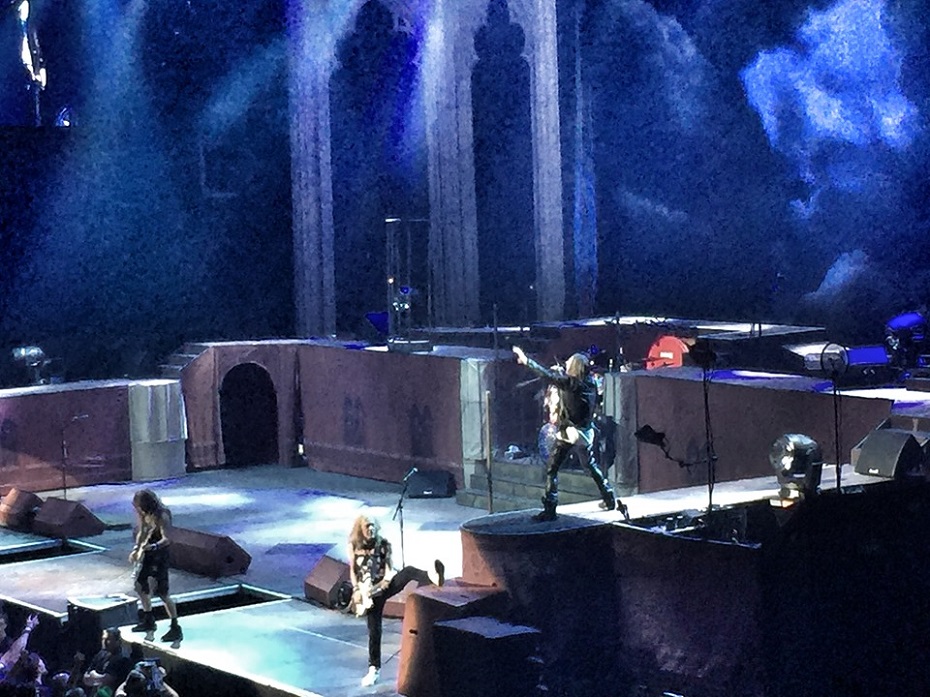 Maiden’s sturm und drang delivered extremes of emotion right out of the gate, as the band moved from the jet-fueled intensity of “Aces High” into the icy gallop of “Where Eagles Dare,” Dickinson wailing away atop a rear-of-stage riser flanked by images of snow-capped Alps, as the three guitarists hunkered down for a harmonized onslaught that eventually erupted into a majestic Murray solo.

“2 Minutes to Midnight” found Dickinson ordering the crowd to sing along with the doomsday chorus, and we willingly complied, the song’s indelible Adrian Smith riff leaving us little choice. “The Clansman,” a mini-epic deep-cut, laid bare Maiden’s prog-rock roots. A pair of classics from the “Piece of Mind” album – “The Trooper” and “Revelations”- sealed the deal, making it clear that, in its 40th year as a touring band, Iron Maiden is hitting yet another musical peak.

“Fear of the Dark,” “The Number of the Beast,” “Flight of Icarus,” “For the Greater Good of God,” “The Evil that Men Do,” “Run to the Hills” – these epic story-songs were presented as movements in a metallic symphony, staging, lights, sound and props converging to serve a dramatic arc.

It was brilliant, it was louder than hell, it was awe-inspiring, and it was the greatest excuse to “throw some goat" most of us have had in quite some time. Don’t wait so long to come see us again, Iron Maiden. We've missed ya. 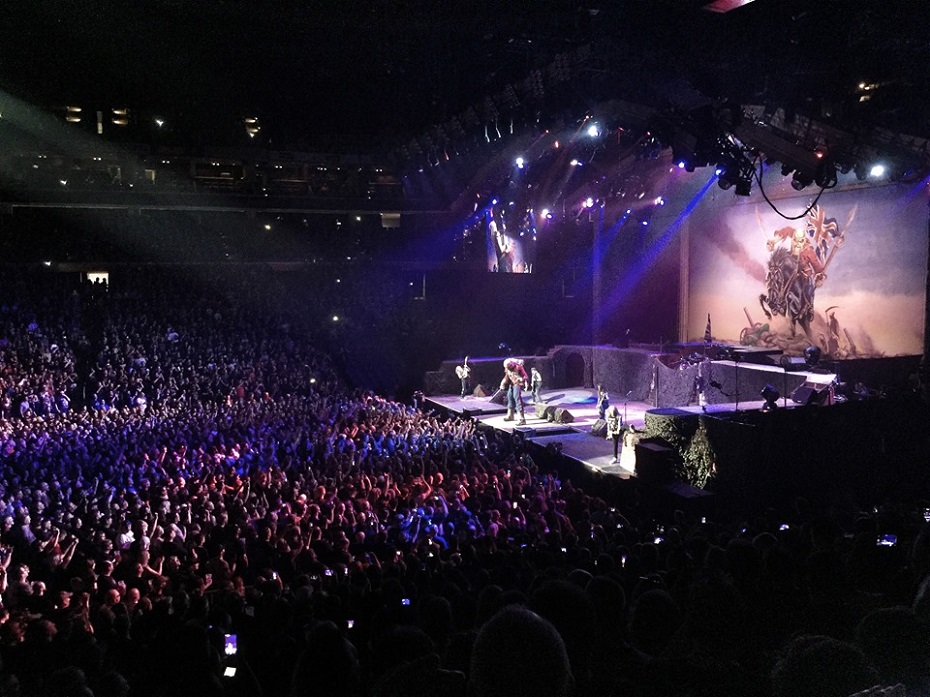