The walleye of Lake Erie were in the spotlight again as the 11th Annual Lake Erie VIP Fishing Day was held last week out of Dunkirk in Chautauqua County, and the result was one of those win-win situations that you dream about – especially when the fishing is as good as it is right now.

“The walleye fishing is absolutely incredible,” said Capt. Jim Skoczylas of Sheridan, operator of Ultimate Adventure Sportfishing out of Cattaraugus Creek. “Everyone should be catching fish today.”

The combination of relatively calm waters and active walleyes made for an enjoyable morning as a long list of elected leaders and officials from Erie and Chautauqua counties hopped on boats to see what the Lake Erie fishery is all about. Many were repeat customers, already in tune with the significance of this Great Lake to tourism. There were also a fair number of rookies, enjoying their first time on the water catching walleyes.

The VIP Day is sponsored by the Fishery Advisory Boards of Erie and Chautauqua counties, the tourism offices of both counties, and the Eastern Lake Erie Charter Boat Association.

What started off as a relatively small gathering more than a decade ago has grown to nearly 100 reeling participants learning to appreciate the value of time on the water and time outdoors. The event was made possible thanks to a large group of Lake Erie charter guys, and it continues to grow bigger every year. With the guidance and expertise of the charter community, attendees came to realize the value of this industry to the overall tourism effort. They are the true ambassadors that entertain and educate the general public and the outdoor community. 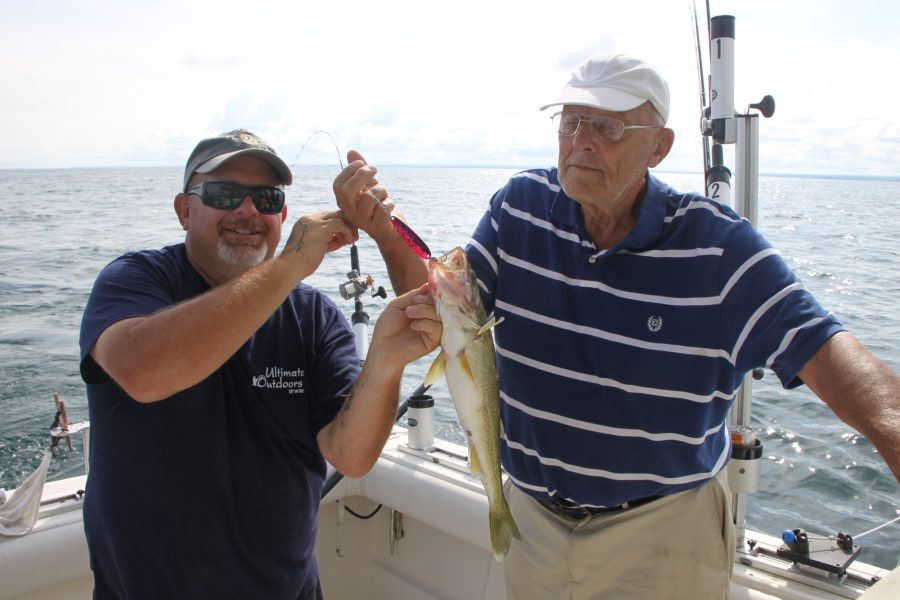 We had a full boat heading out of Dunkirk on Wednesday morning with Skoczylas at the helm of his 31-foot Tiara. His capable mate was Tom “TJ” Yetzer of Warsaw, a captain. Also on board were Sue Guenther, president of the Southtowns Walleye Association of WNY, Joe Haeick of Tonawanda and his wife Ariah, Harold Geiger of Grand Island (an 80-something fisherman taking his first trip out of Dunkirk) and Dave “Forrest Fisher” Barus of East Aurora, a writer, photographer and fish promoter.

Barus was in the middle of hosting an annual Chautauqua Media Fish Camp that was also tied in with the Lake Erie VIP Day experience. Writers from New York, Pennsylvania, Michigan, Ohio and Virginia were in town to sample Lake Erie and Chautauqua Lake. The press army would be taking their words and photos back to their respective homes as evidence to help tout the area’s fisheries. They were all smiles when sipping coffee and eating doughnuts before receiving boat assignments for Day 2 of Fish Camp.

Skoczylas pointed the boat north as he came out of the harbor, toward his home base at Sunset Bay. Methodically, they worked the back of the boat putting out baits via downriggers, lead core lines off planer boards and dipsy divers as he worked the depths from 75 to 95 feet of water.

The divers, often referred to as poor man’s downriggers, were set back 150 feet on a No. 3 setting on the starboard side. The port side diver was 175 feet back on a No. 3.5 setting. Both were the lead to a Hawken spoon, a lure from the West Coast that is making a name in the Great Lakes. The patterns that caught fish were Wonder Bread, Kevorkian and Reaper.

Other lures were a variety of stickbaits that featured Renosky, Long A Bombers and Bay Rat Lures. 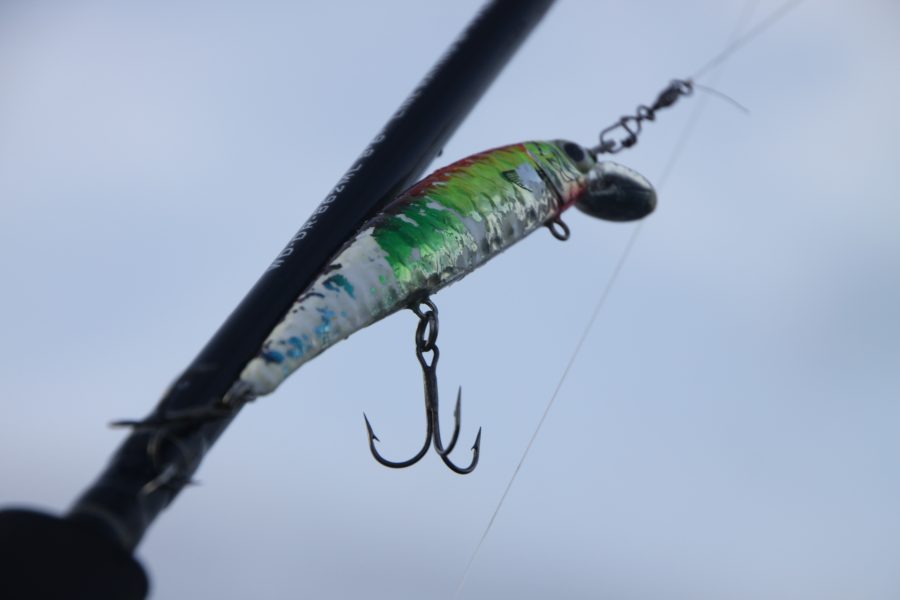 This is what a favorite walleye lure looks like after a month of action ... and it's still catching fish. (Bill Hilts Jr./Buffalo News)

“The 35th Anniversary Southtowns Walleye Derby lure was a real hit this year,” said Skoczylas, the first vice president of the Southtowns club. “In fact, the winning fish in our derby was caught on it. We are going to have to place another order for some more of these lures, which is basically a blue and yellow/chartreuse long shallow runner. They catch fish.”

Skoczylas showed us a couple of the lures that have been suffering the wrath of the walleye. A Renosky Cheap Sunglasses and purple-colored Long A Bomber were missing a bunch of paint from the constant biting of the hungry walleyes fooled into striking a fake snack.

We trolled to the mouth of Cattaraugus Creek and then worked our way back, just in time for a walleye lunch at the Northern Chautauqua Conservation Club, a fitting end to a near-perfect day. How many fish did we catch? We lost track. The first six were tossed back into the lake when the captain didn’t think we wanted any. What was he thinking? We ended up with about 15 in the box for our short morning trip, plus a few released silver bass and a couple of “shorties” less than the 15-inch minimum size for walleye. It was consistent action for the duration of the trip, a sampling of what this lake is capable of.

Back at the Con Club, after local dignitaries praised the fisheries, the charter captains and the cooks, Dr. Jason Robinson, the Lake Erie unit leader with the state’s Department of Environmental Conservation, gave a brief overview of the walleye fishery itself.

With a burgeoning walleye population estimated at 45 million fish, lake managers from four states and one province are working together to analyze the tremendous amount of data that is coming their way through an acoustic telemetry program that has seen more than 1,000 fish inserted with transmitters to determine migration patterns, spawning site information and more.

“Doing the research is the fun part,” Robinson said. “Now the harder work begins. We need to translate those research findings into improved management practices.”

The formal part of the program concluded with an in-depth dissertation on the threats of wind power in the Great Lakes by Rich Davenport with the Erie County Fisheries Advisory Board. Check out his YouTube video entitled “Folly! Wind Turbines in Lake Erie.”

The event was another success for all involved, a win-win.