A black person can expect to live five years less in Erie County than someone who is white, and nearly seven years less than the New York State average.

The mortality rate for a black child in the county is more than twice as high as for a child who is white – and that black child is almost five times more likely to live in poverty.

Almost half of black children in Erie County do.

“This is a crisis,” the Rev. George F. Nicholas said. “We want to change the narrative. We need to figure out a way to integrate the African American community into the resurgence of this region.”

To do that, Nicholas, pastor at Lincoln Memorial United Methodist Church in the Masten District, and other civic leaders have joined forces with health care executives and the University at Buffalo. They have been working for the last five years to solidify an African American Health Disparities Task Force that has now reached critical mass.

Nicholas is the convener of the task force, now on a path toward creating a Buffalo Office of African American Health Disparities.

Erie County Medical Center has arranged to help with the effort, including financially.

“Data shows that you're going to live about 10 to 12 years less there than outside of those ZIP codes,” Nicholas said.

A Buffalo Office of Health Disparities will bring together those working individually or in groups to address yawning gaps in health outcomes.

The effort looks to encourage programs and policies that address conditions aside from direct health care that impact longevity and wellness in neighborhoods, communities and families. These “social determinants of health” include ease of transportation and access to healthy foods, quality affordable housing, a strong education, and safe, well-maintained parks, pedestrian trials and fitness centers.

Income – and poverty – are the major forces in shaping social determinants.

Dr. Kenyani Davis – a primary care doctor with Community Health Center of Buffalo and member of the task force – estimated that 10% of health can be traced to genetics, an equal amount to clinical care, and 80% to social determinants.

“What's needed here in this academic climate is not necessarily just more health care delivery,” Davis said, “it's stepping back and saying, ‘How do we look at the totality of this entire population, and actually start to improve it?’ ”

Tanya Goffe wants to be involved in the burgeoning effort.

Goffe, 43, a single mother who lives with her four children, ages 16 to 27, moved from the West Side to the East Side in March. She discovered a new community where the impact of poverty was much more pronounced.

"It feels like the tale of two cities," said Goffe, a nursing assistant in a North Tonawanda nursing home.

Goffe said she works about 60 hours a week, with overtime, to make ends meet. She can’t afford to call in sick. All of her kids have jobs, too. Hectic family schedules mean everyone has to catch meals on the run. Her youngest son, 16, has food allergies so she goes extra miles – literally – to buy fresh fruits and vegetables at grocery stores on the West Side because they’re not readily available near her new home off Humboldt Parkway.

The family is on state provided health insurance. Goffe and her youngest son have asthma. The $34 she needs for a copay for her inhaler hasn’t been an option for the last couple of weeks because of other expenses, so it sits at her pharmacy.

“We can’t keep repeating this cycle,” she said, “or we’ll get nowhere.” 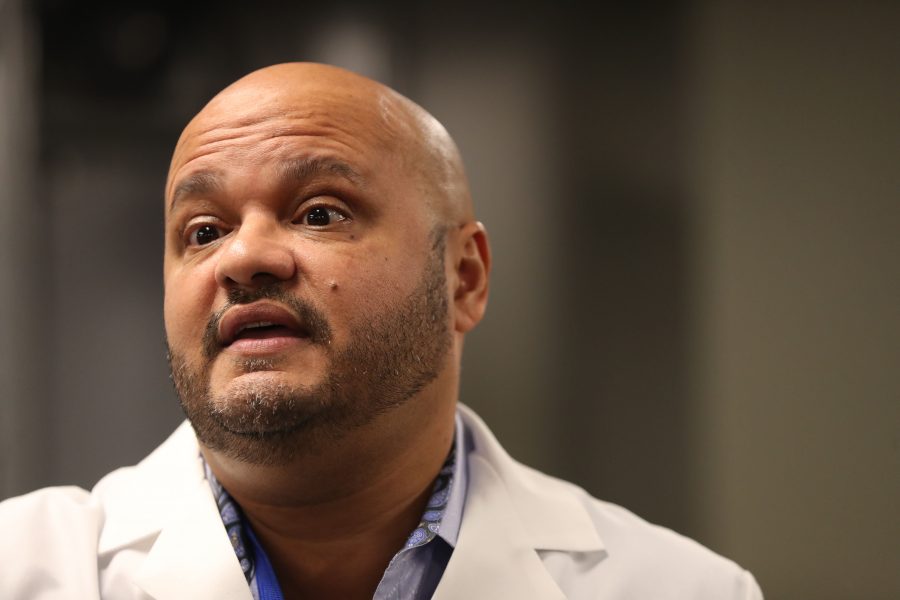 Dr. Raul Vasquez leads Urban Family Practice and related companies that have become a model for how the social determinants of health can be addressed in a medical setting. (Sharon Cantillon/News file photo)

UB has become a major player on the Health Disparities Task Force, including representatives from its medical, nursing and dental schools, as well as the schools of law, management, public health, social work and urban studies. UB looks to create a center of academic excellence in which researchers will use evidence-based clinical trials to learn what measures and programs get the best results.

This matters to everyone in the region, said Lawrence Zielinski, executive in residence for health care administration in the UB School of Management.

“Studies indicate that a third of the direct care costs spent in the African American community are directly related to health disparities,” Zielinski said. “We spend all of our money on the back end of a problem. When are we going to start a reallocation of our dollars on the front end of the problem so that we can prevent it from happening?”

Urban Family Health – a primary care practice with offices on the East and West sides that serve about 18,000 patients – has become a model for what task force leaders envision. The practice focuses on the most common health challenges across the United States – heart disease, diabetes, asthma and mental health – and the social determinants of health that make them harder to treat.

Workers transport patients to and from medical appointments when needed. Those patients also have access to a food pantry, gym, nutritionists, chiropractors, lab services and, within the past several weeks, behavioral health counselors – all on clinic property. A pharmacy will be added soon. Patient navigators reach out often to patients by phone to encourage them to keep appointments, continue medication and take other steps toward wellness.

“It's hard work,” Nicholas said. “It's generational. I don't want anyone to feel like within the next year, we're going to see dramatic statistical changes. It's going to take a while. Systemic and historical trauma related to structural racism is real. It's had a devastating impact on the black community and the data is showing that. We've got to try to turn that around.”

Health outcomes in most African American communities across the U.S. reflect those of Erie County, which helps explain the growing movement to address racial health disparities across the nation.

The public is welcome to attend the conference Friday night and Saturday at the UB Jacobs School of Medicine and Biomedical Sciences. It is free, though organizers ask attendees to preregister at millenniumcc.org, where they also can find more details.

Health disparities between blacks and whites are striking in Erie County.

Percentage of female Medicare enrollees 65-74 who had a mammogram

Percentage under 18 in poverty