Driving into Stroh’s, the first thing to spot is the tail of an airplane crashed into the roof. We were told it’s from a real plane, as is the protruding, real fake leg, donated by a former customer.

It’s just one of the fantastic quirky elements of the iconic beach bar that sits on Lake Erie.

Originally called Eddie Stroh’s, it shortened to Stroh’s. The bar changed hands about a year ago. Smartly, the new owners kept everything pretty much the same, including the cheap drinks, food, eclectic décor and bartender George Salim, who has been slinging drinks at Stroh’s since Eddie Stroh opened in 1967.

To meet this celebrity, Salim works Sundays through Wednesdays until close. (We were told “he's a tough guy nobody messes with.”) The namesake George Burger ($4.50), is a quarter-pound burger on a toasted Costanzo's roll and, “almost as famous as George.” 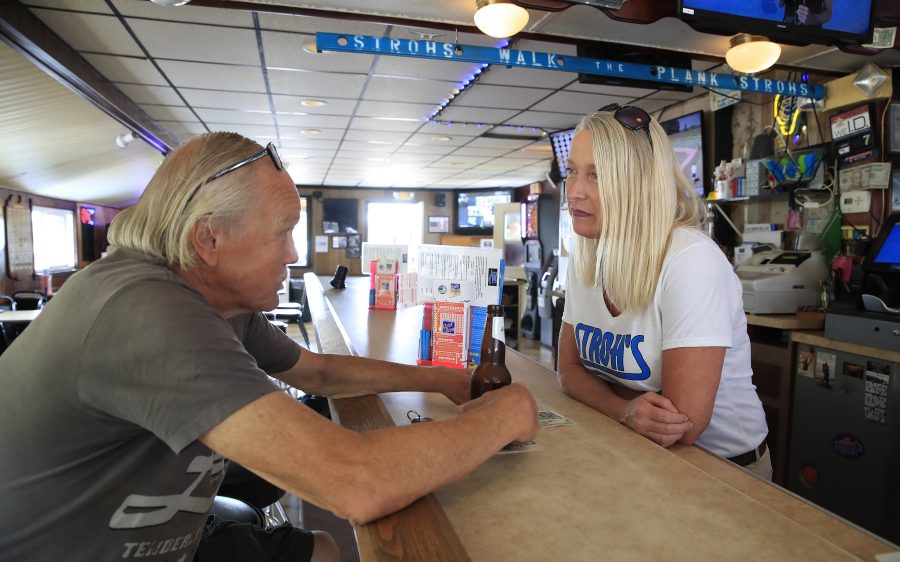 The indoor bar is open year-round. During the summer, giant droning fans (sounding much like a plane), cool it down. The patio bar stays open as long as weather permits.

Stroh’s dress code is the best. Basically anything for the beach, shoes optional. Spotted were hilarious T-shirts: “I like big boats and I cannot lie” and “You're looking at the world’s greatest grandpa.”

We love that Stroh’s is the great equalizer. From big shots in fancy boats to beach bums in shorts and tanks (like us), everyone gets the same benevolence.

The patio bar has a million-dollar view that includes sand, water and a gorgeous sunset. The mature crowd undoubtedly includes folks who have been coming to Stroh's for years. Regulars are greeted like long-lost family members. 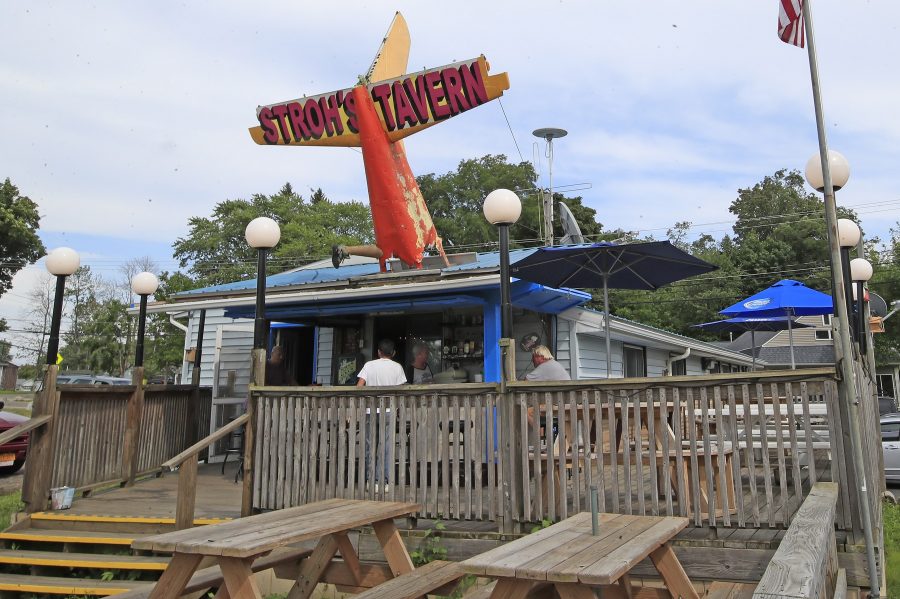 The back patio at Stroh's looks out on Lake Erie. (Harry Scull Jr./Buffalo News)

Drinks are blissfully basic. No angst about which craft cocktail to order. Have that vodka tea of your youth without feeling any shame. Well drinks are $3.25. Call drinks start at $5.

In addition to domestic cans and draft beers, Stroh’s keeps up with the times with local craft beers on tap. We saw Resurgence Blood Orange Saison, EBC Blueberry and a Big Ditch IPA, along with Leinenkugel’s summer shandy and the Sam Adams summer ale. Domestic drafts are $3, cans $3.25. Craft drafts are $5. Landshark cans, spiked seltzer cans (Bon & Viv, Truly) and Corona (regular, light and premier) are $4.

With prices so low, it’s a wonder Stroh’s offers a happy hour, but it does, from 5 to 8 p.m. Monday through Friday with $2.50 domestic beer drafts, domestic canned beer and well drinks. Stroh’s ups its game on Saturdays, serving the breakfast of champions: breakfast sandwiches, bloody marys and mimosas are $3 each, served until noon.

When hunger strikes, Stroh’s is ready with a perfect little menu that is so cheap, it feels like stealing. Salads (garden, julienne and a summer salad with dried cranberries and feta) are $3.75 to $6. Add chicken for $3. A grilled chicken sandwich tops out at $6.50. A beef on weck is $6.

The famous fried bologna, piled high with cheese and fried onions is $5.50. We lapped up an outstanding barbecue burger ($6) and a beautiful taco platter with three tacos ($6.50). We told the cook how we loved the burger. He replied “it’s homemade with Angus beef.” Ah.

Our favorite sign was in the ladies’ room. “Sandy toes take away your woes.” True, and the best way we can think of to keep summer rolling well into early fall.

Accessible: Yes, through the front door.

Pay: Cash only, ATM on site.

Quirkiness: Bathrooms are designated with silhouettes of  a Victorian lady and fella. An old rug hangs on the wall with a Stroh's logo designed years ago by a customer’s kid, who was told “make the guy bigger.” Apparently the original slim dude wasn’t a true Stroh’s Tavern representation. Oddly, he is under a lamppost, tossing what looks like a coin. Need readers? Stroh's keeps them handy behind the patio bar in a bucket.