More urban than Nashville is how the pre-concert playlist flowed on Monday night in Gusto Grandstand at the Erie County Fair. This was a sign that the show about to be underway was not a usual country music concert.

The sold-out crowd with track-side and way-up-in-the-grandstand seats was there to see rising country-western star Kane Brown, and they were singing enthusiastically along with the classic hip-hop and pop hits before he hit the stage. The party vibe was strong.

Kane released his second recording late last year, "Experiment," a chart-topping work that spans new country and R&B sounds. This tour is his first as headliner, and he did mention during the night that he's also touring as an opener for Jason Aldean through September. There was no opening act, so Brown and his band got right down to business, putting on a solid hourlong show.

The youngest fans in the front section who spotted Brown backstage and began screaming at the first sight of him. The band members walked out, each holding up a red solo cup in a "cheers" salute.

Brown let the band get some licks in, impressive and powerful decibels ushering forth, before appearing at the top of steps onstage, dramatically posing as he sang opener "Baby Come Back to Me" in his rich baritone. Dressed in his own merch, black KB ball cap and hoodie, he sauntered into "What Ifs."

[Related: Basics to know about the Erie County Fair | Smiles on opening day 2019] 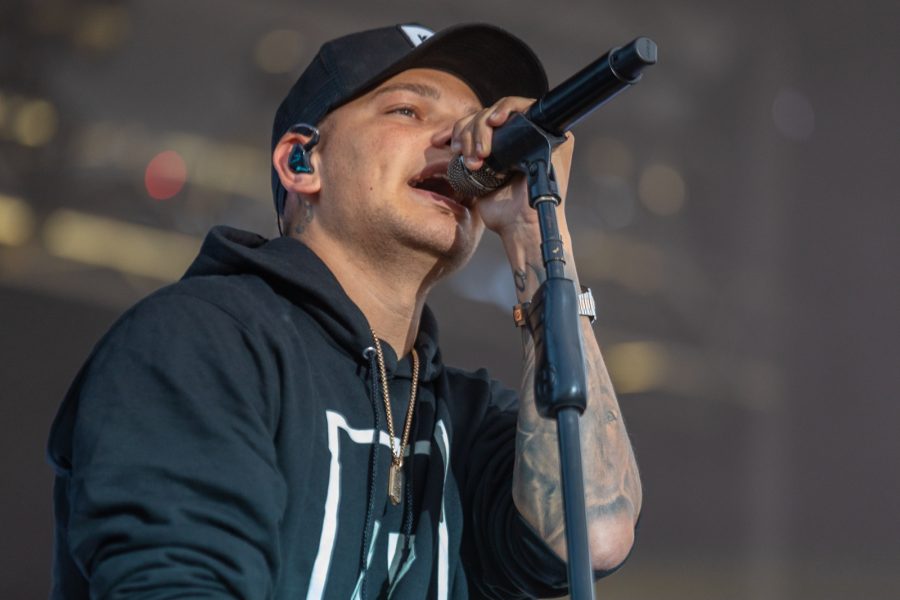 Kane Brown's songs became very personal at one point during his concert at the Erie County Fair. (Don Nieman/Special to The News)

"Where my party people at? It's a Monday, but we can party, right?" Brown asked as a video of him and friends cavorting in a big-box store (that shall be unnamed), at a house party, and on a lake played during "Weekend." Brown had no qualms throughout the show about stopping, stooping and scooping up cellphones to make selfies with fans. He's a hand-shaker and an autograph-hound pleaser who never misses a beat as he attends to the secondary business of making fans happy.

"Used to Love You Sober," Brown's first No. 1 hit from his debut release in 2016, was prefaced by him thanking fans "for being diehard from day one." "Thank you so much for making my dreams come true," he said at the song's end.

"We're gonna get real serious," Brown said before encapsulating his oft-publicized, difficult childhood – and the racism he has experienced as a biracial person. "Heaven" was introduced as "the most important song I ever wrote. No one is better than anybody."

Equally emotional "Homesick" was introduced by a video of military men and women greeting their families. Brown, seated on a stool, was accompanied only by keyboard before Thorson joined in. Kicking up the energy, Brown asked, "Are there any rodeo fans out there?" before his playful love song "Like a Rodeo" with the classic lyrical line, "I picked you up with a cowboy nod at the hotel bar."

During a medley of classic covers, "Stand By Me," into "Beautiful Girls," Brown removed his hoodie, tossing it into the arms of Erin Maggiore. She was holding up her daughter, Aubrey Maggiore, age 7, who had a bright pink sign. "Today is my first concert!" it read. She's been a "fan for a couple of years," she said, an adoring fan from his illustrious start.

Aug. 12 at the Gusto Grandstand at the Erie County Fair