Surveillance video proved decisive Tuesday as a judge found a fired Buffalo police officer not guilty of harassment in the bar fight that cost him his job.

Andrew T. Rechin's decision to throw a punch "was just as likely a reaction to a fear from harm" as it was an intention to harass someone, said Buffalo City Court Judge Diane Y. Wray.

Wray said that when she slowed the video, she saw that the victim of the punch, Denzel Fuller of Buffalo, had closed the distance between himself and Rechin, and it was reasonable for the off-duty officer to feel in danger -- as Rechin stated when he testified in his defense.

While the video proved Rechin struck Fuller, the assistant district attorney who prosecuted the case did not prove Rechin intended to "harass, annoy or alarm" him – the second element needed to find someone guilty of second-degree harassment, the judge said.

“The video speaks for itself," Flynn said, "and I respectfully disagree with the judge’s decision. The defendant clearly sucker punched the other man, and in my opinion he was clearly guilty of the charge.”

The count against Rechin was a violation, a category of offense even lower than a misdemeanor. A conviction was more likely to result in a fine rather than jail time. 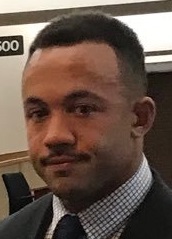 But Rechin wanted to be cleared so he could seek reinstatement as a Buffalo police officer. Still on probation, Rechin was fired shortly after the video showed he threw the first punch outside Coles, the popular spot on Elmwood Avenue, early on Oct. 31.

"We will absolutely fight for Andrew to get his job back," said Thomas Eoannou, the lawyer who defended Rechin in a two-day trial before the judge two weeks ago.

Said Rechin: "I'm just really happy that it's over with, and I will do whatever I can do to be a police officer."

He might have to turn to another police agency. The Buffalo Police Department does not intend to hire him back. A department spokesman said the outcome of the criminal case will not affect Rechin's employment status.

Rechin's troubles involved more than the fight. After the fists flew, investigating officers took Rechin's version of events and charged the other combatant, Fuller, with a felony on Rechin's belief that he had been stabbed with a knife.

But when Erie County prosecutors watched the video from a Coles surveillance camera, they saw no knife during the match between Rechin and Fuller. The cut on Rechin's forearm came from Rechin's cocktail glass, which shattered when the two men rolled to the ground, prosecutors said.

The actions of the Buffalo police, whose charges against Fuller led to six days in jail as he awaited further court action, are expected to result in a lawsuit against the city on his behalf.

It turns out that Fuller had a pocketknife. But Rechin never saw the knife before the fight, and it never came out as the men tussled to the ground. Even after they had broken apart and Rechin walked away, the knife remained in Fuller's pocket. It didn't come out until later.

The trial centered on the video, which begins with Fuller talking with the Coles security team. Then Rechin, dressed in jeans, a long-sleeved pullover and a cap on backwards, comes into view.

As for what prompted the punch, Fuller says he didn't argue with Rechin and doesn't remember what they even talked about. He said he had been in a friendly conversation with the security team and intended to drift next door to Louie's Texas Red Hots for food because, Fuller agrees, he was drunk. Then he was punched.

Rechin said that as he grew closer to Fuller, it appeared to him the security team was throwing Fuller out of the bar.

Fuller then turned to Rechin and said he recognized him as a cop "from Walden," Rechin testified. Rechin was assigned to the city's C District, with Walden Avenue being one of the district's major routes.

Rechin reared back and launched his right fist into the left side of Fuller's face. Fuller's counterpunch didn't land. Rechin's fist continued to flail as Fuller moved in to grab him. Both hit the ground. They got back up and went down again. Fuller's jacket came off. So did Rechin's cap.

When they separated, a disheveled Rechin can be seen striding without his cap back into the bar. Fuller can't be seen. He said he was looking for the phone that had been in his left hand.

A bar fight, a 'sucker punch,' and the video that got a Buffalo officer fired