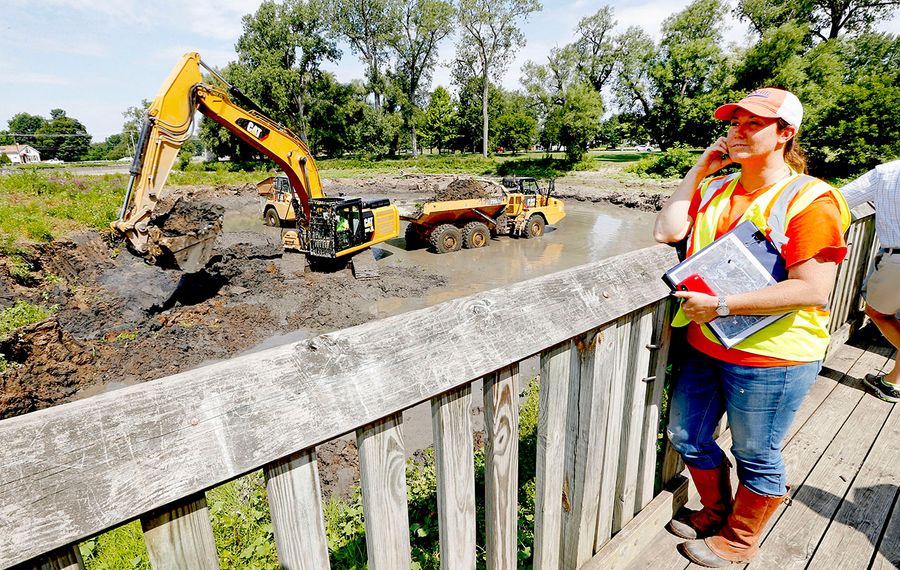 Carley Hill was talking last year with William Geary, commissioner of the Erie County Department of Public Works, when the topic of Como Lake in Lancaster came up.

"I said, 'What lake?' " Hill recalled, after she inspected the site. “All I saw was a peninsula straddled by two streams of water, and in some places the peninsula was 10 to 15 feet tall."

But the lake is in there somewhere. CaHill Resources of Akron, the company Hill founded in 2017, is in the process of getting it back through a dredging operation that eventually will remove 18,500 cubic yards of silt.

“Como Lake Park is an asset that not been touched for years,” said County Legislator John Bruso. “The magnitude of this project required the lake to be completely excavated. When finished, it will be a destination for everybody. It will be a lake again.”

Dredging began Aug. 5 and will continue through at least Sept. 14, Bruso said.

The process to put the "lake" back in Como Lake began in 2017 when the county replaced damaged lower-level gates in the lake dam at a cost of $150,000. The 4.5-acre lake was drained in May 2018 so sediment testing could be conducted. The entire project including the dredging will cost the county an estimated $400,000.

The dredging project now underway is more like an excavation, with heavy machinery taking down the swampy mess bucket by bucket. It uses public works employees from five county districts. CaHill provided three off-road trucks, three bulldozers and two excavators to remove and haul the silt. Hill called the dredging project “the largest earth-moving job of this construction season.”

Geary traced the public-private partnership to the county's fiscal crisis 15 years ago and the loss of 60 percent of the county's highway workers.

"I needed to invest in employee training, but I also needed equipment. CaHill brought both to us," he said.

“My goal is to provide resources and training for governments like Erie County," said Hill, who started her six-employee business after consulting with Women’s Business Center at Canisius College and Niagara Small Business Development Center at Niagara County Community College. "They then use their own employees to do the work. It’s an alternative asset management model. We give them what they need and teach them how to do the job.”

Como Lake Park, named after the Lake Como tourist resort in Italy, originally was established by the Village of Lancaster in 1923 and was acquired by Erie County in 1926 as the result of a special village election. The lake once was the jewel of Como Park, the county's third-largest park at 534 acres. It is fed by Cayuga Creek and features a small stone lighthouse that also has fallen into disrepair.

Bruso said returning Como Park Lake to its past glory was one reason he ran for the County Legislature in 2017. He anticipates restocking the lake with fish, noting that people already fish the creek streams off Bowen Road.

As recently as April 2015, officials from the state Department of Environmental Conservation gathered at Como Park Lake Grove on Cayuga to stock the lake with 650 yearling rainbow trout from the Caledonia Fish Hatchery.

The silt that is removed during the dredging will be repurposed to surface and grade the new Frank Maddock Sledding Hill, located near the lake in Como Park. The sledding hill is named for longtime environmental advocate Frank Maddock, 81, who has long advocated for the rehabilitation of Como Lake Park.

"I started writing letters and yelling and screaming years ago, and it finally happened,” Maddock said during a telephone interview. "I’m glad it’s finally getting taken care of."