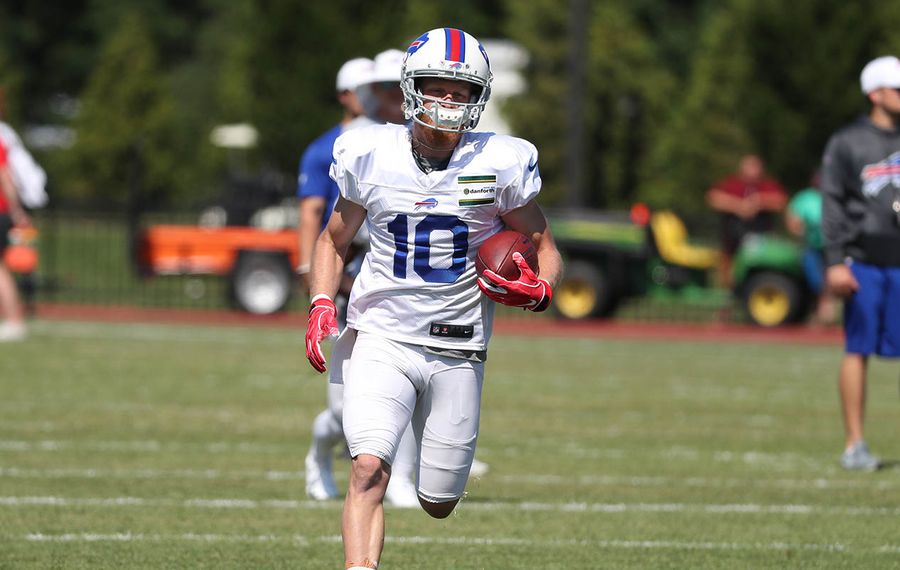 SPARTANBURG, S.C. – Here are my takeaways from the Buffalo Bills' first joint practice with the Carolina Panthers Tuesday at Wofford College:

The Bills’ new slot receiver continues to build a good connection with quarterback Josh Allen. Beasley showed off his quick separation ability in one-on-one drills against cornerbacks – it's not a fair fight – and gave Allen wide-open windows to target for completions. Beasley also caught three of Allen’s nine completions during team work against the Panthers. In the first 7-on-7 pass in the red zone, Allen hit Beasley near the goal line for a completion but safety Eric Reid popped the ball out and recovered the fumble.

The Bills’ starters failed to score on their two-minute drill. Allen hit two straight passes for a first down. But then there was a false start penalty, and Allen overthrew Robert Foster on a crossing route. Then Allen made a suspect decision in throwing incomplete for Zay Jones. On fourth-and-10 from the 35, Allen threw a perfect deep post for John Brown, but the receiver couldn’t hang on. It looked like a drop. Cornerback James Bradberry might have gotten a hand in late to force the incompletion.

Matt Barkley went 6 for 6 on his two-minute drill, capping it with a 10-yard TD strike to the back of the end zone to Isaiah McKenzie. On the previous play, Barkley hit Duke Williams on a 15-yard cross, and the big receiver drew cheers by giving safety Colin Jones a forearm shiver. The coverage by the Panthers’ second-team defense was soft, and the defensive lines weren’t going all out on the two-minute drills. Barkley was 10 of 15 in 11-on-11 work. He checked down a lot.

Second-year receiver Ray-Ray McCloud had another good-hands day. He made Allen look good by plucking a too-high quick throw near the line of scrimmage and made a couple other grabs.

The wideout corps had a few too many drops. Robert Foster dropped a deep ball from Barkley early. Cam Phillips dropped a cross from Barkley. David Sills dropped a good deep ball. The Bills did most of their offensive work from three-receiver formations.

The Bills’ defense, No. 1 in the NFL against the pass last season, looked great in 7 on 7 work. Cam Newton was just 1 for 6 in a 7-on-7 drill. Mo Alexander had tight coverage on tight end Greg Olsen on the last throw.

The Panthers’ offense looked pretty good in 11-on-11 work. Newton, back from offseason shoulder surgery, looked fully healthy in hitting third-year speedster Curtis Samuel on a pretty, 50-yard bomb against Tre White. Both running back Christian McCaffrey and Olsen caught a bunch of passes and showed why they are tough matchups. McCaffrey caught 107 passes last year.

Said safety Micah Hyde of McCaffrey: "Whenever he gets the ball in his hands, whether it’s the run game or the pass game, it takes a lot of people to tackle him and a lot of people running to the ball."

In the two-minute drill, Newton hit five of five passes to drive the Panthers to a third-and-2 situation at the Bills’ 10. Cornerback Levi Wallace caught a deflected pass for an interception in the end zone. That snapped a string of 11 straight completions overall for Newton. The Panthers ran another play from the same spot, and Newton hit Olsen for a TD.

“It was good, we were all out there competing,” said Hyde. “The other team is doing some foreign stuff. We haven’t watched film on them. So you’re out there relying on your fundamentals. I feel like we went out and did well. We got some takeaways. And we’ve got a lot to work on.”

Chris Manhertz, the former Canisius College basketball player in his fourth year with the Panthers, capped the second-stringers’ two-minute drive with a 3-yard TD catch from QB Kyle Allen.

Center Mitch Morse now has been out for 17 days since suffering a concussion, an obvious source of concern given his past concussions. However, he looks like he’s getting closer to returning. While Morse remained in concussion protocol, he was wearing pads for the first time. Morse did not participate in individual drills but he did conditioning drills for a full 30 minutes after practice.

“Progressing at this point,” said coach Sean McDermott. “He’s in the protocol, but it is moving in a positive direction.”

With Morse still out, Jon Feliciano again took almost all of the starting snaps at center. The starting offensive line remained unchanged. Dion Dawkins and Quinton Spain were on the left side. Cody Ford was at right guard and Ty Nsekhe at right tackle. Spencer Long took one series with the starters at center.

There was some rotation on the second-team line. With center Russell Bodine (oblique) still out, Ike Boettger was the center. To his left often was Wyatt Teller and Garrett McGhin. To his right was Ryan Bates and De’Ondre Wesley.

“Jon did a good job snapping the ball and making his reads and his checks,” Allen said of Feliciano.

There were roughly 700 Bills fans in attendance, about half the total crowd at Wofford College, and there were far more Bills jerseys being worn than Panthers’ jerseys.

Bills fans were especially fired up early in the practice. They were singing the “Shout” song and even were cheering warmup throws by Josh Allen and Matt Barkley into a target net.

When you hear the Shout Song in South Carolina...#BillsMafia is out here in full force. 😍 pic.twitter.com/LLsyI973rn

“I wasn’t surprised,” said Panthers’ new receiver Chris Hogan, the former Bill. “Just playing across the league, in my time in Buffalo it doesn’t matter where you play, they’d always be there loud and proud. It’s great to bring some more people here to Spartanburg. It makes it more fun.”

“We’re worldwide,” McDermott said. “Buses were pulling out today from the hotel, and I saw a car with some Buffalo bumper stickers on it so it’s great to see.”

The temperature was 88 degrees. ... Former Bills tight ends Pete Metzelaars and Keith McKeller and former Bills cornerback Nate Clements were in attendance. ... Backup kicker Chase McLaughlin made seven of seven place-kicks from between 30 and 50 yards. Corey Bojorquez was the holder for McLaughlin. Stephen Hauschka did not kick. ... In the punting duel, both Bojorquez and Cory Carter got off a couple booming kicks but also each had one with a poor hang time. ... Tight end Jason Croom (hamstring) was participating in the early portion of practice but it didn’t look like he got any 11-on-11 snaps. Dawson Knox (hamstring) still is out.