The Central Library’s unremarkable side lawn was once best-known as a rest stop for neighborhood pets.

But after two years of planning, the Buffalo & Erie County Public Library on Tuesday unveiled a new public park in the underused space – with hopes that it will soon become a downtown destination.

The Reading Park, as its founders have dubbed it, includes new, pedestrian-friendly landscaping, clusters of red cafe chairs and tables, and a small stage for readings and performances. Future plans call for more seating, a designated dog area and a sculpture that honors the poet and Buffalo native Lucille Clifton.

Backers say the park, sponsored by Southwest Airlines and the Project for Public Spaces, will serve as a venue for new public programming by the library and partner organizations. They also hope it will enliven an underutilized downtown lot at a time when many of the neighborhood’s other unloved spaces are developing again.

During opening festivities on Tuesday, school-age kids galloped through clouds of bubbles on the lawn while adults queued at the food trucks and cracked books at cafe tables.

“We are the conduit between the Medical Campus, Canalside, City Hall, the Michigan Corridor and all these things that are happening,” said Mary Jean Jakubowski, the library director. “It’s really about making connections and creating community in these spaces.”

To that end, the portion of the Reading Park unveiled Tuesday – what landscape architect Joy Kuebler calls “the great lawn” – was designed to both look welcoming to passersby and to serve as a practical space for concerts, readings and other functions.

The grassy, triangular space is ringed with hillocks of mulch and planted with elms and ornamental grasses. Temporary yellow tents and a small stage across the sidewalk will host free public programming by the Western New York Book Arts Center, Just Buffalo Literary Center and a number of other community organizations. A schedule released at the park Tuesday included 10 free workshops and performances between Aug. 15 and Sept. 10.

“We’re so proud of the work we do within our walls,” said Laurie Dean Torrell, Just Buffalo's executive director, whose organization will hold a writing workshop in the park Aug. 29. “But to bring that work into the heart of the community and introduce it to people who wouldn’t have thought about going to something like a reading in the past – that’s very exciting.” 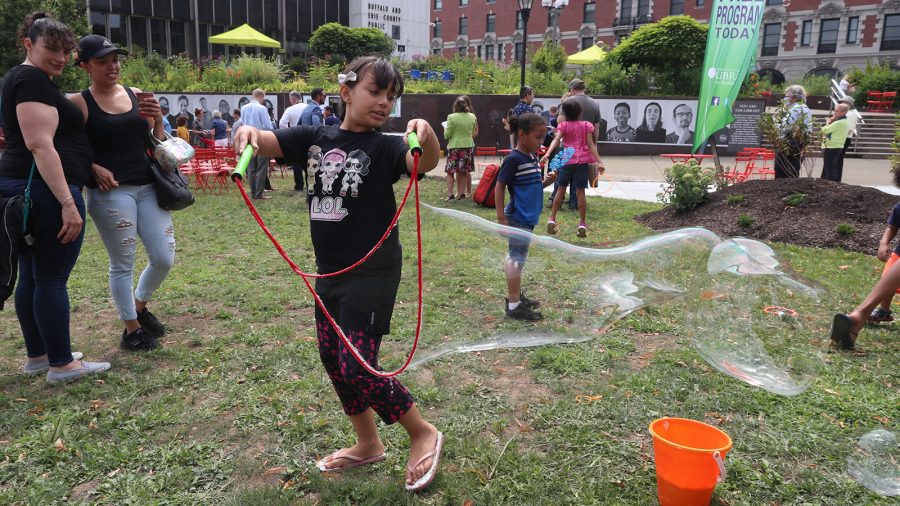 Future development will also add a “poetry garden” to the back half of the park, said Kuebler, with denser plantings, shade sails and “loungey furniture” for reading. There are also plans for a designated dog area with bags and trash cans – a nod to how downtown residents used the space previously.

While a $170,000 grant from Southwest Airlines funded the first phase of the Reading Park, the library is currently seeking grants and donations to cover the rest of the project, Jakubowski said. The library expects that process to take “a couple years,” and its plans will evolve with the community’s needs, she added.

That is welcome news to Gail Wells, who heads the Coppertown Block Club and lives in the nearby Michigan Avenue Corridor. The park has already improved walkability and liveability in its corner of downtown, said Wells, much as similar interventions brought more foot traffic to places like Canalside and Fountain Plaza.

“We’ve been waiting a long time for spaces like this,” Wells said. “It’s an excellent resource for everyone who lives and works downtown and in the surrounding neighborhoods. I’m very excited.”