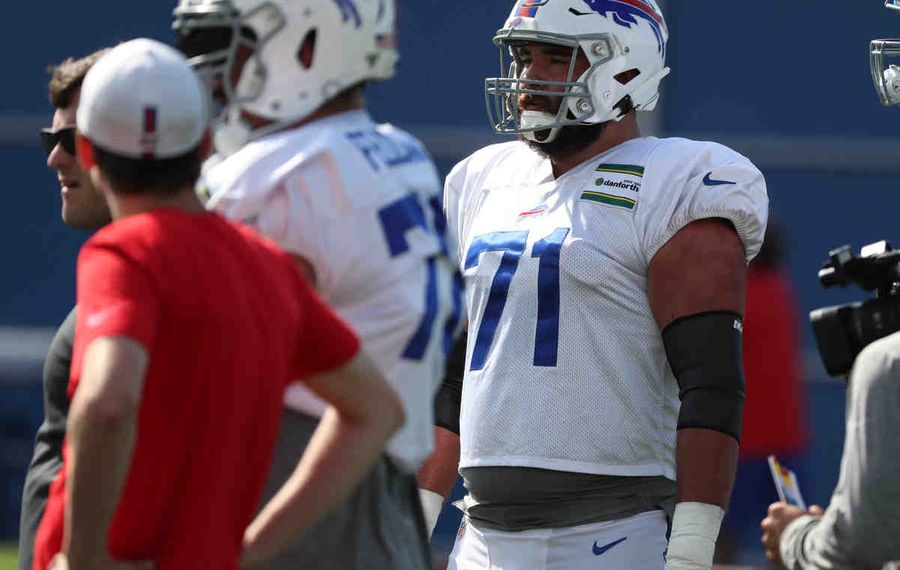 Ryan Bates has learned quickly that the NFL is in business.

One minute, the former Philadelphia Eagles’ rookie offensive lineman is getting ready to go for dinner and a movie with his girlfriend. The next, his phone rings and he’s a member of the Buffalo Bills.

Bates was traded to the Bills by the Eagles on Friday in exchange for defensive end Eli Harold. On Sunday, he practiced for the first time with the Bills.

“Everyone was telling me the NFL’s a business,” Bates said after practice. “I’m quickly learning that.”

Bates worked at left and right tackle with the third-team offense Sunday in his first practice. An undrafted free agent out of Penn State, he played in 37 career games with the Nittany Lions, including 12 starts in 2018 — nine at left tackle and three at right.

“They told me they want me to start out at tackle,” Bates said of the Bills’ coaching staff. “Hopefully I’m moved around a little bit more to guard and center. We’ll see. Time will tell.”

The Bills’ depth at offensive tackle has been challenged recently with LaAdrian Waddle going on injured reserve and Conor McDermott currently in the NFL’s concussion protocol. That led to the acquisition of Bates, a native of Warrington, Pa.

“We've been a little bit banged up at that position. The injuries kind of pile up at one or two positions and that's the case this year for the most part,” coach Sean McDermott said. “So he's a young player that we knew with the draft this last year. I know where he's from. I'm familiar with that area. Certainly a guy who can move a little bit. The rest, we'll get a better feel starting today.

“A lot of rushing and a lot of cramming, but I’m starting to pick it up really well,” Bates said. “I’m not too worried about it.”

A ninth-year veteran, Acho spent the last four seasons with the Chicago Bears. He originally entered the NFL as a fourth-round draft pick of the Arizona Cardinals in 2011, and has appeared in 102 career games, with 57 starts. He has 252 tackles, 17 sacks, three interceptions, 11 passes defensed, 10 forced fumbles and three fumble recoveries in his career.

Releasing Ducasse saves the Bills $2 million against the 2019 salary cap. He’ll count a little less than $100,000 against the cap in dead money.

In addition to McDermott, center Mitch Morse remains in the NFL’s concussion protocol and did not practice Sunday. They were joined on the sidelines by center Russell Bodine (oblique), tight end Dawson Knox (hamstring), linebacker Corey Thompson (groin), tight end Tyler Kroft (foot) and running back Senorise Perry (ankle). Tight end Jason Croom once again participated in a limited basis as he comes back from a hamstring injury.

The Bills will depart late Monday morning for their trip to the Carolinas, where they will participate in a pair of joint practices Tuesday and Wednesday with the Panthers. It will be a chance for McDermott and General Manager Brandon Beane to catch up with some old friends from their time in the organization.

It’s “a place that helped me in so many ways, with great people, great organization,” McDermott said. “Wofford's a neat campus, very similar to St. John Fisher in terms of the pride that they take and what they do down there. That said, we've got work to do and that's why we're going down there. I'm interested to watch, I'm excited to watch our team grow through this experience.”

The forecasted high for both practices is in the mid 90s, something that McDermott said his team is already preparing for.

“We've met as an organization, different departments, making sure we are on top of that,” he said. “It's not any surprise to us. The heat is real down there, so we want to make sure we're out in front of it.”

Bills fans in the Carolinas or those who may be traveling down from Western New York can take part in meet and greets scheduled from 8:30 to 11:30 a.m. Tuesday and Wednesday at the Richardson Indoor Arena at Wofford College, 429 N. Church St., Spartanburg, S.C. 29303. Former Bills players Nate Clements, Keith McKellar and Pete Metzelaars will sign autographs Tuesday, while Hall of Famer Joe DeLamielleure and Sam Gash will sign Wednesday. Practice begins each day at 9:25 a.m.

Additionally, a pregame party will be held at 4 p.m. Friday before the Bills play the Panthers at the Charlotte-area Bills Backers Bar, Tavern on the Tracks, 1411 S. Tryon St., Charlotte, N.C., 28203.