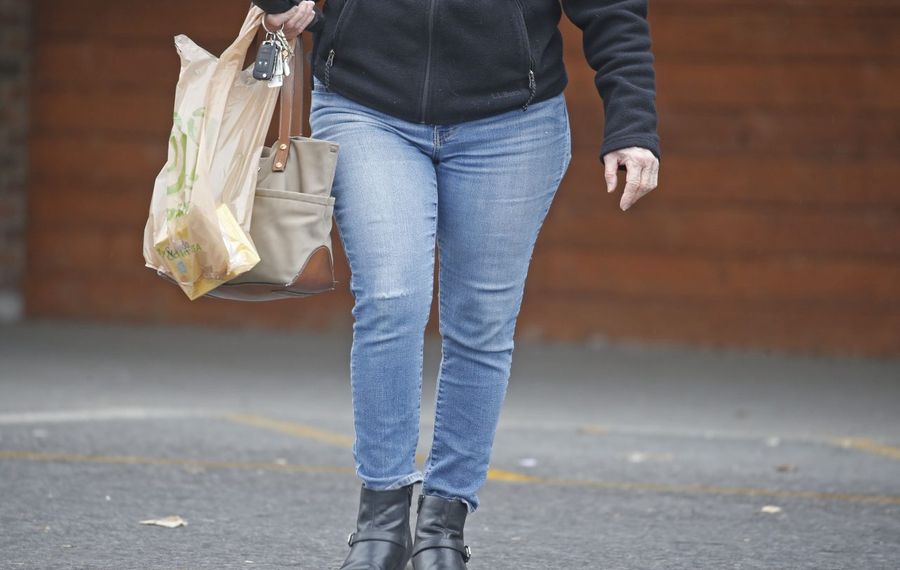 ALBANY – There is no question that single-use plastic bags will be banned at stores across New York March 1.

But what about those ubiquitous colorful, and often logo-emblazoned ones that are sold as reusable tote bags at so many store checkout stands?

If they have any touch of plastic in them, retailers say they will be prohibited from offering them to consumers.

What about reusable cloth tote bags?

If they have any plastic on them, such as their handles, those too will be banned, industry executives say.

State officials say the industry groups have a dose of misplaced worry, though at the same time government sources privately acknowledge a refinement to the bag ban law is being considered to make more specific precisely what is considered a legal, reusable bag.

With seven months left until New York’s statewide plastic bag ban kicks in, the definition of what makes a bag reusable is just one of many confusing issues.

“It’s going to be a challenge for retailers," Doug Galli, vice president and general manager of Crosby’s, the convenience store chain with dozens of locations across Western New York and the Finger Lakes, said of the law’s looming effective date.

It's rare to hear industry groups and environmentalists agree on something. But the sides align over the law’s vagueness.

Peter Iwanowicz, executive director of Environmental Advocates of New York, said the legislation is confusing because it clearly states that “any plastic” bag – including the thicker, reusable ones – are prohibited.

The culprit, Iwanowicz said, was the process by which Cuomo and legislative leaders secretly negotiated the deal and shoved it into the state budget bill without the ability for the industry or environmental groups to comment before it was unveiled.

Among those challenges, retailers say:

• What kinds of options will stores be able to offer consumers in the way of reusable products?

• Which communities will “opt in” to a provision in the new law permitting localities to charge 5 cents for each paper bag provided to consumers at checkout stands? And might some retailers, especially smaller ones, simply not offer any paper bags as an alternative to the banned plastic ones – requiring consumers to bring their own bags or hand-carry out what they purchase?

• Where do retailers, particularly those smaller outlets like convenience stores that have limited storage space, find the room to store paper bags, which are more expensive and take up more room than the current thin plastic bags?

One thing all agree on: Consumers can bring whatever they want into the store to lug out their purchases. Hoarding the to-be-banned plastic bags for some what-if moment? You can bring those bags, or any kind of reusable bag, into the store to carry out your items.

The question is: What can retailers directly offer those consumers who don’t have their own bags?

With more places enacting bans on plastic bags, which contribute to pollution on land and water, there was little doubt that New York would pass a ban during its 2019 legislative session.

The ban idea kicked around Albany for years, gaining more attention after voters in California in a 2016 referendum voted to impose a statewide plastic prohibition. This year, the first of several plastic bag bills hit legislators’ desk on Jan. 3. Cuomo re-proposed a week later his version of a plastic bag ban that he first floated in 2018.

In the end, the actual provisions were inserted into the final set of bills that made up the state’s budget. It got final approval on April 1, with 11 months provided before implementation.

Environmental groups for years have pushed for a plastic bag ban, noting that New York consumers each year use 23 billion plastic bags – posing a threat in both their current states and when broken down eventually into microplastics.

Grocery stores and other retailers say the law’s reach went too far and, thanks to vaguely written provisions, havoc has ensued as companies negotiate with bag suppliers about what will and won’t be legal in New York.

When the chairs of the Assembly and Senate environmental conservation committee proposed plastic bag bans, they did so with precise language regarding reusable bags.

The bill by State Sen. Todd Kaminsky and Assemblyman Steve Englebright, both Long Island Democrats, defined them as being made for multiple reuse with handles able to carry “twenty-two pounds over a distance of one hundred and seventy five feet for a minimum of one hundreds and twenty-five uses,” and made of either cloth or other machine washable fabric or “durable plastic that is at least 2.25 mils thick."

But in the April state budget bill, Cuomo and lawmakers defined a banned bag as “any plastic bag.” There are some exemptions: plastic bags, for instance, can be used for bulk items such as vegetables and fruit, or drug prescriptions, trash, storage, garment and delivering newspapers.

Restaurants can continue using the single-use bags, too, for takeout orders. That rubbed convenience stores the wrong way, saying they, too, sell takeout meals but the bag exemption won’t apply to them.

The new law also defines a reusable bag – but with far less detail than earlier drafts. It states that such bags can be made of cloth or other such machine-washable fabrics that have handles or are a “durable bag with handles that is specifically designed and manufactured for multiple reuse.’’

It’s left some retailers wondering how to comply with the law, and how consumers will react to stores that offer cloth bags that might not be as easy to clean as the thicker, plastic reusable bags currently on the market. The timing is acute because retailers say now is the time when annual budgets are done and negotiations are underway with bag suppliers for 2019.

“The most common reusable bag out there that retail food stores now offer would be banned under the new law," said Michael Durant, president of the New York Food Industry Alliance, an Albany-based trade group with 800 corporate members, including Wegmans and Tops Friendly Markets.

Add in the confusion over what localities are going to opt into the nickel per paper bag charge and the result is a food industry in New York with big question marks hanging over it, Durant said.

“The big deal is what are the alternatives. Are there cloth bags available? What’s the price point compared to reusable bags? What will be the consumer reaction to cloth bags that could have cross-contamination issues between meat and vegetables? How do you clean them? Their availability?” Durant said of just some of the lingering questions.

Convenience stores have their own set of issues. James Calvin, president of the New York Association of Convenience Stores, said some of his members already offer thicker, non-film types of plastic bags used for carrying milk, ice cream and other products. “They are not only reusable, but they are widely reused," he said of such bags.

But, unless the law better clarifies what is a reusable bag and what isn’t, Calvin is telling his members that such thicker bags will not be legal.

“Plastic in any form and in any thickness is outlawed by this bag law as it stands now," Calvin said.

State officials say the industry’s interpretation is a stretch. “Reusable bags made of non-film plastic or cloth are not prohibited. For reusable bags with handles, the law also does not prohibit bags based on the handle material," said a spokeswoman for the state’s Department of Environmental Conservation.

Despite that statement, the agency is quietly working on a couple of ways to address ambiguities in the law. First, sources say the department is considering issuing a regulation to clear up some industry confusion. Second, the agency told industry executives it plans sometime this summer to issue a question-and-answer guidance document on the new law.

Englebright, the Long Island lawmaker, said he believes any confusion will be cleared up with the issuance of implementation regulations by the state. But he noted that some complaints are coming from groups that oppose any kind of bag ban.

In Suffolk County where he lives, a local law charging a nickel per plastic bag – in place 20 months now – has had a dramatic impact on both plastic bag use and consumers focus. “A great plurality of our public believes this is in their own best interest," he said of the Suffolk law that will be preempted by the stricter state law banning plastic bags next March.

“This is not an exercise in the loss of free will. That was not our goal. The goal was to reduce plastic in the environment and enhance the possibility that our public would become part of this effort to protect the environment and make greater use of reusable bags," Englebright said.

A paper bag provision is posing its own set of complications. The law allows cities and counties to opt in to permit charging a nickel for each paper bag provided consumers. Retailers don’t get any of that money; instead, a portion goes to the state and a portion goes to the locality, which can use the proceeds to help purchase reusable bags for lower income residents.

In June, USA Today Network in New York surveyed all the counties in the state and found that nearly half already said they will not mandate the 5-cent charge on paper bags.

The paper bag issue has its own questions: What happens in those areas that don’t impose the paper bag surcharge? Can retailers impose their own surcharge on consumers and keep the proceeds?

But Calvin, from the convenience store group, said many retailers in areas without a mandated paper bag fee won’t impose their own surcharge for fear nearby competitors will undercut them by not charging.

The financials, multiplied by millions of store stops a year by New York consumers, are being crunched this summer. A state task force on the plastic bag issue created in 2018 by Cuomo found in one case that the thin, single-use plastic bags cost retailers between 1 and 1.5 cents apiece. Paper bags with a handle: between 7 to 10 cents. And the heavy reusable plastic bags: 50 to 70 cents.

Iwanowicz, the environmental group lobbyist, said the state could have avoided the confusion by enacting what advocates called the “gold standard” bag bill: a ban on plastic bag coupled with a mandatory, statewide fee on paper bags. Permitting localities to opt in or out of the paper bag standards means, he said, that the environmental goals of the law will not be attained.

Further, he acknowledged, the situation just “sows lots of confusion in the industry.’’

“I’d rather have it one way or the other,’’ Galli, the Crosby’s executive, said of the paper bag provision that could cause different rules based solely on city or county boundary lines. “And the fact that we don’t get to share any of that fee is absolutely ludicrous because all those costs have to be passed along to consumers," he said of the paper bag costs.

In the end, environmental and retail groups say there is a lesson in the experience with the fledgling bag law: Handle such policy matters on their own, and in public, and not roll it into the largely secretive and harried, chaotic weeks leading up to the state budget’s adoption each spring.