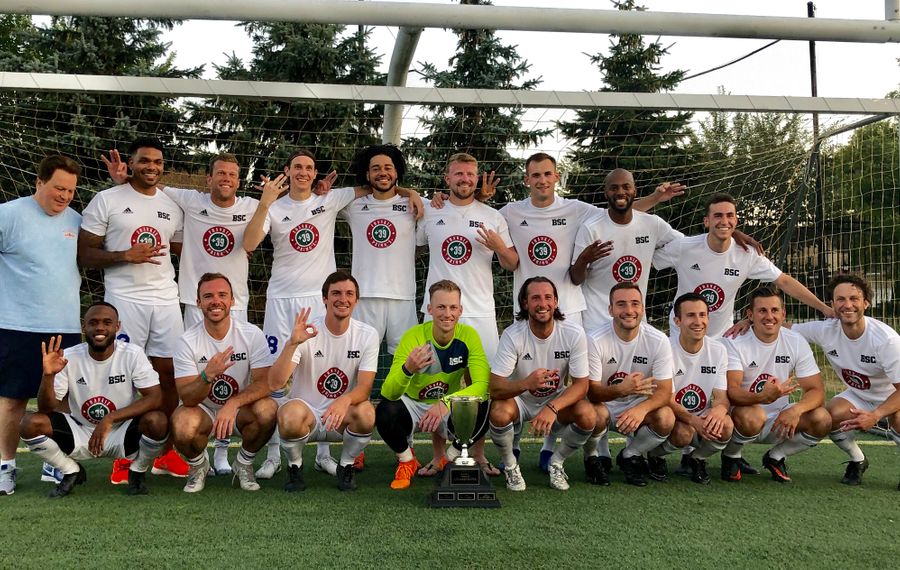 With the score knotted at 1 after two 10-minute overtime sessions, Raiders' goalkeeper Justin Figler stopped Sharpshooters' first shot, and all five of his teammates - Robert Williamson, Evan Walsh, Devonte Black, Chris Walter and Kyle Rogers, to seal it - converted for the 1-1 (5-4) final score.

Figler's save - a sprawling dive to his right to push away a low strike - set the tone for the penalties. Given the quality of the penalty kick takers from both teams, the former Daemen College goalkeeper kept things simple.

"It doesn't really matter what I do," Figler said. "You can't just read their hips because guys can go both ways. You just have to be confident that you have the ability to get there. It all happens so fast that you just make a decision and go."

It wasn't so much the poise from the spot and Figler's acrobatic stop that defined Raiders' win, but the guts to endure 75 minutes down a man after center back Casey Derkacz was sent off for denial of a goal-scoring opportunity when he dragged down Sharpshooters forward Ali Shawish as the last man back.

When Anthony Johnson, who headed in Raiders' only goal in regulation from the doorstep off a Rudy Pikuzinski III corner kick, and Ryan Walter went off with injuries and electric Colin O'Keefe not in attendance, BSC had to shuffle its personnel and trust its depth.

"I think we moved a lot of people around and did what we had to. It was really about the next person stepping up and just battling together and staying organized."

[Related: Look back at the 2019 premier division preview]

Considering most of Raiders' reserves are close to or beyond 30 years old - and premier has certainly trended younger in recent years - the onus was on Rob Williamson, Devonte Black and Evan Walsh - all fresh off their college careers - to cover ground, soak up minutes and work relentlessly to keep Amherst at bay. Kendell McFayden's first-half smash off the crossbar was Raiders' best scoring chance after Johnson's goal in the second minute

Williamson and Black, recently teammates at Buffalo State, helped BSC Inter earn promotion last season before joining current Bengal O'Keefe with Raiders. At the time, it was very much the rich getting richer, but there's an argument that BSC doesn't take the trifecta without their contributions.

"Rob and Devo have been awesome all year - and not to make us sound like a bunch of old guys - but Devo was always cruising around and Rob dominates the middle; adding them as been huge," Grabowski said. "You could see that the whole second half, both of them dominated."

With the victory, BSC Raiders will again represent the BDSL in a play-in game next spring against the Rochester & District Soccer League (should they choose to participate) for a spot in the USASA Amateur Cup.

Raiders represented Buffalo three of the last four seasons since the league was given Elite Amateur status, beating a Virginia team in 2018 before losing to FC Motown, then knocking off Rochester's Westside this year before falling to Maryland's Christos FC on the road.

Ali Shawish scored Sharpshooters' only goal on a header following a Drew Braun free kick. The Lackawanna High School alum nearly put his squad in front in the second overtime session, after Derek Bartlo send him off to the races on a counterattack. With Figler almost at the top of his 18-yard box, Shawish tried his luck from 40 yards on the run but fizzed his shot a few feet wide of the left post.

Bartlo, headed to Daemen College for his freshman season next week, delivered the most impressive individual moment of the extra sessions, sprinting alongside speedy Evan Walsh, who was careening in on a partial breakaway toward James Quinn's goal. The Canisius High School alum kept pace and timed his hooked slide tackle to perfection, winning the ball cleanly.

But in the end, it was Raiders' day once again. Their dynasty chugs onward, with seven titles since 2010, including five of the last six. The last time BSC played and lost a regular season or playoff game was July 16, 2017, a 3-0 decision to BUSS (Raiders forfeited a contest later that year to Clarence). It's been 33 matches since Raiders suffered defeat.

• Championship division: Orchard Park Alliance took the hardware in the championship division, knocking off Roos FC, 2-1. Bassam Harhara scored both goals - a penalty kick in the first half and insurance in the second - to earn man of the match honors. A committed defensive effort in front of goalkeeper Dwight Eagan preserved the lead for the victors, who knocked off top-seeded Beast City SC in penalty kicks last Sunday to earn promotion.

• First division: Olean 1854 FC exorcised its demons from last year's second division championship game to down Lykan United, 1-0, to conquer first division. Coty Winchell struck inside the first 10 minutes after a long ball played behind by Ryan Arvin bounced in front of Lykan's keeper and Winchell, the team's leading scorer, nodded home. Arvin and Steve DeGroff were solid in front of keeper Jarrett Lecceadone, who was credited with the clean sheet. 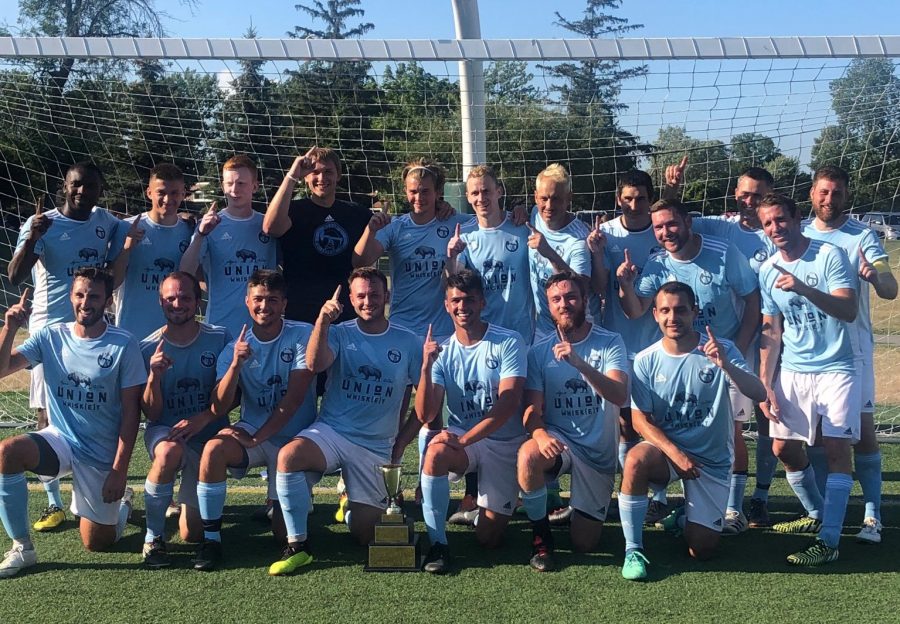 • Second division: Just minutes after Delco Academy went bar-down and out, NY Elite won a penalty kick that was finished calmly by Jovan Opacic for a 1-0 final. There was a decent pace and edge to the game, and chances both ways, but Elite's Eithan Hahn was up to the task when called upon, while Delco can feel hard done by the result.

• Third division: It was a magical finish to the season for Cheektowaga FC, which entered the playoffs with a 5-5-1 record and a -7 goals against. The resurgent side downed Moby Ducks FC, 2-1, behind goals from Jake Latello and Mason Cruz. Projected to finish last in the division, manager Robert Weigand - with help from a hungry core and a big goalkeeper addition in Deni Belesovski - accomplished the improbable.

*In the second division promotion match, Great White Buffalo defeated USAB FC, 2-1, to earn a place in first division for 2020.