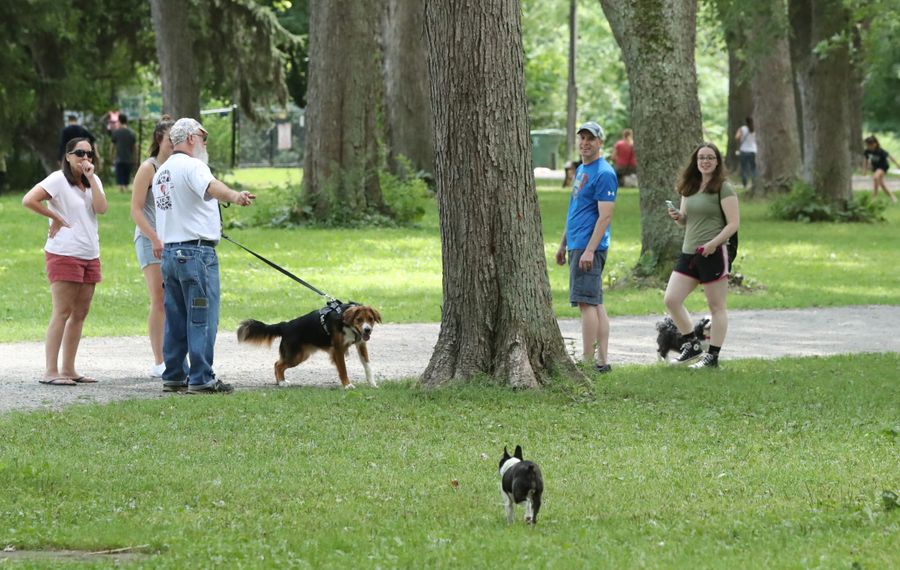 Chara the dog knows that when both her humans are home for the day it must be the weekend and that can only mean one thing: a trip to the dog park.

“She pesters us all day,” said Michelle Deems of West Seneca.

Chara, a 3-year-old mixed breed, prefers running free around the spacious grounds of Bark Park at Ellicott Island Park in the Town of Tonawanda.

But she and thousands of other dogs across Erie and Niagara counties are enjoying a choice these days with a growth in the number of dog parks, or off-leash recreation areas, as they say in canine circles.

At least eight have opened around the region since 2007, when the Barkyard at LaSalle Park opened.

The Paw Park in Amherst followed.

Now, there’s the Lewiston Dog Park at Artpark, a dog park in Hamburg, another in Wilson and the Knox Farm Dog Park in East Aurora.

Besides the Bark Park at Ellicott Island Park, Erie County has another at the Bark Park at Black Rock Canal Park. The county this summer announced plans for its third dog park, this one at Como Lake Park in Lancaster.

“I think it’s the way people recreate now,” said Mary McNeill, one of the volunteers who helped get the county to create a dog park on Ellicott Island.

“It’s sort of an amenity that people kind of expect in the communities they live,” McNeill said. “People have a dog and they want to be able to go somewhere and take their dogs with them.”

Ganesa Glose has another theory for the rising popularity of dog parks.

“The Millennial Generation,” said Glose, president of Friends of Ellicott Inc., the non-profit that supports Bark Park at Ellicott Island. “They’re getting dogs, instead of having kids.”

"I think another thing might be is people don't use their dogs any more for what they were bred for," Glose said. "You have these herding dogs, these hunting dogs and you can't leave them locked up in the back yard. They don't get the exercise they need."

Regardless of the reasons, many of the area’s dog parks started with grass-roots advocacy from dog-lovers, who wanted a place where their dogs could run free and socialize with other hounds.

Ellicott Island Park, located off Niagara Falls Boulevard, for years was sort of rundown and underused, but had been a spot where people brought their dogs to run unleashed, McNeill said. The county initially resisted their requests to turn it into a formal dog park.

That changed with a new county administration, she said. Under Erie County Executive Mark Poloncarz, the county agreed to designate it as a dog park in January 2014.

The not-for-profit still must pay roughly $2,000 a year for liability insurance, which is why it held a fundraiser at the park on Sunday.

"It was a good turnout," said Andrew Witt, who sits on the board of the non-profit. "We couldn't fit any more cars in the parking lot."

The 14 acres is surrounded by Ellicott Creek, creating a natural barrier for the dogs. Although the non-profit has never taken a count, Witt estimated several hundred dogs pass through this park on a weekend during the summer months.

A sign with 15 rules is posted by a gate where visitors enter after crossing a bridge onto the island.

Only two dogs per person. No puppies. No feeding dog treats to dogs other than your own.

Deems and her husband, Sam Varela, bring Chara on the weekends.

"I live in an apartment so I can't take her anywhere," Varela said. "It's just great to take her off the leash and let her go."

At the other end of the park, AJ, a 14 month-old German Shepherd, was playing with other dogs near the creek.

AJ likes to swim and fetch sticks from the water, said his owner, Andrew Berkowitz, 22, who graduated recently from the University at Buffalo.

But Berkowitz is moving back home to New York City, so AJ is going to miss his favorite park.

For Brian Sintau, the dog park is just as much a place for him to relax as it his for his dogs, Pepe and Skipper.

"More and more," he said, "dogs are like members of the family."

Jon Kelsey, a frequent visitor to the park a with his dog, Lazlo, couldn't agree more.

"Do we spoil them? Probably," said Kelsey, 60, of the Town of Tonawanda. “Do they deserve it? Absolutely.”