Since 1906, senior citizens have lived on a pastoral Williamsville property along Evans Street donated for their use by Buffalo businessman John Blocher.

The assisted-living facility gained new neighbors in recent years as contractors carved out a development of 19 luxury homes on land just behind Blocher Homes stretching toward the escarpment.

Now, a proposal to expand and repurpose the senior complex threatens to shatter the tranquil coexistence between Blocher Homes and owners of some of the most valuable homes in Amherst.

People Inc. plans to buy the Evans Street property and build a larger residence for mixed-income tenants and people living with disabilities.

Officials with the two organizations say housing for this population is badly needed in Williamsville, Blocher Homes can't afford to operate as it's now structured and they will do everything they can to address the concerns of neighbors and to find a new home for all 50 current tenants.

"Our Blocher residents have been and will always be the highest priority in this equation," Cheryl Wasson, a spokeswoman for Blocher and Beechwood Continuing Care, said in a letter to village officials. Blocher is an affiliate of Beechwood.

Critics of the $29 million project say People Inc. and Blocher Homes have not been transparent about their plans, the development is too large and disruptive for a property that borders a quiet subdivision and it hurts both the residents who have to move and the workers who could lose their jobs.

Last week's village Zoning Board of Appeals meeting drew a standing-room-only crowd and about 20 speakers who raised various objections to the plans.

“They could go any place on Main Street,” said Bill Hein, who lives with his wife, Diane, just to the east of Blocher Homes. “They’re trying to put this in a neighborhood, a residential neighborhood.” 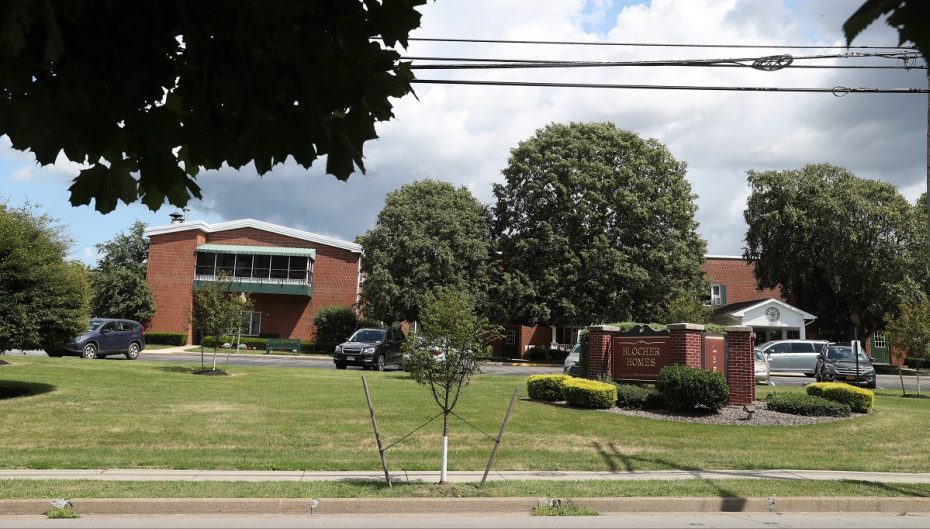 Fifty elderly residents of the assisted living facility, the Blocher Homes, will have to move if the People Inc. plan to purchase the property goes through. (James P. McCoy/Buffalo News)

While seniors have lived at the Blocher – pronounced "BLOKE-er" – property since the early 1900s, the current building opened in 1970. Seven years later, Blocher Homes became an affiliate of Beechwood Continuing Care.

Today, 50 of Blocher Homes' 57 beds are filled, according to the non-profit.

"Blocher Homes is a gem within our continuum yet it has faced census challenges, increased competition and a trend of a more frail population," Wasson wrote.

President and CEO Daniel O'Neill said the organization wanted to find a new use for Blocher Homes that respects its mission of service.

He said he approached Rhonda Frederick, his counterpart at People Inc., about six months ago. Their initial, broad conversations about Blocher's future led to the plans for People Inc. to take over the site.

People Inc. plans to construct 87 apartments in both the existing building, which is about 24,800 square feet, and an addition of 25,200 square feet just to the west of the current structure along Evans Street.

People Inc. would increase parking from 77 spaces to 131 spaces, but the organization says nearly 3 acres of the 5.3-acre property would remain green space.

Blocher Apartments would serve tenants who earn between 50% and 90% of the area's median income, with about a dozen units set aside for people with disabilities who can live independently.

Blocher is a non-profit institution and currently pays no property taxes. People Inc. typically reaches an agreement to make payments in lieu of taxes to the communities that host its mixed-income apartments, said Sean Hopkins, who is representing the two non-profits.

Blocher residents would have to move out after the sale to People Inc., and O'Neill said the organization wanted to provide them the best information as soon as it could without unnecessarily stressing them.

"We talked a lot about how best to do this," he said.

Once the project was added to the Aug. 5 Planning Board and Aug. 7 Zoning Board agendas, Blocher moved to notify residents and neighbors and held a community meeting on Aug. 1.

Many neighbors weren't happy to learn about the project and they say Blocher and People deliberately held back details from them.

Only a handful of residents on nearby Village Pointe Lane directly received a mailing about the project, Bill Hein said, leaving them to spread the word among their neighbors.

Hein said residents were left with more questions than answers following the meetings.

“It’s like pulling teeth to get information,” he said.

The main complaints center on the fact that plans would double the size of the existing building; bring more tenants possibly with children and pets; add parking that takes away green space on the site; add lights in the parking lot; lead to more noise and congestion; and add a curb cut allowing for entry and exit from the site onto Village Pointe Lane.

"This is not desirable and will reduce the quality of life in the village," Village Pointe Lane residents Paul Comeau and Victoria D'Angelo said in a statement read on their behalf at Wednesday's Zoning Board meeting.

Village Pointe Lane and Clarion Court are a subdivision of grand, spacious homes running off Essjay Road built over the past two decades.

When Amherst conducted a townwide reassessment of properties in 2017, the two homes with the highest assessed values were both on Village Pointe – topped by a $2.75 million, 7,730-square-foot custom-built mansion owned by the co-founder of Len-Co Lumber.

The property just to the north of Blocher Homes is for sale now with a list price of $1.85 million. The Heins' home was for sale last year for $1.9 million before it was taken off the market.

The problem is the flawed design for the project, said Beverly LoTempio, another Village Pointe Lane resident who spoke Wednesday. “It really has nothing to do with who lives there.”

Some Blocher Homes residents and employees also are distressed at the prospect of the home's closing.

Fifty residents between the ages of 75 and 104 live at Blocher now, with many living there for years.

Mildred Speers, who is 98, served as a decorated Army nurse during World War II. Craig Speers said his mother has lived at Blocher for about 18 months and appreciates the care she's received and the layout of the campus.

Speers said the news of the facility's planned closing was relayed in a "very vague" letter to Mildred Speers.

He said she and the other residents have received no concrete information about where they would go next, making them feel like Blocher doesn't care about its senior tenants.

"They have a moral obligation to the residents here," Speers said.

But Blocher officials say they've made it clear to residents they can move to Beechwood's campus on Millersport Highway, where Beechwood would convert existing space to serve seniors who need personal care.

O'Neill said it makes more sense to serve those seniors on the Beechwood Continuing Care campus where, if they have a medical issue, it could be addressed there instead of requiring a trip to the hospital.

Blocher Homes has 60 employees, including 18 who are members of 1199SEIU.

O'Neill said it's likely at least some employees can move to Beechwood if the project goes through, though some may need additional certifications.

"It's premature to talk about those plans now," he said.

Notably, while Blocher has union employees, Beechwood does not. Todd Hobler, an 1199SEIU vice president, said the union is keeping in close contact with ownership.

"It's our objective that our members at Blocher can gain employment at Beechwood," Hobler said.

The project requires a series of approvals before it can more forward, including at the village and state levels.

"I can assure you that we'll make a concerted effort to address the concerns that have been raised," said Hopkins, adding, "It's a process."

Can all sides reach a common ground?