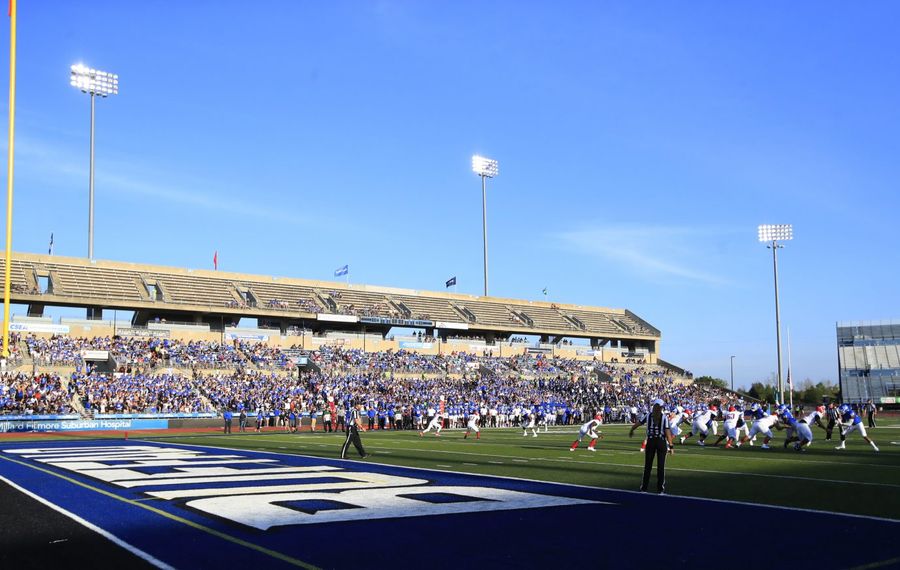 Outlined against a blue-gray October sky will be … a Budweiser sign?

The University at Buffalo plans to expand beer sales at football games this season, which begins with a home game Aug. 29 against Robert Morris. The Bulls also will hold a scrimmage Saturday night at 7.

It’s an experiment worth trying, so long as it does not spoil the atmosphere at UB Stadium.

The audience for college football games comprises more than college students and alumni. UB depends on hundreds of general sports fans who come to their Amherst field to watch Football Bowl Subdivision games. And the ticket prices are a bargain compared to pro football, which makes them affordable for families.

Anyone bringing children to UB Stadium does not want to experience the worst aspect of Buffalo Bills games: Drunken adults behaving badly.

The country song “Drinkin’ Town with a Football Problem” was not written about Buffalo, but on our worst days it resonates here.

The last thing we need is another gathering place for tailgaters who drink themselves into a stupor and then stumble into a game, leaving a trail of empty bottles and smashed card tables in their wake.

Beer was already for sale in some areas of UB Stadium, in the champions club and reserved alumni areas. Now there will be kiosks on the east and west concourses that will offer Budweiser and premium and craft beer options. Try-It Distributing and 12 Gates Brewery are the beer providers.

Underage college students have been known to find a way around the state drinking age of 21. They won’t be able to do so at Bulls games, according to Athletic Director Mark Alnutt.

“When it really came down to a decision, to do it, it had to be done right, in terms of how we serve, when we serve, the security aspect of it, checking IDs, trying to prevent underage drinking, and the responsible drinking aspect of that,” Alnutt told The News.

Alnutt is also aware of the need to preserve a family environment at the games.

“We’re not trying to mimic the Bills,” he said.

College football does not draw crowds that mimic the Bills’ attendance, either. UB last season averaged 18,380 spectators at its six home games. The stadium has a seating capacity of about 25,000. The Bulls went 5-1 at home, 10-4 overall, finishing the season with losses in the Mid-American Conference championship game and in the Dollar General Bowl.

Selling beer, like the push to bring sports betting to New York State, is another amenity that the Bulls can offer fans to tempt them into leaving the comforts of home.

“We’re competing against that 70-inch, flat-screen TV with a recliner, with a cup holder, and there’s some people that want to partake,” Alnutt said.

If the atmosphere at Bulls games becomes more fan-friendly without detracting from family fun, the beer experiment will be a success.