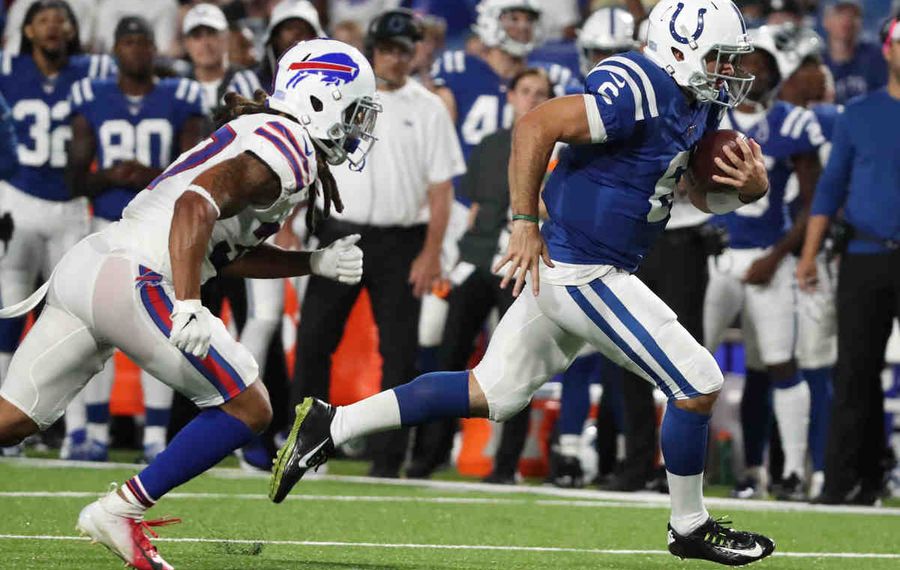 Hall of Fame quarterback Jim Kelly has never stood up and cheered when a Buffalo Bills opponent scored against his team.

That changed Thursday night at New Era Field, and with good reason.

“Blood is thicker than anything,” the Bills legend said before watching his nephew, Chad, make his preseason debut with the Indianapolis Colts. “When Chad is in the game, I’m pulling for Chad.

Chad Kelly, the St. Joe’s graduate and 2011 Buffalo News Player of the Year, gave his nearly 100 family and friends in the stands plenty of reasons to cheer during a preseason opener that served as a de facto homecoming game for Kelly and likely helped his quest to again earn a roster spot in the NFL.

Kelly guided Indianapolis to scores on each of the team’s final three possessions during the Bills’ 24-16 triumph. Kelly, who played four series total, rushed four times for a team-high 53 yards, including a 33-yard touchdown on a naked bootleg. He also completed 13-of-19 passes for 121 yards – including a couple of tough throws while under pressure.

The highlight was the touchdown run with 9 minutes, 45 seconds left as he faked a handoff on a play going to the right and then took off the other way. He easily outran the three closest defenders to the end zone.

“I probably shouldn’t have pulled it down, but I did, tried to improvise,” Kelly said. “Good things happen when you see something from before. It was a great job by the offensive line getting a great push and a wide receiver coming inside to crack for us."

New Era Field is the venue in which Kelly led St. Joe's to a Monsignor Martin championship and was named MVP of the title game in 2010.

“It’s awesome to finally come back home and get back on the field," he said. "It’s like a kid in a candy shop.”

That play, along with handful of others that helped the Colts’ offense move the ball, punctuated the 25-year-old Kelly’s first game in the league since being released last October by the Denver Broncos.

Denver cut Kelly after he was arrested and charged with trespassing for entering a woman’s home following a Halloween party thrown by teammate Von Miller. He returned to Buffalo and lived in is parents' basement, taking the time to "clear my brain, to kind of re-focus."

Kelly pleaded guilty and was sentenced to one-year supervised probation and 50 hours of community service.

That transgression, one of a few well-documented missteps by the Ole Miss product over the years, is the reason Kelly went from having some job security in the NFL to once again having to prove that he not only has the skill set to succeed but also the necessary maturity off the field.

Kelly is the No. 4 quarterback in Colts camp but came in as the No. 3 on Thursday because starter Andrew Luck is sitting out with a calf injury.

While Jacoby Brissett is locked in as Luck’s backup, Kelly might have gained ground on third-string QB Phillip Walker during Thursday’s audition before Colts head coach and family friend Frank Reich. Walker, who was on and off the Colts’ practice squad last year, went 8 for 18 with an interception and 85 yards.

Indy kept just two quarterbacks on last year’s 53-man roster but might be inclined to start with three given Luck's injury history. Regardless of how that plays out, Thursday qualifies as a step in the right direction for Kelly in his bid to resurrect his career.

“I was happy for Chad, coming home to Buffalo,” said Reich, who later exited the Colts' locker room with Jim Kelly. “It was nice that he played well and did some good things that second half. Chad has practiced very well. He and Phillip have both practiced well.

“It was good for Chad to come back after everything he’s been through. He’s been A-plus in every way in the locker room so I was glad he had such a good night.”

When informed of Reich’s A-plus grade, Kelly said he still has more work to do but added that the Colts have helped him out by surrounding him with great teammates and coaches.

“It’s still going to take time,” Kelly said. “It’s only been a couple months. I have to keep on improving every day. Every time I step on the field, off the field, whatever, I have to think it’s bigger, it’s bigger than me. It’s bigger than anything I can imagine. It’s having higher expectations for myself more so now than ever.”

What a night it was. So so proud of my nephew Chad He played very well and I’m excited to see what’s next for him, stay toned. Frank Reich is the man. Love you Chill factor 14. Great job tonight bud. Great seeing you. Love ya. 👍🙏🏈❤️

Kelly’s family said he has made strides in becoming more mature. It comes down to showing he can make the smart decisions off the field as he can on it.

“I think the biggest thing is he knows he made a mistake (last October),” Kelly’s father, Kevin, said. “We’ve talked. He’s truly got his head together. … He just wants to prove he belongs in the NFL.”

“This is the best I’ve ever seen him mentally,” Jim Kelly said. “It’s time for him to grow up. He’s not a kid anymore.

“I think if he does well at camp, there’s no doubt he’ll get a chance.”

If he makes the Colts' roster, he will need to serve a two-game suspension for violating the league's personal conduct policy, stemming from his guilty.

Kelly came into the game with 7:18 left in the third quarter. He completed all four pass attempts on that drive, which stalled due to a holding penalty resulting in a punt.

Kelly guided the Colts to points his next time on the field, a 44-yard field goal with 12:41 left. Then came the highlight that likely caught the attention of other teams in the league too, the decision to run a bootleg.

“He’s been practicing that all week,” receiver Deon Cain said. “He made a smart play and gave us some points to give us life. I definitely appreciate my boy ‘Six’ (Kelly).”

A potential touchdown pass turned into a 19-yard gain late in the fourth quarter when reserve tight end Hale Hentges lost his footing trying to tightrope the sideline.

But all in all, the game serves as something for Kelly to build on.

“I think at the end of the day I have to keep working hard," Kelly said. "I have to have fun and everything else will take care of itself.”