Jim Kubiak has been analyzing the play of the Buffalo Bills quarterbacks for BNBlitz.com. Kubiak is the all-time leading passer at Navy, has played in the NFL, NFL Europe and the Arena Football League, and has been a coach and executive in the AFL. He spent eight years as the radio analyst for the University at Buffalo and runs the Western New York Quarterback Academy to help develop the next generation of quarterbacks.

In 2018, Buffalo Bills quarterback Josh Allen finished with a completion percentage of just 52.8%, 10 passing touchdowns to 12 interceptions, as well as too many unplanned quarterback rushing yards (631 yards), less than ideal for a franchise quarterback. The Bills also had 32 turnovers as an offensive unit, second most in the NFL. These statistics were focus areas earmarked for dramatic improvement heading into 2019.

The Bills organization believes that Allen will improve his efficiency, his TD to INT ratio, and his overall decision making skills with the right teachers around him and with experience. General Manager Brandon Beane and coach Sean McDermott believe Allen has the DNA and character on this team to make the ascent to the top of the NFL mountain.

Whether McDermott and the Bills will rise to these challenges remains to be seen, but it was clear in Thursday night's preseason opener against the Indianapolis Colts that Allen is miles ahead of where he was this time last season.

That begs the question, how much can he grow, and what will his growth mean to the Bills?

Allen was very poised and in command in his limited action against the Colts in front of a home crowd, leading the Bills during the first two drives of the game. He completed 6 of 11 passes for 66 yards in 16 offensive plays, and rushed for 8 yards while scrambling for a first down.

He looked comfortable in the pocket, reading and deciphering coverage and making throws accurately and on time. Allen’s performance grade in his 16 plays was near perfect at 95%, accounting for just one missed throw that occurred while attempting a curl route to his right on third-and-6 of the first drive.

Cole Beasley’s impact was felt immediately. The Bills emphasis on “bottom-up” option route concepts is already evident in his limited preseason debut. This a concept of teaching quarterbacks to read their progressions short-to-deep.

Having a “slot specialist" and playmaker with Beasley's skill set will make an enormous difference in the Bills' offense as they will be able to adjust formations and personnel to get favorable defensive matchups for Beasley to win.

An excellent example of this came on the fourth play from scrimmage. On second-and-19, Beasley ran an “option” route from a trips left formation that Allen anticipated and completed versus zone coverage. Beasley read the coverage and sat his option route down in the hole in the defense.

This play resulted in a third-and-6, and Allen picked up the first down with a scramble to his left. The Bills eventually punted on this drive due to Allen’s only miss of the game, an underthrow of Zay Jones on a curl route to the right.

Beasley’s value was clear to see early on. On the Bills' second offensive play, Allen found Beasley underneath for a 7-yard pickup, but the play was called back because of a holding penalty.

Another sign of offensive progress and development came on the 13th play from scrimmage, on second-and-10, as Allen kept his eyes down the field and on the defense. In doing so he was able to make a skillful read and throw to Zay Jones on a corner route to his left.  Allen saw cornerback Quincy Wilson, out of position and attacked his voided area. This was an masterful read and reaction by Allen, and combined with his throwaway on the Bills' second offensive play, provide proof of maturation for the second-year quarterback. 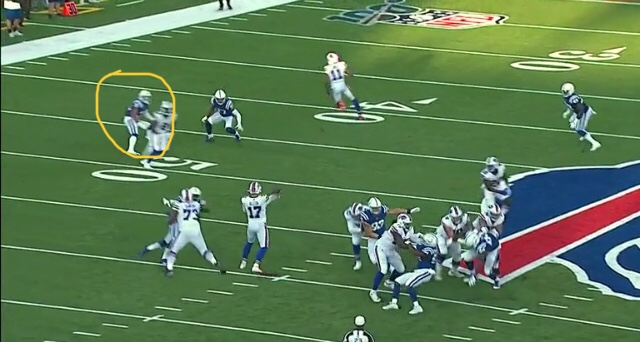 Backup quarterback Matt Barkley was equally impressive, completing 9 of 14 passes for 126 yards and one touchdown. Barkley's performance stood out from the standpoint that he had several unfortunate things happen on the field, including a snap over his head, a sack off of play action, and an offsides penalty that was created by a mistimed snap.

In each instance, Barkley weathered the adversity that was out of his control, and was able to get the offense back on course without severe damage. Barkley accrued 24 pluses on 26 offensive plays in the grade system. He consistently made solid decisions working through his progressions and threw the only touchdown pass of the game.

The Bills did give up three sacks, all of which occurred off play-action plays. Taking these sacks and protecting the football were the right decisions in each instance, reducing further risk and  minimizing the risk of turning the ball over.

Tyree Jackson played the entire second half, completing 2 of 10 passes for just 45 yards. The 6-foot-7-inch University at Buffalo product was unsteady and visibly behind several read and throws, which was to be expected in his professional debut.

The Bills' collective quarterback grades for the win over the Colts was an 83%. The first half, however, played by Allen and Barkley, graded to an impressive 93%.

It is here that we can see the positive impact quarterbacks coach Ken Dorsey is having. There was an increased sense of anticipation, awareness and poise overall from both players.

Allen was quoted during the taping of "Embedded" saying, “Sometimes the best play is just getting out of a bad play.” This is a Ken Dorsey philosophy making an impact in the beliefs of his quarterbacks, and he is right. The best play in the NFL can oftentimes be the throwaway or sack, which in and of themselves are not positive plays. But these negative outcomes are certainly preferred to game-losing turnovers.

It was only one half of preseason football, but there was enough quarterback execution to see that progress has been made in the offseason in teaching Allen more of the discipline necessary for success.