Titan and the Wild Boars: The True Cave Rescue of the Thai Soccer Team by Susan Hood and Pathana Sornhiran, illustrated by Dow Phumiruk; Harper ($17.99) 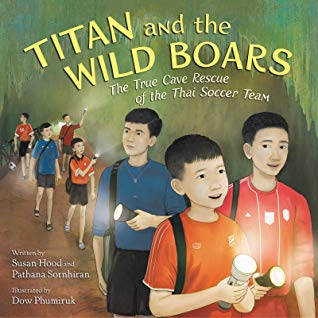 Award-winning nonfiction author Susan Hood brings her lyrical gifts to the first-hand account by reporter Pathana Sornhiran of the amazing rescue by an international dive team of 12 boys of the Wild Boars youth soccer team and their coach, after more than two weeks stuck in flooded caves.

The authors do a wonderful job sketching out the camaraderie among the teammates and their young coach and the last-minute impulse to visit the caves after soccer practice. Titan, of the title, at 11 was one of the youngest members of the team (and was in the final group to be rescued). He began his soccer career playing in a friend's old shoes held together with duct tape. To train, he would ride his bike for miles on rugged mountain roads in the steamy heat.

The authors offer a vivid look at the dangers of the flooded caves and the long ordeal, as the boys sat on a rocky ledge in the dark, their coach urging them to drink the clean water dripping down the stalactites, teaching them to meditate to conserve energy. The authors describe the dangers for the divers attempting the rescue:

"Divers scaled boulders the size of a house and slid down rock cliffs. The current was so strong it could knock divers' masks from their faces. Silt stirred up in the water made flashlights nearly useless."

Included are notes the boys wrote to their families on waterproof paper brought by the divers, and letters the parents wrote back.

The wonderfully detailed illustrations, created using pencil, charcoal and ink sketches and Photoshop, include fascinating images of the flooded caves and remarkable portraits of the boys, are by Thailand-born Dow Phumiruk, a pediatrician who also writes and illustrates children's books.

At the end, there is more about the cave rescue, fascinating facts about the boys and their rescuers, a timeline and an interview with two of the British divers who guided the sedated boys through the underwater tunnels in the caves. On the inside cover is a map of the route through the caves. The book is dedicated to Thai Navy Seal Saman Kunan, who died during the rescue when his breathing mouthpiece came off and he couldn't find it in the dark. 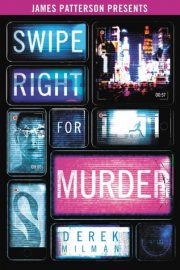 Milman expertly uses the conventions of the classic thriller (weapons of choice include arrows, even a paper clip) but finds new ways to terrify an audience in a digital age of hacking, drones, cellphones and other electronic mischief. At the same time he offers a heart-wrenching coming-of-age tale of 17-year-old Aidan, whose tragic backstory includes the death of his beloved older brother, a disastrous sexual relationship with a much older neighbor and his father's negative reaction to his coming out.

As the novel begins, Aidan is staying overnight in a posh Manhattan hotel as he waits to join his family on a trip when he decides to hook up with a stranger. The man ends up dead and mysterious unknown parties threaten Aidan, believing he is someone named Preston and demanding a stolen flash drive. Aidan finds himself on the run, trying to avoid being killed by his mysterious pursuers and to avoid being arrested by the police for murder. Complicating matters is a crush Aidan develops on Shiloh, a  handsome stranger he meets on a train, if only he could figure out whose side Shiloh is really on.  Milman spins a nifty digital age explanation for this case of mistaken identity and invents a new motivation for home-grown terrorism spawned by the current political backdrop. The cinema-ready settings for the nonstop action include a tourist center in the Adirondacks and an amusement park.

Aidan makes for a smart, funny narrator: "So I enjoyed that last chunk of senior year. That prolonged twilight, dotted with fireflies of random memories and the last wisps of minor friendships, where you watch the waning days of your childhood burn out until you're ejected into the next phase."