Over his years at E.B. Green’s Steakhouse, piano man Jackie Jocko became known for his humor, banter and upbeat melodies. But even he had his more introspective moments.

At such times you might hear him singing this bittersweet ballad by Cole Porter.

The beloved entertainer and Buffalo native, who retired in fall 2016 and moved to an assisted living facility, died Thursday at Brothers of Mercy in Clarence. He was 90.

His health had been declining for some time. In March 2016, Mr. Jocko suffered the loss of 92-year-old Joe Peters, the drummer he had worked with for 70 years and described as his partner in music and in life. Mr. Jocko kept up a good front after the loss and even initially increased his work week at E.B. Green’s, where he had played for almost 20 years. The restaurant is now Morton’s Steakhouse.

“That’s the past. We’re doing new things now,” he declared.

Mr. Jocko rarely got sick and needed only a few hours of sleep a night, often in an armchair. He took no time off. Music, to him, was therapy. He showed that the day after Peters’ death.

“He’s doing what he loves to do,” said Brandy Perry, the general manager of E.B. Green’s, on that occasion. “It’s his family here.”

But he appeared to weaken as the months went on and performed for the last time in October of that year.

Mr. Jocko knew thousands of songs and could play complex classics by ear, too; two of his favorites were Tchaikovsky’s “Pathetique” Symphony and Wagner’s “Tristan and Isolde.”

His clear, extroverted vocals had also helped him win recording contracts. He played Birdland, the venerable New York City jazz club, and would demonstrate at Buffalo’s Italian Festival that he could play fine conventional jazz piano.

Yet the void he has left cannot be described in strictly musical terms.

Mr. Jocko knew countless people well. He introduced them to each other, and played at their weddings, funerals and house parties. He called them on the phone, charted their horoscopes and gave them advice. Thousands of people felt they knew him, because they did.

As a result, Mr. Jocko was the center of a vast community. People got to know each other because of him. Out-of-towners who met him in the hotel lounge came back to town because of him, and kept coming back. He brought together people from Buffalo and beyond, of all walks of life, from the restaurant’s cooks and parking valets to celebrities, judges, politicians and professors.

At E.B. Green’s,  Mr. Jocko treated the crowd to one nonstop set a night. He played and sang standards, greeted arrivals and departures, and riffed on classical music.

Regulars were assigned their own songs, which Mr. Jocko would play as they entered the lounge. One person had “Rhapsody in Blue,” and another, the theme from Wagner’s “Tristan and Isolde,” impeccably harmonized. The lounge became a gathering place for a large cadre of fans, many of whom were regulars for years.

They included restaurateur Russ Salvatore; retired State Supreme Court Judge Salvatore Martoche; singer Ann English, the mother of "Murphy Brown" creator Diane English; and Walter Kunz, former dean of undergraduates at the University at Buffalo. Visiting musicians stopped in when they were in town. Dave Matthews was seen in the lounge, as was Bruce Springsteen.

“Jackie Jocko is an entertainer in the old sense of the word,” Buffalo Evening News Critic Dale Anderson wrote when Mr. Jocko came back to Buffalo in 1972 after 15 years around the world. “The sort of guy who can sit down at a piano any place and captivate anyone within hearing distance.”

Born John Giaccio in Buffalo’s North Fillmore neighborhood, Mr. Jocko began pounding the piano in taverns along Hertel Avenue before his 13th birthday. By the 1940s, he was playing with a 10-piece orchestra at venues including the Statler Hotel and Kleinhans Music Hall.

He and Peters met in 1948 at the Everglades on Hertel. In 1950, they began performing together. Their first gig was at Carl’s Lounge, on Jefferson Avenue near Genesee Street. In 1952, they played for six weeks at Birdland.

The early 1950s found Mr. Jocko at the Town Casino, where bobby-soxers were crazy about him. The name “Jocko” came from his classmates at East High School, who pronounced his name that way. 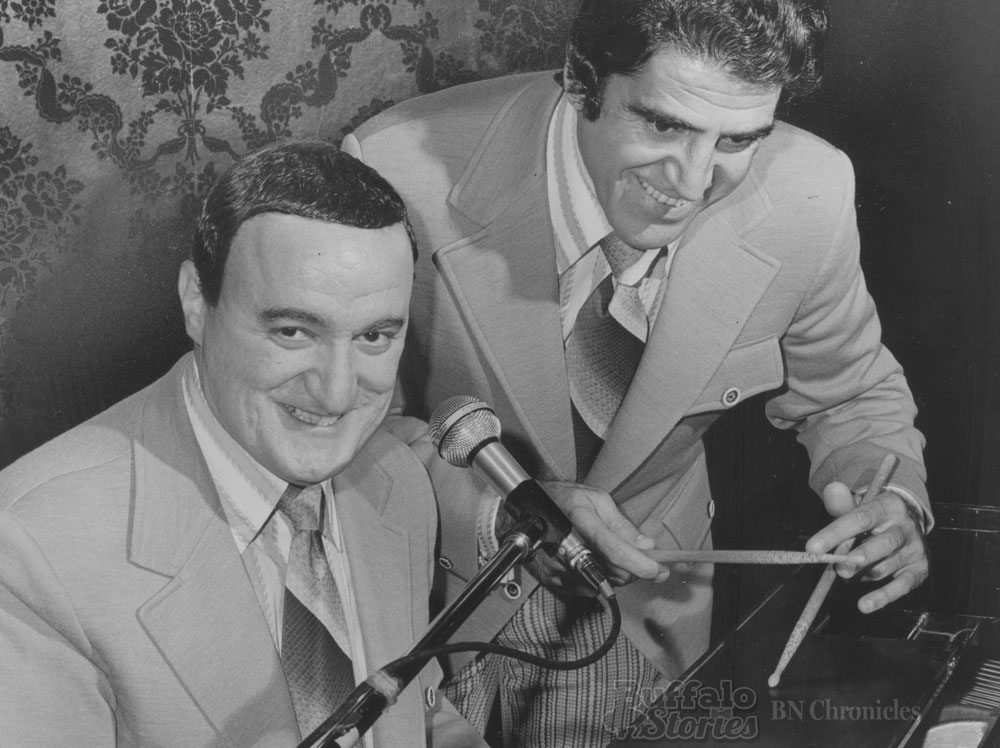 A Mercury recording contract put him into the big time. In 1952, Mr. Jocko, accompanied by orchestra, made a Mercury 78-rpm single, “Lover, Come Back To Me.”

“Jocko has a bright, individual style and is a warbler to watch,” enthused Billboard magazine.

Kids on his street recalled that he drove a Mercury, perhaps in honor of his contract. He was the first on the block with a TV, and he would invite them over to watch “Kukla, Fran and Ollie.”

In March 1961, on the Las Vegas Strip, he launched his Strand Records album “Jackie Jocko – Mr. Excitement – From Coast to Coast.” His 1962 album “Like Wow!,” also on the Strand label, showed a smiling Mr. Jocko and Peters. It featured such standards as “Misty,” “This Masquerade” and “Caravan.”

Mr. Jocko and Peters put together a show and took it on the road. For five years, they played the Sahara in Las Vegas. Two years followed at Harrah’s in Reno, and for two years after that, they toured Hawaii.

In “the world’s great lounges,” to use his lingo, Mr. Jocko rubbed elbows with the stars. Marlene Dietrich, he recalled, would pause in the doorway, listening to him, reluctant to leave. “Jocko, I’m dead,” he recalled her yawning in her German accent. Elvis Presley would walk past the lounge and greet him. “He’d wave,” Mr. Jocko said. “He had a warmth about him.”

“When the president got shot, the FBI came to see me in Buffalo. They asked: ‘What was Jack Ruby like? What did he give you?’ I said: ‘How should I know? He used to want to hear 'Misty.' "

Mr. Jocko leaned back euphorically. “They didn’t know what I was by the time I was done with them.”

Returning home in 1972, Mr. Jocko amassed a huge following at the Cloister, a bastion of elegance on Delaware Avenue. Women dressed to the nines would descend the staircase as he played “You Stepped Out of a Dream.”

He also played such noted local spots as the Everglades on Hertel, Foster’s Supper Club, John’s Flaming Hearth and St. George’s Table, in the basement of the Westbrook Hotel.

He invested for a while in Jocko’s Supper Club, a restaurant on Broadway. He went from there to Fanny’s, the bygone restaurant on Sheridan Drive in Amherst.

E.B. Green’s was his next, and last, musical home. 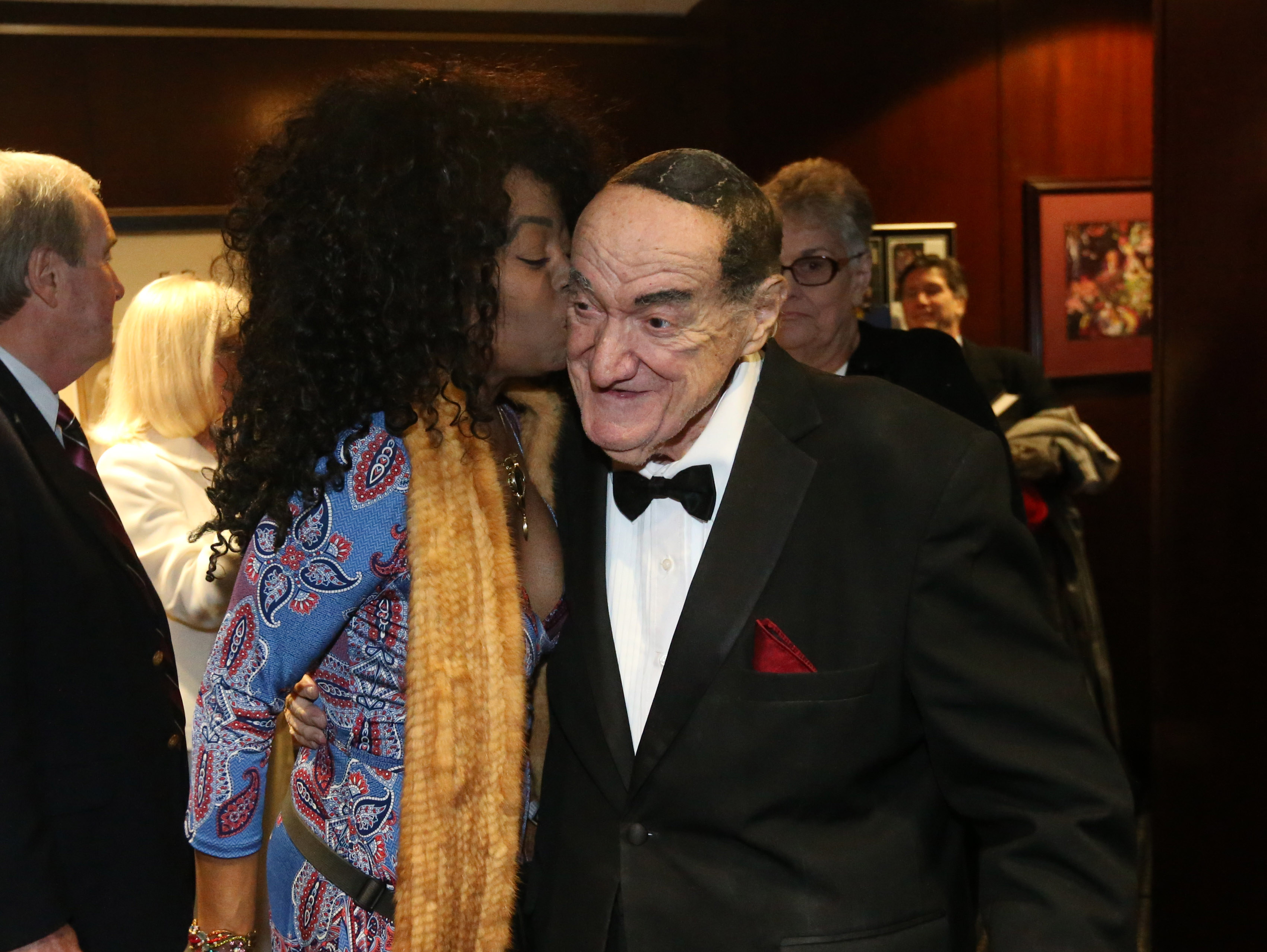 Many came out March 9, 2017, for Jackie Jocko's farewell affair at E.B. Green's restaurant, where he played piano and sang for many years. Greeting him as he arrived was friend and Buffalo singer Joyce Wilson Nixon, who knew him for many years. (Sharon Cantillon/Buffalo News)

“Everybody likes Jackie. He just relates to people and makes them feel like family,” Peters told The News in 1994. “Jackie plays the piano, but he really plays the crowd. He needs people to make his music work.”

Retirement party for Jackie Jocko an affair to remember
Lounge wizard: Jackie Jocko is Buffalo's magic man at the piano
Jackie Jocko plays on, despite loss of his drummer partner
Smiles at Tribute to Jackie Jocko in Hyatt Regency

Inducted into the Buffalo Music Hall of Fame in 1997, Mr. Jocko was known for his high spirits. Between songs, he would banter hilariously. “I feel as if I’m in a Lebanese market! All this action! Where are you from, sir? San Diego? I left my heart in San Diego ... ”

His close associate Peters was a devout Catholic, and Mr. Jocko, too, had a spiritual side.

“One, is God is your source. Two, go out and do something and give of what you have. Three, expect a miracle. Just don’t hope for a miracle – expect one every day,” was one characteristic remark, quoted in The News in 1972.

As his health faded, his fans and friends hoped for a miracle. A team of people was organized under the leadership of close friend Dave Granville, called "Driving Jackie Jocko." The volunteers who drove him included Karen Colville, wife of The News’ publisher Warren Colville, as well as priests, judges and public servants.

Eventually that effort spiraled into Slumber Party With Jackie Jocko. Friends were invited to stay overnight with him in his Eggertsville home, enjoying movies and conversation.

Even in retirement, Mr. Jocko stayed himself in some ways. He played Bingo and agitated for higher stakes. He went out to dinner at restaurants he loved. He even went to a casino occasionally.

But he never played the piano again, preferring to leave it behind when he left the stage behind.

Mr. Jocko returned to E.B. Green's in March 2017 for a retirement party in his honor. He spent the evening greeting a legion of fans and admirers, among them some of the most well-known names and faces in Buffalo.

“He’s so talented. It has endured for generations,” former Mayor Anthony Masiello said that night, growing emotional as he spoke. “The amazing thing about Jocko is his endurance. It’s a legacy we should all admire.”