The 15th annual Northern Chautauqua Conservation Club Walleye Tournament, better known as the Con Club tourney, was held on Lake Erie Aug. 2-4. The three-day contest treats each day as a separate event, recognizing the big fish each day, as well as the biggest box for the best three fish for the day. In the end, 110 teams battled it out for cash prizes.

On Friday, Rob Oram and his EyeCon team swept the action with the big fish, a 10.59-pound Sturgeon Point walleye, and the best three walleye that weighed in at 23.15 pounds. Day 2 was led by Robert Spoon of Mayville and his Spoon Team, which weighed in a 10.64-pound fish, followed closely by Capt. Jim Steel of Alexander with Dream Catcher and a 10.37-pound walleye. Steel won the biggest box for the day, three fish totaling 26.28 pounds.

On Day 3, Larry Lazarczyk of Silver Creek won big fish with a 9.94-pound walleye, followed closely by Oram with a 9.32-pound fish. Big box for the day was Oram with a three-fish total of 22.93 pounds, less than a pound better than Steel, which checked in at 21.97 pounds. For the three days, Steel’s squad led the charge with a total catch of 68.84 pounds, followed by Oram at 60.24 pounds. Spoon’s big fish, a 10.64-pound lunker, held up as the biggest overall, followed by Oram at 10.59 pounds and Steel at 10.37 pounds. For a rundown of winners, check the tournament’s Facebook page. 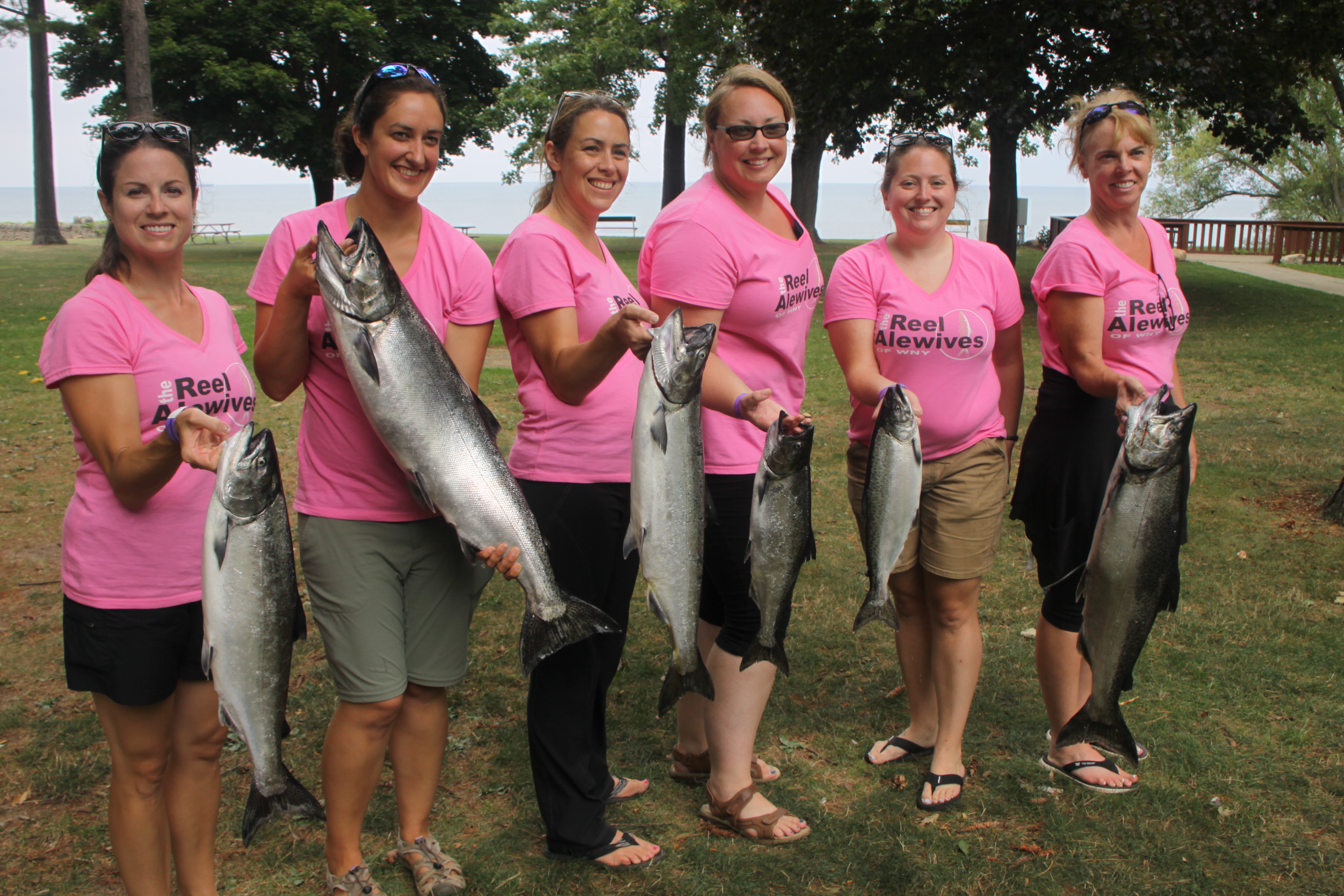 The 4th annual Reelin' for a Cure is set for August 16. This was one of the teams last year with their catch. (Bill Hilts Jr. photo)

Reelin’ for a Cure scheduled for Aug. 16

The 4th annual ladies-only Reelin’ for a Cure will be held out of the ports of Wilson and Olcott on Aug. 16. Female teams will be fishing from boats in Lake Ontario, pursuing salmon and trout from 6 a.m. to noon. A weigh-in will take place at Krull Park in Olcott starting at 1 p.m., followed by lunch in the park. Not only are they competing for some modest prize money, they are raising funds for a cancer-related cause or group. This year, the benefactor is “Hope for Two,” the Pregnant with Cancer Network.

Cost for a ladies team to enter is $250. Find a boat captain yourself (it can be a male and he doesn’t actually have to be a captain) or sign up and one could be assigned if one is available. Individuals also can sign up and you may be placed on a team. Check the details at www.reelinforacure.com or call Stephanie Pierleoni at 481-6388.

Clays for Heroes set for Aug. 17

The 8th annual Clays for Heroes Sporting Clays contest is slated for Aug. 17 at Rochester Brooks International Trap and Skeet Club located at 962 Honeoye Falls #6 Road, Rush. Clay busters can choose between 100 NSCA Registered targets or a 100 bird fun shoot. The squaded event will have rotations at 8:30 a.m. and 11:30 a.m. The contest will run from 8 a.m. to 4 p.m.

There are no losers in this friendly competition because all proceeds will go to the Honored American Veterans Afield, as it has previously. Cost for adults is $65, juniors under 21 years of age are $45. There is a $20 Lewis Class option. Register at www.winscoreonline.com. For more information contact Ashley Butcher at 698-5892 or claysforheroes@gmail.com.

Next weekend, three fishing derbies will run simultaneously on Lake Ontario. The huge Fall Lake Ontario Counties Trout and Salmon Derby will begin on Aug. 16 and run through Sept. 2. Grand prize for the biggest salmon is $25,000. There also are categories for rainbow/steelhead and brown trout. Derby passes are available for $40 or one-day passes can be purchased for $20. For more information, weigh stations and registration outlets, visit www.loc.org. You must be signed up by 7 a.m. to fish the same day.

On Aug. 17, the Greater Niagara Fish Odyssey Derby, held in Erie, Niagara and Orleans counties, will begin. There are seven categories for the Adult Division, as well as for the Junior Division. Kids 15 and under can fish for free. Adult passes are $20 for the full derby or $10 for a day. For more information, visit www.fishodyssey.net.

The third derby is the Orleans County Rotary Derby, which is currently underway. It will continue through Aug. 18.