It is a marketing plan without precedent for Lake Ontario.

It started with a month of free fishing days that will conclude on Labor Day. Yes, there is a full month of free fishing action available during one of the best (and busiest) months of the year in this Great Lake, under normal circumstances. With record-high lake levels, though, many people may not have realized that the lake is open for business. As a result, many of the small towns, villages and hamlets have businesses that have been reeling.

In addition to Lake Ontario, Gov. Andrew Cuomo announced at a news conference in Oswego that free fishing is available on the lower Niagara River and the St. Lawrence River. However, it does not include the harbors or tributaries off the lake. Also, reduced admission – half-price for the gate costs and half-price for campsites (if any are available) – is being offered for 30 state parks along the lake and rivers in the focus area.

There is a 30-second commercial highlighting Lake Ontario, the fishing and some area attractions making the rounds.

Of course, when the announcement was made, many businesses didn’t know what to expect. License-issuing agents such as the Boat Doctors in Olcott and Narby’s in Point Breeze were thinking the worst – no one would come into their shops to buy a license. Licenses are often viewed as a hook to pull people into a store with the hope that they would buy additional items like food, drinks, fishing tackle and more.

“August is our busiest month of the year,” said Sharon Narburgh, owner of Narby’s. “Why wouldn’t they do something like this in September when the traffic is traditionally slower?”

Better yet, why not make the people come into the local shop to obtain a free license. That way you would be able to capture the person’s information and create a database. It’s easy to come up with ideas after the fact. 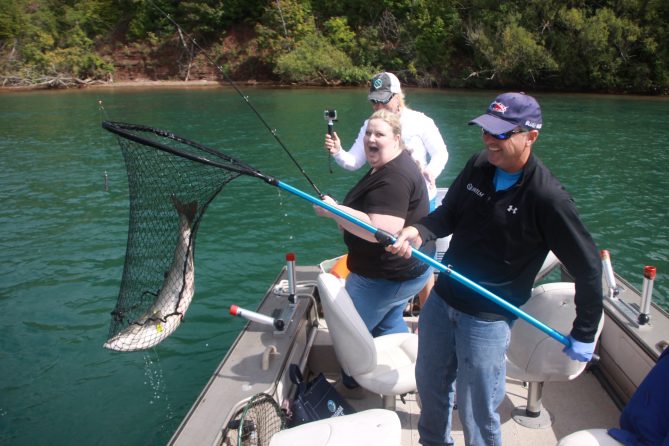 That wasn’t the only concern when the announcement was made last week. Dale Dunkelberger, Region 9 representative for the state’s Conservation Fund Advisory Board, was concerned about the revenue that would be lost to the Conservation Fund.

“No one talked to us about the potential impact something like this could cause,” he said. “License dollars help fund the fisheries programs directly and every license sold brings in additional funds through federal excise taxes.”

Will the state reimburse the Conservation Fund for lost revenue?

“New York already has the greatest ‘value’ for a license,” said Dave Chilson, president of the Lake Ontario Counties derbies that take place every spring, summer and fall. "For what we offer, the price is not stopping anyone from coming here. The stores selling licenses are out the commissions generated by a license sale plus any additional revenue generated by the license sales traffic. And they have to hang the signs that tell them no license is required through Labor Day.”

Of course, Chilson will do everything he can to take advantage of the situation. His fall LOC Derby coincides perfectly with the announcement, running from Aug. 16 to Sept. 2, Labor Day. Not having to pay for a license could make the difference whether or not someone will sign up for the fall derby and take a chance on catching the $25,000 grand prize salmon.

There’s also a perception that Lake Ontario is being shown favoritism as well. Lake Erie has record-high water levels, too, but there’s no special marketing effort or free fishing promotion to help the cause. However, there has not been the flooding, damage and destruction that Lake Ontario has experienced. 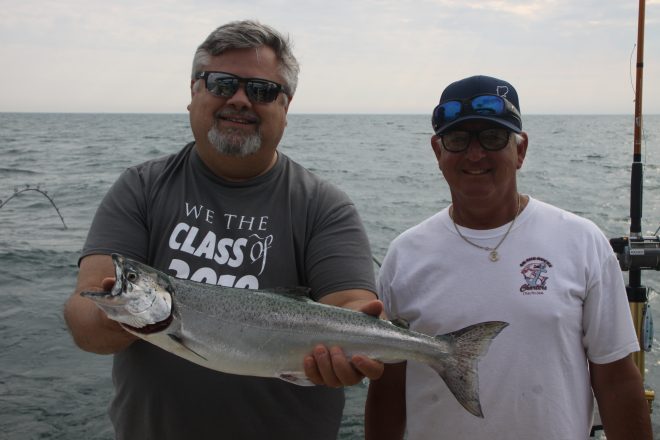 Tom Calvert of Virginia shows off a small salmon he caught with Capt. Mike Johannes of On The Rocks Charters this summer. (Bill Hilts Jr.)

When Cuomo announced the Lake Ontario Resiliency and Economic Development Initiative in June, one of the biggest messages that resulted from stakeholders was that they needed help now. They needed the word to get out that the marinas, the charters, the launch ramps, the restaurants and the other shops in the towns and villages on Lake Ontario were open for business. This was a response to that plea and it had to be before Labor Day.

If last weekend was an indication of the promotion's impact, you won’t get any complaints from the Boat Doctors in Olcott.

“It was an incredible weekend business-wise,” said Karen Evarts, who owns the Boat Doctors with her husband, Jim.

Initially, they weren’t keen on the idea of free fishing and not needing a license.

“With more time available in the shop to sell, and a noticeable increase in the traffic flow after the announcement, we were extremely busy, something they have not seen in a while,” she said.

When you look at the big picture, free fishing on Lake Ontario will bring people in from out of town. They may camp for half-price or launch their boat for half-price, but they are still here enjoying the resource and making an economic impact for the lakeshore communities that desperately need it.

It’s also a great opportunity to take family and friends to the lake and see what fishing (and Lake Ontario) is all about. This is an opportunity to “hook” someone new and bring more people into the fishing ranks. Every fisherman should think about it from that standpoint, to try and lure more anglers into the fishing fraternity.

Lake Ontario is now on the radar of the I Love NY folks, too. DEC is becoming more proactive in marketing our state. Those are all good things that we would love to see continue.