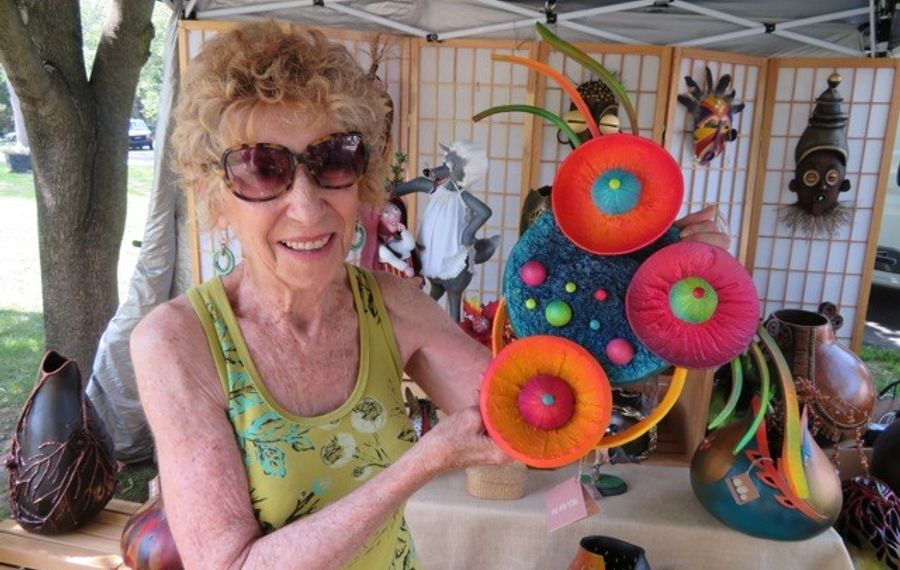 This year's Lewiston Art Festival (Aug. 10 and 11) welcomes dozens of professional artists and crafts people along with hosting a section dedicated to art by college and high school students. On Aug. 10, young artists will mark the 50th anniversary of the Woodstock music festival by drawing murals on the street with the theme "Peace, Love and Chalk."

The Lewiston Public Library is sponsoring a free hands-on art activity between Frontier House and the BBC, and local bands will perform throughout the days. Festival hours are 10 a.m. to 6 p.m. Aug. 10 and 10 a.m. to 5 p.m. Aug. 11, with Center Street closed to cars between Fourth and Eighth streets. On Aug. 9, a concert at the village gazebo at Fourth and Center will kick off the celebration.

The free Music in the Woods series continues at Artpark in Lewiston with performances beginning at 4 p.m. Aug. 11 in the park's Lower Park Emerald Grove, which has views of the Niagara River. On Aug. 11, guitarist Johannes Linstead leads his group in a rousing concert of Afro-Cuban music.

The series concludes Aug. 18 with the saxophone sounds of Klang Par2, playing new and classic works. Wildy Zumwalt and Diane Hunger, both of Buffalo, formed the duo in 2009 and have performed around the country and in Europe. Free parking is available on the Artpark grounds for both performances.

This is your last chance to see a first-rate cast in "First Date," MusicalFare's bright, fast-moving summer comedy featuring an unlikely matchup between a sharp woman with a history of bad choices and a nice guy rebounding from a bad breakup. You don't have to be in the dating scene to appreciate the show's hilarious approach to people trying to make a good first impression. Performances continue Aug. 8 through 11, including afternoon shows Aug. 10 and 11. Tickets are $45 at MusicalFare.com. The theater is on the Daemen College campus, 4380 Main St., Amherst.

The Reinstein Woods Nature Preserve is opening its trails from 3 to 7 p.m. Aug. 10 to craft artisans and other vendors for an Artisan Market and Barbecue to raise money to support its educational and stewardship programs. No matter what the weather is, visitors will be able to walk through the 292-acre preserve and shop in the market for jewelry, pottery and other handcrafted items.

While there, guests will hear more than bird calls: members of the Buffalo Ukulele Club will perform live during the evening. There also will be $15 dinners available from BW's Smokin' Barrels BBQ. Admission to the preserve and market is free; meal tickets can be bought in advance at reinsteinwoods.org. The preserve entrance is at 93 Honorine Drive, Depew (off Como Park Boulevard).

Legendary broadcast journalist Bill Moyers will be in residence at Chautauqua Institution from Aug. 12 through 16, presenting a lecture at 2 p.m. Aug. 12 in the Hall of Philosophy and leading discussions with other thought leaders at the same time and place the following four days. Topic for the week is shifting global power, with the 2 p.m. series focusing on "The Power of 'Soft' Power."

Moyers has won 36 Emmy Awards for his investigative work, plus numerous other prizes and awards for his acclaimed reporting on issues of faith, politics and the public's well-being. A gate pass is required; afternoon admission (noon to 8 p.m.) is $15, plus parking ($10). For more information about the week's speakers, go to chq.org.