Imagine a whole new look for Ellicott Street – one that's enticing and inviting from the Buffalo Niagara Medical Campus to Sahlen Field.

New landscaping and benches. New sidewalks and lighting. New developments and a sense of place.

And all of it helping to make for an enjoyable walk from the northern end of the business district, past downtown Buffalo, through Fireman's Park and Cathedral Park, and then along Erie Street all the way to the lakefront.

That's the image that city officials want to create, through a series of streetscape and infrastructure projects designed to link three bustling centers of activity – the Medical Campus, the business and government zone and Canalside.

The goal is to encourage more walkability, housing and business in downtown Buffalo, while bringing more people to spend time in the city's core.

"We think Ellicott Street has a ton of potential," said Brandye Merriweather, vice president for downtown development at the Buffalo Urban Development Corp. "You’ve got a lot of pieces there for a great urban neighborhood, and that’s what we’re trying to bring out."

A key focus is on how to make downtown Buffalo inviting for the kind of younger technology workers that M&T Bank is bringing to Seneca One, and the kind of economy that the city wants to create, said Dan Leonard, project development manager for Wendel Cos. That's why the connection to the Medical Campus, with all of its research, is so important.

"This is thinking about the entire ecosystem of downtown as a place where we can live, work and play," Leonard said. "It's not just about creating a streetscape and making it look nicer, but how are we as a city positioning ourselves to build that kind of economy and attract that kind of worker. It's a piece of a larger puzzle." 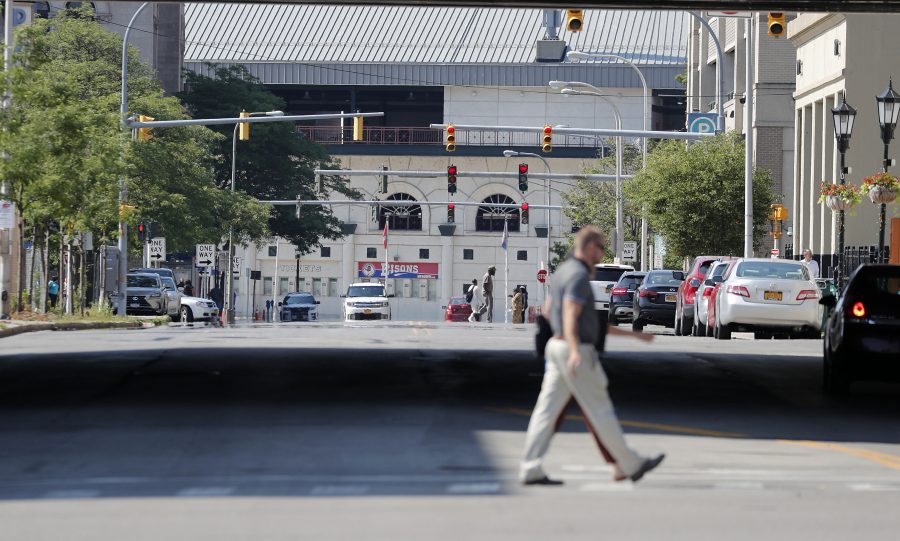 Pedestrians cross the street at Ellicott and Broadway in Buffalo on Monday, Aug. 5, 2019. (Mark Mulville/Buffalo News)

It's not an entirely new idea. The rethinking of the city's downtown streets is part of the recommendations outlined in the city's Downtown Infrastructure and Public Realm Master Plan, as well as a Downtown Housing Demand Study that BUDC conducted together with the Buffalo Niagara Partnership last year. Those reports urged the city to tackle the proposals piece by piece, in concentrated areas, to have a better impact.

The city, working with BUDC and Buffalo Place, is implementing a first phase to recreate a greenway from Church Street to the Erie Basin Marina. It's also planning to start construction next summer on a second phase to enhance the Entertainment District on Chippewa, Franklin Street and even part of Court Street.

Now officials are kicking off a third phase, using Ellicott Street as a critical north-south link. What's being called the "Ellicott Street Node" is actually a corridor from Tupper to Swan streets, traveling through a neighborhood that is already seeing redevelopment, new restaurants and breweries and an increase in visitors.

"You’ve got scattered development all over downtown, but not enough in one place to create critical mass," said David Stebbins, executive vice president at BUDC. "We think Ellicott Street may have the best opportunity to accomplish that first in downtown."

At the north end, Uniland Development Co. is finishing a new medical office building, along with starting construction on a new post office and preparing to begin work on a planned co-working facility. Further south, the landscape is now dotted with the likes of Tappo, Toutant, Marble & Rye, Big Ditch Brewing Co. and Deep South Taco, drawing crowds from the city and suburbs.

The Buffalo & Erie County Public Library is finishing its new reading park on the grounds. Ciminelli Real Estate Corp. has been greenlighted for its planned new 201-unit affordable housing and urban grocery market project at 201 Ellicott St., on a 2.5-acre parking lot just south of the library.

Even with all that new activity, however, there are still plenty of infill opportunities and neglected buildings that are ripe for transformation. Stebbins noted that M&T Bank Corp. owns two parking lots that could be redeveloped, while a New Jersey investor owns several properties around Maureen's Buffalo Wholesale Flower Market at 441 Ellicott. Simon Electric Co.'s Bert Simon owns several properties as well.

"It’s a huge development opportunity," Stebbins said. "It could be so much more. Maybe we want to highlight that to encourage the development of those properties."

Officials are hoping to create a friendlier design for the street itself, so people will feel comfortable making the trek.

"We’ll have a bunch of residents moving in there. How do we make the street more walkable?" Merriweather asked. "How do we build on the reading park that’s coming?"

This past week, after soliciting proposals from three local firms, BUDC hired Wendel to lead the initial effort to develop a concept plan for Ellicott, at an initial cost of $24,750. Wendel will also work with Mustard Seed Consulting and Rebel One Studios.

The work is expected to start within two weeks, with an estimated time frame of six weeks to complete the plan, and then rolling it out in the fall. Officials will then use the results – as they did with the earlier master plan – to seek public funding in support of the more extensive and expensive project.

"It’s one area where you’re going to get a lot of bang for your buck with respect to the key nodes you’ll be able to connect," Merriweather said. "We’re looking to do this all in a way that makes sense and in a way that each project complements the others. We’re looking to take chunk by chunk, piece by piece, and we’ll likely be looking at other areas as well."

The two previous stages are already in progress. Stebbins said it used to be possible to stand at what was Shelton Square – at Main and Church streets – and look down Erie Street to the waterfront. That street now meanders instead of extending in a straight line, and is cut off where pocket parks now stand. But the right-of-way still exists, and the goal of the first project is to use that and the green spaces to reconnect the pathway with a clear and smooth pedestrian link.

"We’re never going to be able to put Erie Street back the way it was historically, but we can make it a better visual pedestrian connection," Stebbins said.

Meanwhile, the Entertainment District project will cover Chippewa from Main to Elmwood Avenue, Franklin from Chippewa to Court, and Court from Niagara Square to Main. The project is now in design, and work will range from streetscape and landscaping to public art displays.

"We're just looking for low-cost, high-impact ways to start to carry people down through the entertainment district," Merriweather said. "That is ongoing. We’re still on track to start construction on that project next year. That is exciting. It’s been a long time coming."