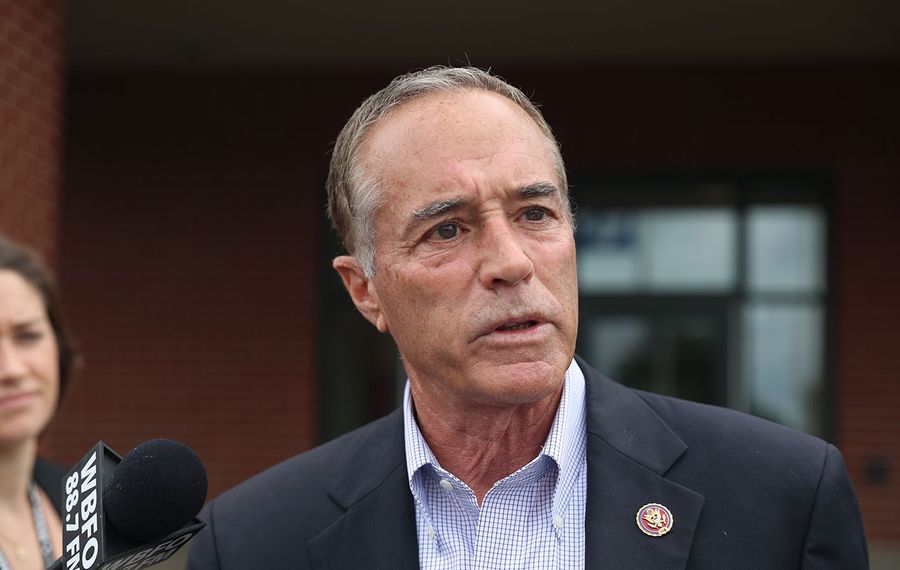 NEW YORK – Federal prosecutors Tuesday narrowed the criminal charges against Rep. Chris Collins in a new indictment that aims to sidestep a potential legal obstacle that could slow the case to a crawl.

The essence of the case against Collins remains the same.

"The government has made these modifications in the original indictment in an effort to avoid unnecessary pretrial litigation that could delay the resolution of the matter," said the U.S. Attorney for the Southern District of New York Geoffrey S. Berman in a letter to the judge in the case.

The new indictment, like the original, charges all three men with conspiracy, wire fraud and lying to the FBI. But the new indictment "narrows the scope of the conspiracy," Berman wrote, in that it reduces the number of unindicted co-conspirators in the case from six to two.

The four individuals who are no longer seen as co-conspirators "are alleged to be downstream tippees but not members of the charged conspiracy," Berman wrote.

Prosecutors charge that, as a board member for an Australian biotech called Innate Immunotherapeutics, the congressman in June 2017 received an email with devastating information about the company's only product.

That product, an experimental treatment for secondary progressive multiple sclerosis, failed in clinical trials, meaning it was essentially worthless.

Prosecutors allege that within minutes of when Collins heard that bad news, he started calling his son.

Chris Collins could not dump his shares because his Innate shares were held in Australia and subject to a trading halt at the time.

But Cameron Collins' shares were held in the U.S., where trading on Innate stock continued – and prosecutors say he started dumping them the day after his father called. By doing so, prosecutors said, Cameron Collins saved himself from $570,900 in losses he would have suffered if he had held onto that stock.

It's unclear exactly what the new indictment, handed down by a grand jury Tuesday, will mean in terms of timing for the Collins case.

The trial in the case is currently set for next Feb. 3.

Berman made clear in his letter to the judge, though, that he was concerned about delays in the case stemming from Collins' argument regarding the Constitution's obscure speech or debate clause.

Collins maintains he is innocent, and his lawyers have argued that federal investigators violated his rights as a congressman by accessing legislative information that the speech or debate clause is intended to protect.

"Although the government continues to vigorously dispute Congressman Collins' claim that the original indictment was tainted by violations of the Speech or Debate Clause, the grand jury presentation that resulted in the (new) indictment did not include those facts over which Collins has asserted a claim of privilege," Berman wrote.

Prosecutors removed two passages of the original indictment that Collins argued had violated his speech or debate clause privilege, which aims to protect legislative actions from improper interference from the executive branch or the courts.

The new indictment removes a reference to an earlier Office of Congressional Ethics investigation into Collins' involvement with Innate. That investigation found "substantial reason to believe" that Collins had violated federal law by touting Innate's stock to colleagues and friends in 2016 based on inside information.

That insider-trading allegation is entirely separate from the case federal prosecutors brought against Collins. Collins' lawyers argued the Office of Congressional Ethics investigation should not be mentioned in the indictment because the office itself is part of Congress and therefore subject to speech or debate clause protection.

Prosecutors also removed a section of the indictment that involved correspondence between Collins and his press secretary in the days after Innate's stock collapsed in June 2017. That now-omitted section included a press secretary statement in response to Buffalo News questions about an apparent unusual trading pattern in Innate stock. In addition, prosecutors removed a section of the original indictment that included Collins' reaction to the Buffalo News' questions: "We want this to go away."

The Collins legal team argued that interactions between Collins and his press secretary were legislative in nature and thus subject to protection under the speech or debate clause.

Prosecutors told the federal judge they were concerned that leaving those speech or debate questions open at this point in the case could lead to serious delays.

That's because the defense team not only could file motions aimed at blocking that evidence – but could also appeal also the judge's eventual ruling on those motions all the way to the U.S. Supreme Court.

Berman made clear in his letter to the judge, though, that jurors may get to eventually hear and consider some of that evidence anyway.

He said the prosecution could introduce evidence at the trial in the case that the defense would say should be protected by the speech or debate clause.

"Should the defendants object to any of that evidence, and should their objections be overruled, they will of course be entitled to seek redress in the Court of Appeals" – but only after the jury had rendered a verdict in the case, Berman said.