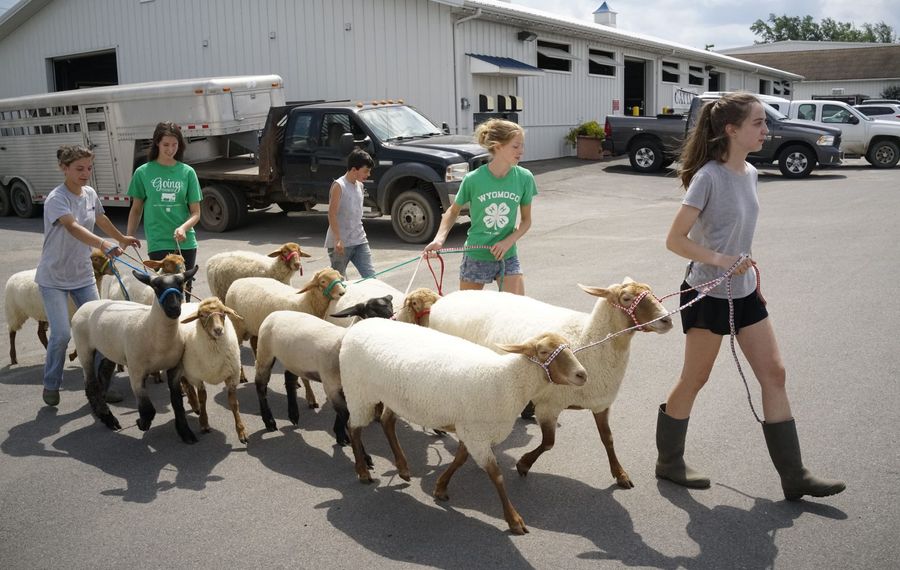 You could always count on seeing horse racing during the Erie County Fair.

This year you'll also be able to see a new kind of competition: drone racing.

More than 50 drone pilots from around the world will compete in the race on Aug. 10 and 11, one of three master-level events conducted internationally this year.

It's one of many ways the fair is a paradox: It is the same every year. It changes every year.

“Reinventing the old while we look to the future," is how Marty Biniasz, the fair's marketing director, puts it.

The 180th Erie County Fair, the largest in the country outside of California, runs Wednesday through Aug. 18 at the Fairgrounds in Hamburg. Its milelong midway features 60 rides and 20 attractions; some 13,000 competitors vying for ribbons; and the debut of 30 novel foods. Attendance at the 2018 version was just shy of 1.2 million. With summerlike weather in the forecast for days, the 2014 record of 1.22 million could be in reach. 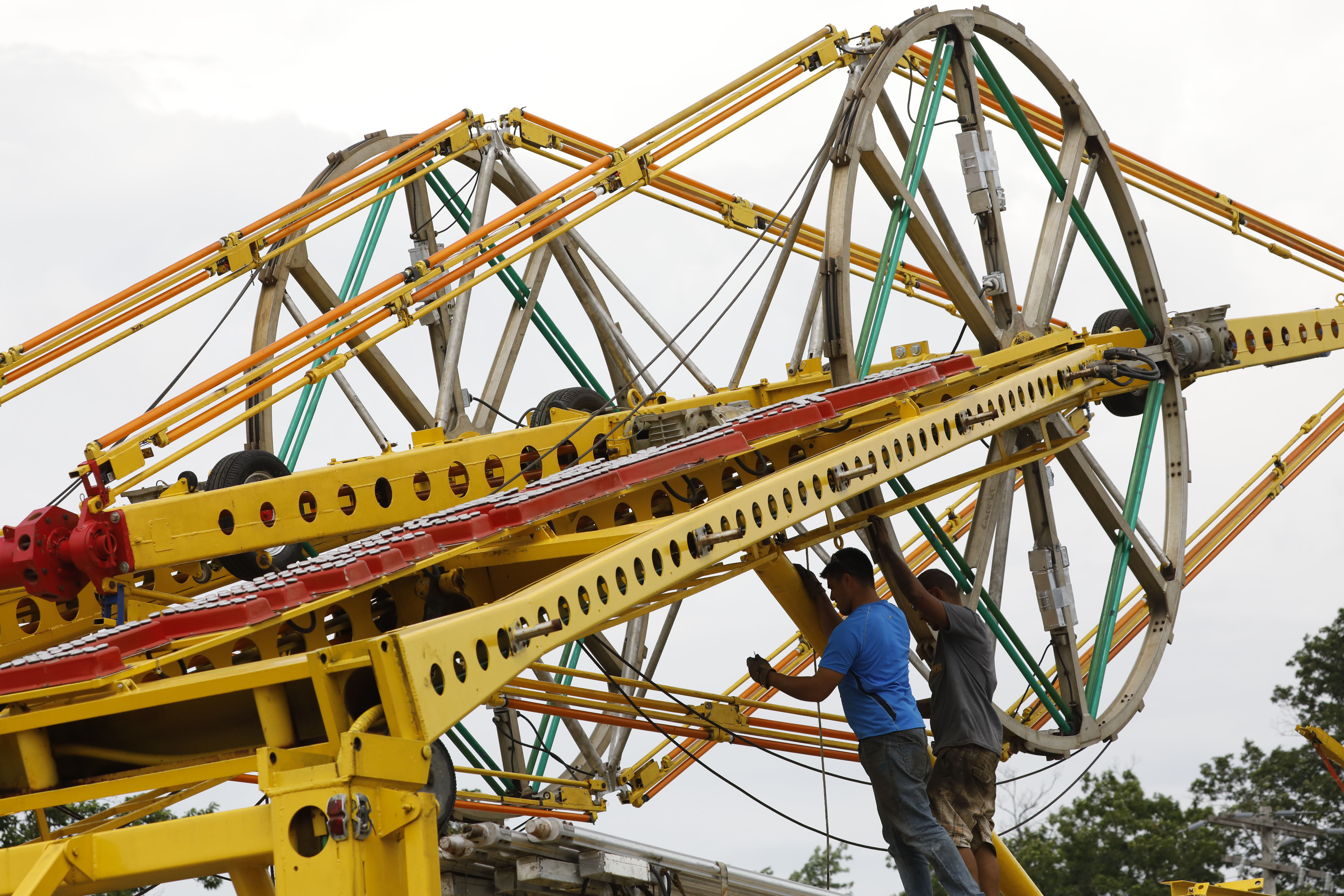 Workers set up the newly restored SkyWheel while preparing for the opening day of the Erie County Fair. (Derek Gee/Buffalo News)

Among the rides from the James E. Strates Shows that will greet midway walkers will be the SkyWheel, a double Ferris wheel that once was a fair fixture but has been absent since the 1990s.

James Strates, the oldest of three brothers who own and operate the family amusement business, described the ride simply: “It’s not a regular Ferris wheel. It will scare you to death. Each wheel spins independently, but if the whole spoon goes over and you’re on top, you drop, the tub swings, and your stomach is in your throat.”

The Strates family is as synonymous with the fair as farm animals and vinegar-soaked french fries. James E. Strates was a Greek immigrant, a sideshow carnival wrestler from Endicott who started his own midway company. A letter dated 1923 from Strates – on display in the octagonal Heritage and History Center – marked the beginning of a tradition that continues today.

“It’s the longest running contract between any fair and amusement company in the history of modern amusements,” said Biniasz.

Upon Strates' death in 1959, the business was passed on to his son who today is in his 90s, and unable to attend the events this year. His sons – James, John and Jay – operate the business and made the trip to Hamburg to mark their company’s 95th year with the fair.

The traveling show based in Orlando has survived in an industry where others have failed. Burlesque, a colorful part of the fair’s history, was last in Hamburg in the late 1980s. Other sideshows with stars like Headless Donna, Tiny Tina and the world’s tiniest horse are also gone. The Museum of Oddities closed, too.

“Neither of the country’s two remaining traveling sideshows made the trip to Hamburg this year,” said John Strates.

The family filled the void in entertainment with amusement rides that include Crazy Mouse, Enterprise, Starship and the Claw. Even the Frisbee is making its debut in Hamburg this year. The European-manufactured amusement takes five rail cars to transport.

The Erie County Fair is the fourth largest county fair in the nation behind three on the West Coast: Los Angeles, Orange and San Diego counties, according to CarnivalWarehouse.

But as much as the historic business has kept up with the changes, this county fair was built on agriculture.

A news story from The Buffalo Republican in Oct. 30, 1821 – also on display in the history building – recounts the judging process for stock and domestic fabrics. The judging was preceded by services at St. Joseph’s Cathedral and followed by the Agriculture Ball at Rathbone’s Hotel.

Today, the Ag-Grange Building returns to the roots of the fair, featuring the works of thousands of Western New Yorkers who have been preparing vegetables, flowers, artwork, animals, pies, hay and maple syrup. Monday was judgment day for flowers. On Tuesday, maple syrup, rhubarb, hay, string beans and eggplant faced scrutiny.

“It’s just not as nice a vegetable as it should be,” said James Agle looking with disdain at a stalk of rhubarb discolored by a stress-related disease. Agle, commercial vegetable grower, judged vegetables since the 1950s when he was in 4-H.

[Related: What to do as a first-timer at the Erie County Fair] 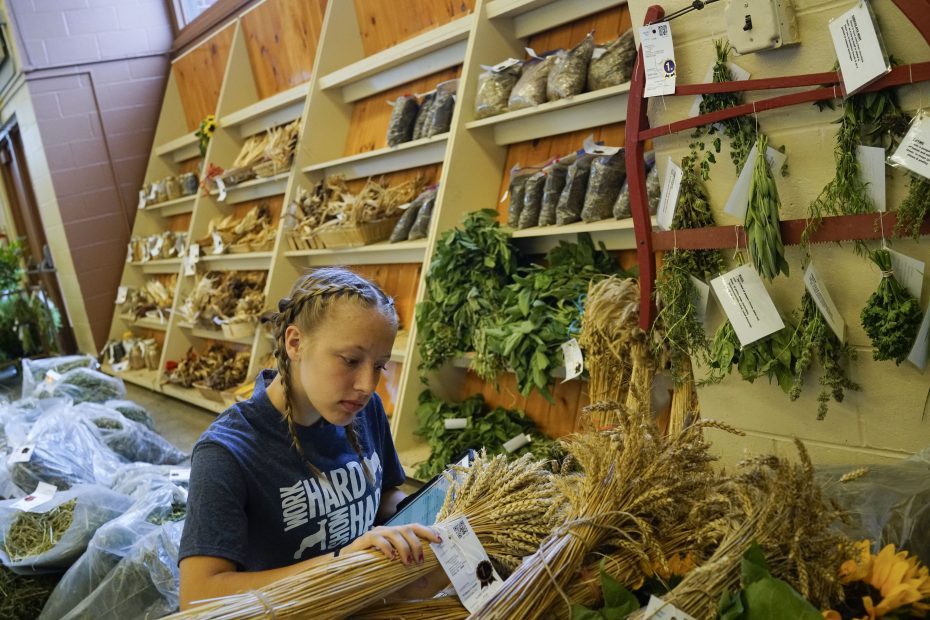 As the judges award places to entries in the agriculture competitions, staff members like Ella Underberg record the official results. (Derek Gee/Buffalo News)

Judging was conducted on the other end of the building, too, where Eric Randall, a vegetable botanist, and Lisa Lopez deliberated over maple syrup. They debated density, sugar percentage, color and taste.

“Feel this and smell it,” said Winchell offering two fistfuls of hay dug from bales arranged in one corner of the Ag-Grange Building. “It smells good. They are both of good quality, but this one might burn your barn down,” he said, pointing out a moist bunch.

Also new at the fair is Dairy Row, featuring the area’s top agricultural commodity with interpretive kiosks focusing on calf feedings, breeds and production. “Western,” the Jersey heifer born at the fair last year, is a star on Dairy Row.

Judging continues on Wednesday, when the fair will open at noon.