Marv Levy turned 94 over the weekend, and I suspect I know his birthday wish.

I wrote a profile story on the Buffalo Bills’ Super Bowl-era head coach after visiting his home in Chicago last month, and Levy spoke passionately about his desire to see two of his former players honored. He is adamant that linebacker Cornelius Bennett should be named to the Bills’ Wall of Fame, and wrote a letter saying so to team co-owner and President Kim Pegula. (A team official told the News that the Bills aren’t naming anyone to the Wall this season, and are instead focusing on festivities around the franchise’s 60th anniversary and the NFL’s centennial season.)

Levy is also still hoping his former special-teams star, Steve Tasker, will join him and several of his Bills teammates in the Pro Football Hall of Fame. Tasker’s prospects may have seemed to get a boost during this weekend’s enshrinement festivities, when the Hall announced its 2020 class will have 20 inductees, coinciding with the league’s 100th anniversary. (In a normal year, the Hall class maxes at eight.) A closer look suggests the one-time change doesn’t help Tasker, at least not immediately, because the 20-man class will include five modern-era players, three contributors, two coaches, and 10 seniors — players who have been retired for 25 seasons or more. Tasker retired in 1997, which leaves him three seasons short.

Of course, unjamming the backlog of players awaiting Hall induction may open space for Tasker in later years, which may mean Hall selectors will have reason to dust off the letter Levy sent them in 2017. It’s two years old, but Levy feels as strongly now as when he wrote it, and emailed me a copy of that letter shortly after our interview in Chicago. Here’s the full text (and then read on for other outtakes and updates, including the Levy family’s long-awaited visit to Marv’s Hall of Fame bust, Don Shula’s comments on his former rival, and more on Levy’s by-chance meeting with a star of “The Bachelorette”):

Dear Members of The Selection Committee,

Among the many outstanding former NFL players who are on the list of finalists under consideration for induction into the upcoming 2018 class at the Pro Football Hall of Fame there is one about whom I feel most strongly is deserving of that wonderful honor.

I am referring to Steve Tasker, without any doubt the greatest hardcore special teams player in the hallowed history of the game. 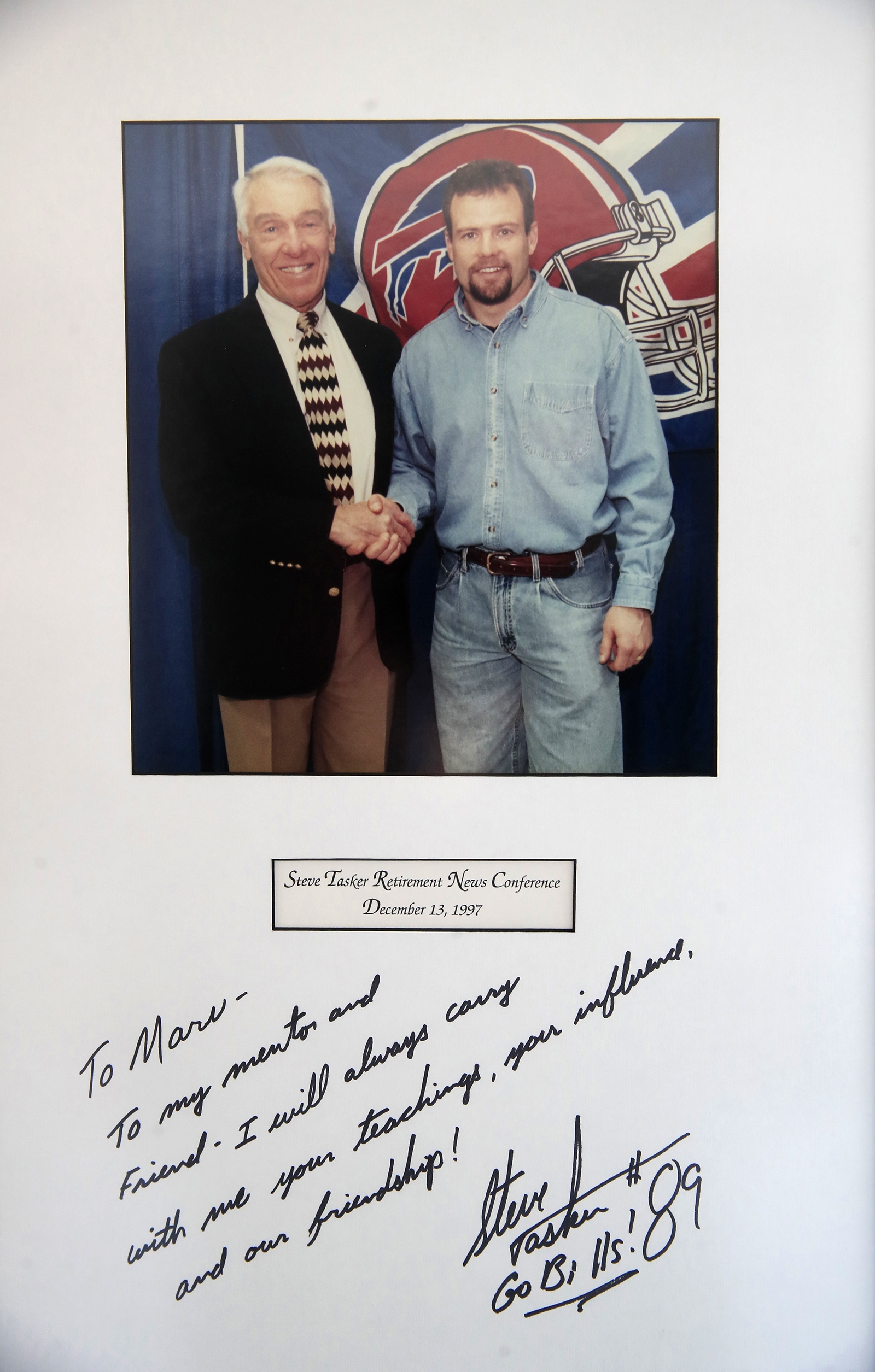 A signed photo from Steve Tasker hangs on the wall of Marv Levy's office in his Chicago home. (Harry Scull Jr./Buffalo News)

I, as a former NFL coach and as one of the first two (Dick Vermeil is the other one) ever hired way back in 1969 as a Special Teams Coach, have always believed deeply that there are three EQUALLY IMPORTANT departments of play in determining the outcome of every game.  I am referring, of course, to 1. Offense, 2. Defense, and 3. KICKING GAME.

There are currently three well deserved former NFL kickers (Jan Stenerud, Ray Guy, and Morten Andersen) who are members of the Pro football Hall of Fame, but there is not a single former hardcore special teamer who has been so acknowledged and honored. And among the many talented and courageous men who have played that hardcore role over the NFL’s many years, there is, in my opinion, no other player whose performances and accomplishments can match those of Steve Tasker.

Yes, that is my opinion, but every other NFL coach with whom I have discussed the subject has told me that they, too, believe that Steve Tasker is the greatest hardcore special teams player in the history of professional football.

Whether it was blocking kicks, covering punts and kickoffs, returning kicks or blocking on kick returns, recovering onside kicks, forcing fumbles, recovering fumbles, or flawlessly executing his assignments, Steve Tasker had no equal in the history of the game.

On seven occasions Steve Tasker was selected for and played in the Pro Bowl Game.  That equaled the number of times that his Hall of Fame teammate Bruce Smith was also selected.

Beginning in 1990 Steve was the AFC hardcore Pro Bowl special teams selectee for six consecutive seasons and at the conclusion of the 1993 Pro Bowl Game he was designated as the game’s MVP, the only time in that game’s history that such an honor has been accorded to a special teams player.

In every survey that I have ever read, including one a few years ago from the Pro Football Hall of Fame, in which the “ALL TIME NFL TEAM” was selected, the single hardcore special teams player designated has always been - - - - Steve Tasker.

For all these reasons (and for many more including his high character qualities, his team orientation, his love of and his honoring of the game, his exemplary family qualities, and good citizenship to name just a few) I highly recommend Steve Tasker for induction into the Pro Football Hall of Fame, Class of 2018. 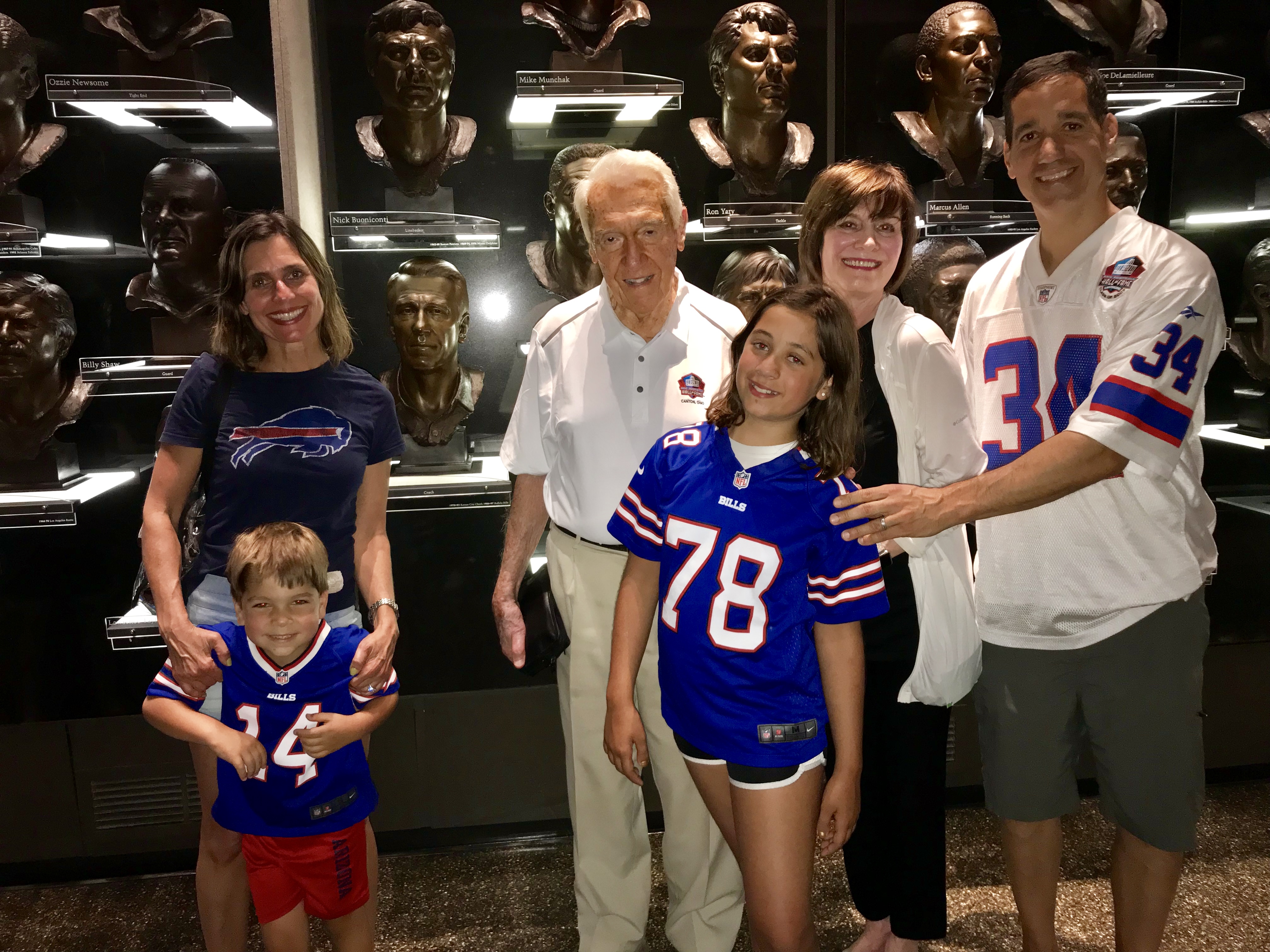 Finally visiting the bust with Papa

During my interview at Levy’s Chicago home, I pointed out that in 1996, he penned a tribute in Sports Illustrated to his Miami Dolphins rival Don Shula.

“Someday soon,” Levy wrote, “I intend to take my grandchild to the Pro Football Hall of Fame. When I point to that bronze statue, I’ll say, ‘See that jut-jawed man? Now, there was a football coach.’ ” 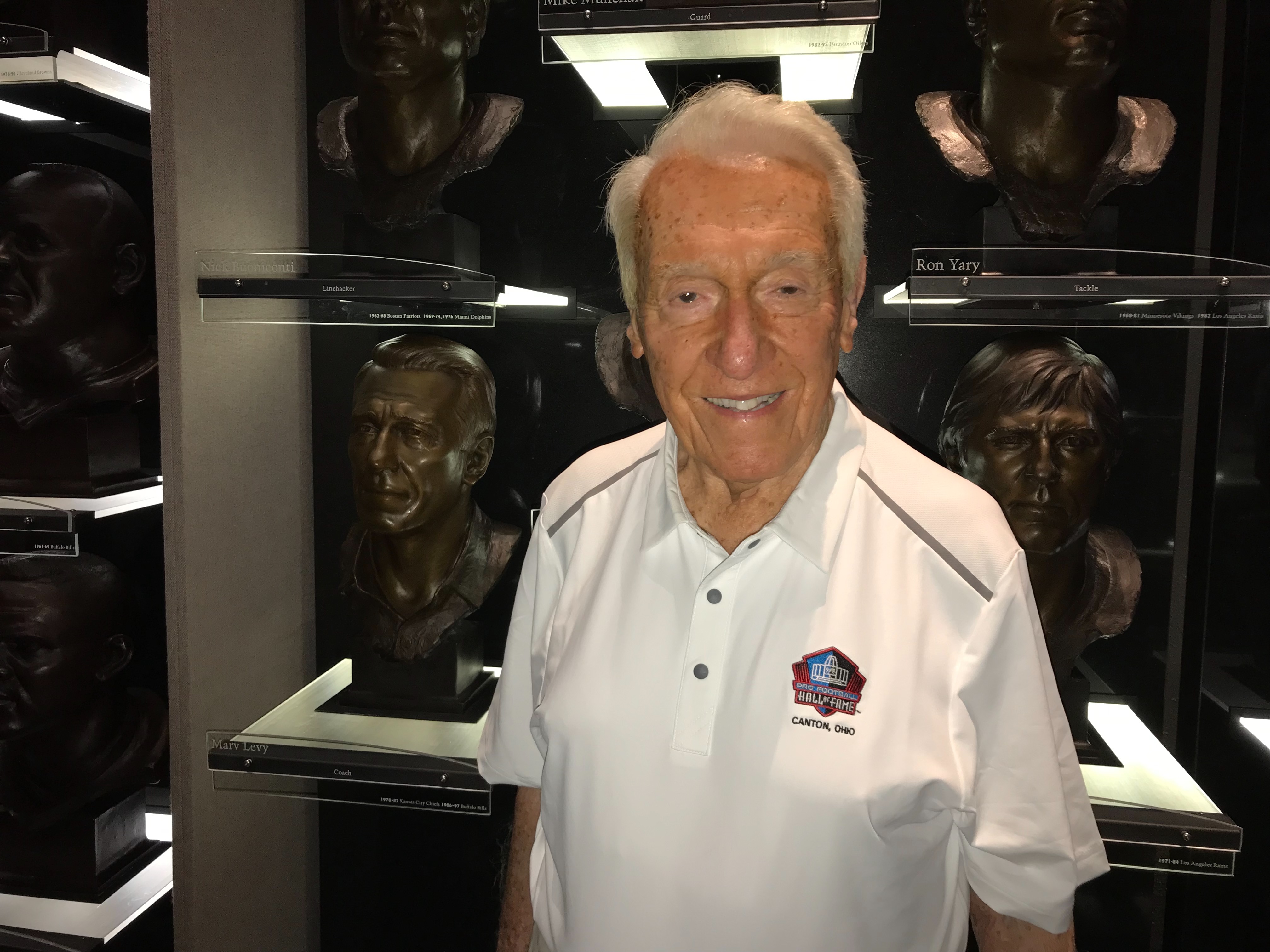 Marv Levy had occasionally visited his bust in Canton since his 2001 induction, but had never visited with his family until now. (Photo courtesy of Kimberly Alexopoulos)

At the time, Levy didn’t have grandchildren. But he does now: Angela, who turns 11 this month, and George, who is 4. They were present for the interview with their mom, Kimberly Alexopoulos, who is Levy’s daughter, their dad Greg Alexopoulos, and their grandmother and Levy’s wife, Fran.

Now that you have your own grandchildren, I wondered aloud, what was it like when you saw your bust with them?

It turns out that the family had never seen Papa Marv’s bust with him, which set off a touching exchange in which Kimberly insisted they had to make time to do that.

On the evening of Saturday, Aug. 3, both Levy’s birthday and the Hall’s enshrinement day, I received an email from Kimberly with the subject line “We did it!” She attached four photos, two of Levy posing solo with his bust, one of him with George, who wore a No. 14 Frank Reich jersey, and Angela, who wore Bruce Smith’s No. 78, and a shot of the full family.

“Thanks for planting the seed,” she wrote. “We did it!!  Milestone for us!” 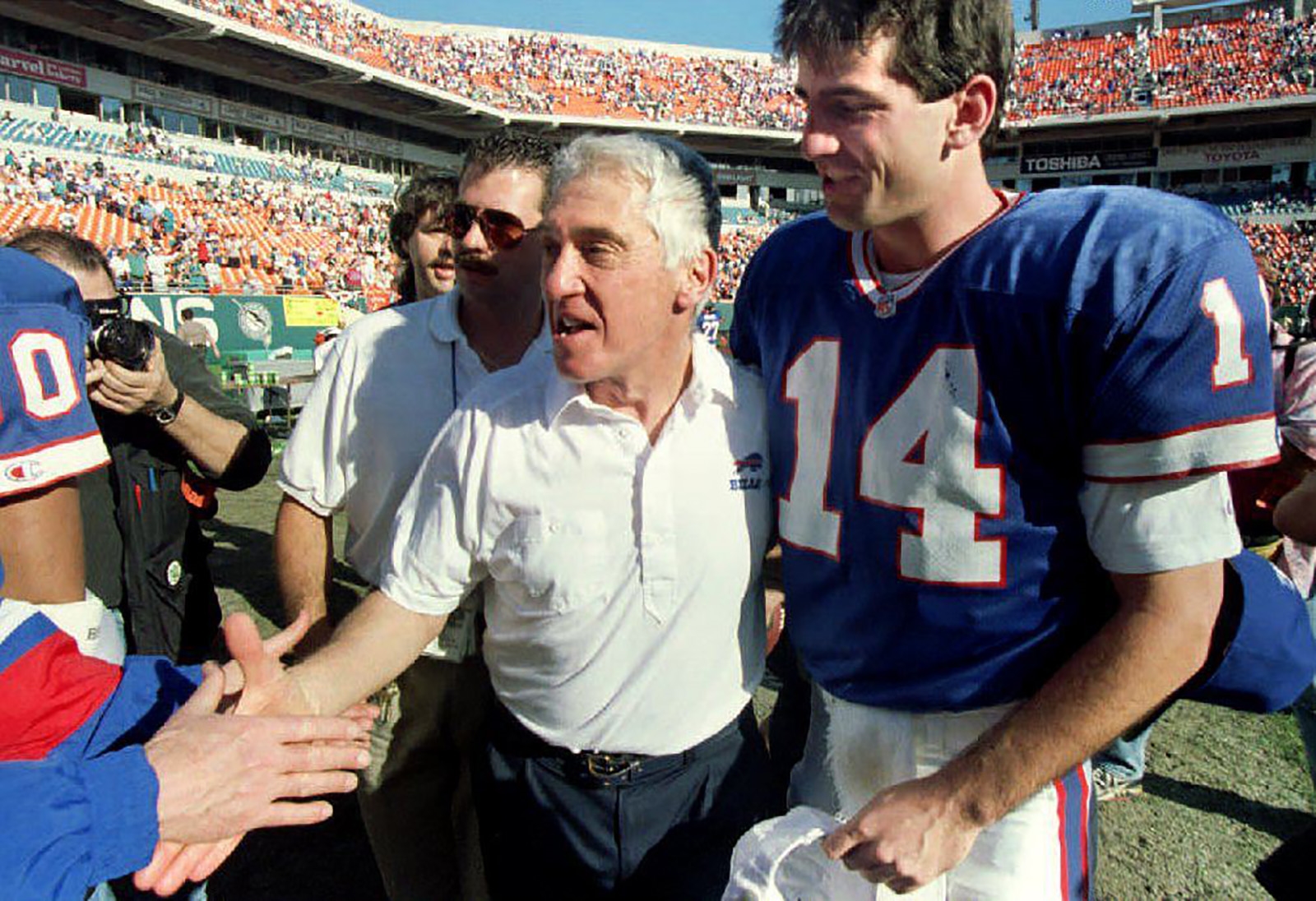 Bills coach Marv Levy is congratulated by his players on Jan. 17, 1993, after the Bills defeated the Miami Dolphins 29-10 to win the AFC football championship in Miami, Fla. At right is Bills backup quarterback Frank Reich. (Getty Images)

Though our conversation in Chicago veered away from Shula, it had me wondering: What would the Dolphins’ Hall of Fame coach say about Levy? I reached Shula, who is 89 and living in California, through an assistant who asked me to text some questions. I asked about their relationship, their rivalry, and Levy’s impact on football.

“I have the utmost respect for Marv and his many contributions. I haven’t seen Marv since retiring but I feel we both have great career memories and share a love for the game. I have great admiration for Marv, as a coach and as a human being. Marv was a very intelligent, competitive, professional and likable guy. I always felt Marv was one of the best teachers/coaches the game had known. There was a hugely competitive rivalry between our teams, with passionate fans on both sides. I always knew his team was going to be well prepared, with 100% effort. I had to respond accordingly.”

At age 93, there's nowhere else Marv Levy would rather be

Not surprisingly, having Marv Levy as your dad can lead to some cool moments. One of those for Kimberly came last season when she spotted Jason Tartick, the Buffalo man who became a TV star on “The Bachelorette,” at New Era Field. Kimberly and family, including Levy, were riding through the crowd on a golf cart. She asked the driver to stop and called Tartick over for a photo.

A few days ago, after the profile story was published, Kimberly emailed the photo to me. Here it is: 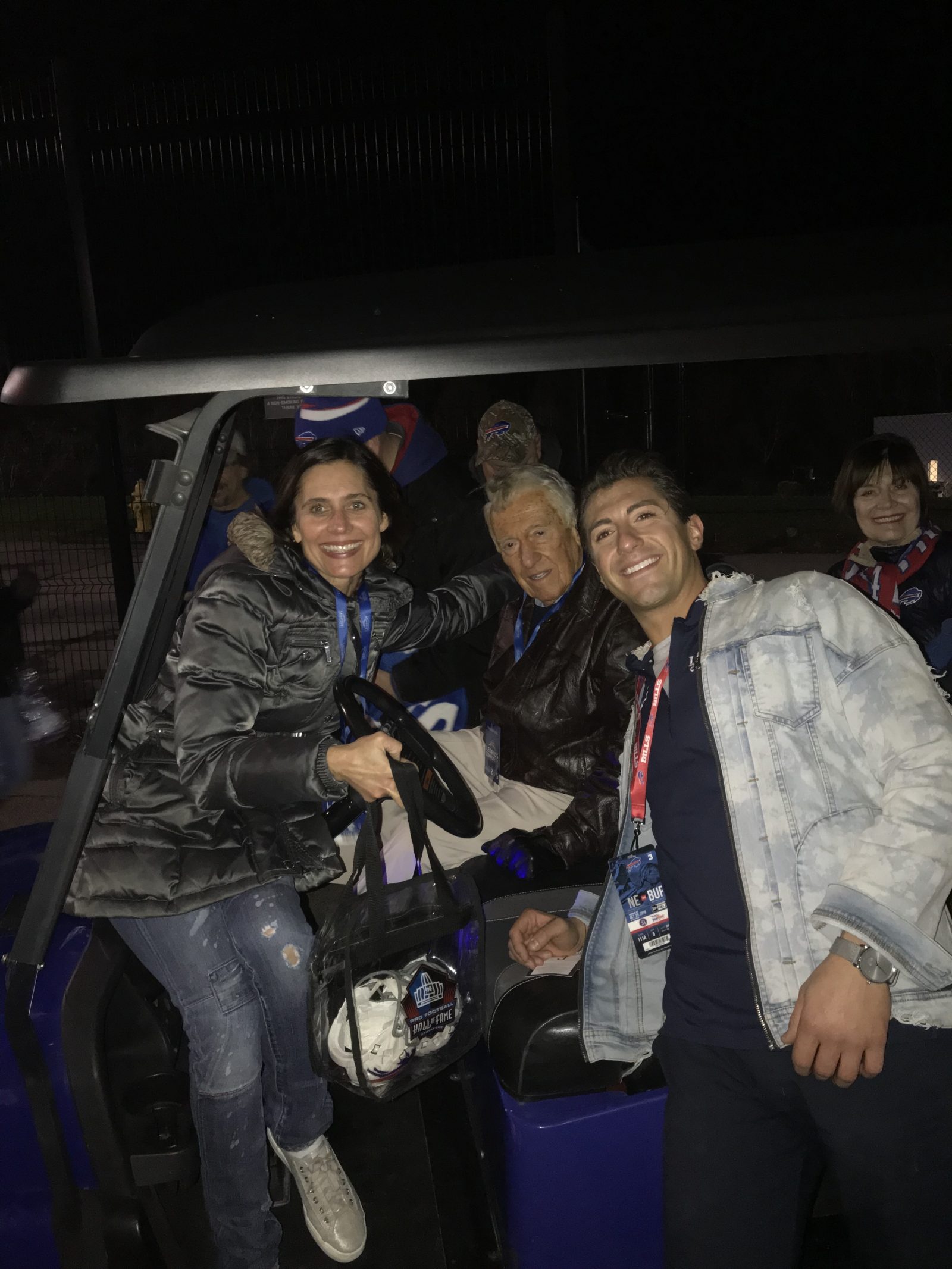 A few months after that photo was taken, Kimberly was watching a season preview of “The Bachelor” and saw Tartick whip up the crowd by quoting Levy’s most famous line, “Where else would you rather be than right here, right now?”

Kimberly was thrilled – “He just quoted my dad!” she said – and as it turns out, so was Tartick.

After the story was published last week, Tartick tweeted, “What an inspiration and legend Mr. Marv Levy is to the city of Buffalo and the Buffalo  Bills … how could I not quote him when I had the one chance to do so on a nationally televised live platform!?”

Tartick answered: “It took over a year, but my man Elan is officially a member of the #BillsMafia.”

So there you have it: Levy, who doesn’t even watch “The Bachelor,” just might have helped convert Gale into a Bills fan. Now if he could only get those Hall selectors to cast ballots for Tasker...

What an inspiration and legend Mr. Marv Levy is to the city of Buffalo and the Buffalo Bills...how could I not quote him when I had the one chance to do so on a nationally televised live platform!?

🤣🤣🤣 it took over a year, but my man Elan is officially a member of the #BillsMafia