If you've been car shopping lately, then you may already know about the many advanced driving-assist features that are increasingly become standard safety equipment: automated collision warnings and emergency braking, blind-spot detection alerts, and lane assist features that will gently nudge your car back into its lane if it starts to drift.

Then there's what you see in the movies – driverless vehicles that smoothly transport passengers or enthusiastically transport superheroes. The University at Buffalo had a version of that on display Saturday, a $250,000 driverless shuttle bus called Olli, which resembles a giant, space-age toaster on wheels. It's currently being tested on the North Campus.

But to get from our current reality to the driverless-car reality is still expected to take decades. And part of the reason is because of major questions of safety, cost, security and data privacy.

To address some of these fears and concerns, about 90 residents throughout the Buffalo region participated in a day-long community forum at the UB South Campus Saturday as part of an international study regarding people's hopes, concerns and fears about "driverless mobility." Their opinions are being blended with those from residents living in other cities and countries.

In many cases, people came in excited about the prospects for driverless vehicles. They seemed interested in the ways that  driverless vehicles might save them time on the road, increase transportation accessibility and make driving safer.

But after reading the various scenarios about the challenges facing this new technology and watching a NOVA documentary clip showing the limited ability for driving computers to mimic the perception of the human brain and the inclination for passengers to be less alert to their surroundings, they were much less gung-ho.

"I was a lot more excited about driverless mobility before I got here," said Amanda Harsin, a West Side resident with disabilities, who has an autistic son and is unable to drive. "But now I’m a lot more intimidated."

The group of participants at her table included people who had come to the forum by bus, carpool, motorcycle and car. Some rely entirely on public transportation. Others regularly use their own cars, or use their cars on a limited basis because of health and eyesight issues.

Antonia Monaco, a Buffalo resident in the Lovejoy neighborhood, went from being interested to dead-set against the technology.

"What if there’s a glitch?" she said. "Computers always have glitches."

The participants also expressed serious concerns about data security and data privacy. What if these computer-networked vehicles get hacked or infected with viruses? What about private corporations getting their hands on data showing all your driving habits and all the places you visit?

"Maybe we’re doing away with some of the old problems," he said, "but we’re creating new ones."

East Side resident Sylvia Lloyd referred to the recent hacker data breach of more than 100 million Capital One credit card accounts. She wondered how much risk she'd be willing to take for the sake of the added convenience.

Hamburg resident Brad Newman, an electric motor mechanic who owns a car, SUV and motorcycle, had concerns as a vehicle enthusiast. He enjoys the ability to work on and rebuild vehicles. He wondered if that would be possible in a future reality where driverless cars were the norm for society – either heavily regulated by governments or heavily controlled by transportation corporations like Uber or Lyft.

There are currently no completely driverless vehicles allowed on public roads. Instead, aside from cars that are 100% manually driven, there are cars with driver-assisted technology on the roads, and cars like Tesla's that can drive themselves in some instances, but not all, and still require someone behind the wheel.

The Greater Buffalo Niagara Regional Transportation Council community forum was held at the UB South Campus as part of an international series organized by Arizona State University and the Paris-based Missions Publiques.

During a break, forum participants got a first-hand look at Olli, the driverless UB shuttle bus being tested on a 1.5-mile private service road on the UB North Campus. Cute and boxy, the black, white and teal-colored bus with eight seats and standing room for several more sat parked in front of Hayes Hall for forum participants to tour.

Olli couldn't give anyone a ride since it's illegal in New York State for driverless vehicles without a steering wheels to use public roads. Olli, created by Arizona-based Local Motors, only has a steering joystick and hand brake for emergencies.

In addition, the South Campus didn't have the proper mapping to enable the bus to "see" the roadways. Visitors wandering around the bus, however, showed up on the screen as little yellow dots. The bus, featuringd radar detectors, four front-and-back cameras and multiple laser sensors on all four sides, can go as fast as 25 mph. But in on-campus testing, it doesn't exceed 15 mph, said Li Tang, one of the doctoral engineering students testing the vehicle over the past year. 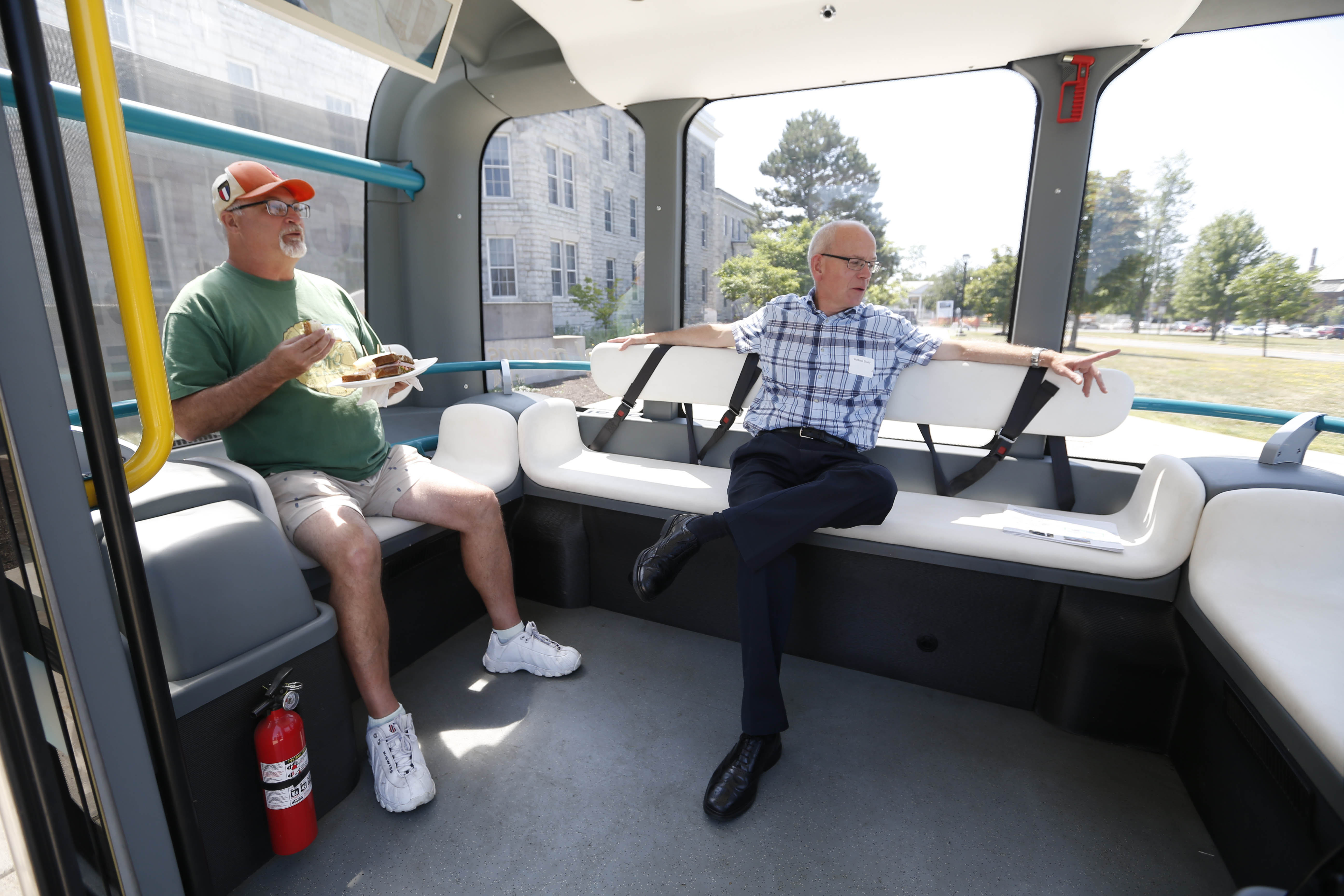 Forum participants, Chris Weinert, left, of Buffalo, and Michael Shelly, of Lancaster, check out Olli, the driverless shuttle bus being tested by UB faculty and students for the past year. (Sharon Cantillon/Buffalo News)

Driverless bus about to be tested on UB's North Campus