As the University at Buffalo's interim men’s basketball coach and as a candidate for the opening vacated by Nate Oats, Jim Whitesell knew he needed a plan.

Even before he was named UB's coach April 6, Whitesell understood recruiting would be a significant challenge. In his 10-day tenure as UB’s interim head basketball coach, he had already started assembling a list of players to pursue.

Whitesell’s preemptive measures quickly became necessary. In the wake of Oats’ departure on March 27 to become the head coach at Alabama, UB’s entire recruiting class for 2019 left, too.

Noah Williams, a 6-foot-5, three-star guard from Seattle, announced April 3 that he had decommitted. Then, UB granted releases from National Letters of Intents in mid-April for three more players: Andre Allen, a 6-foot-9-inch forward for Arizona Western; Jamestown native James Rojas, a 6-7 forward from Hutchinson (Kan.) Community College; and Durey Cadwell, a 6-5 guard from Daytona State College in Florida.

Instead, Whitesell didn't hesitate to make headway, even as he also had to finish assembling his coaching and support staff. That meant making calls within hours of being hired, bringing players in for visits on campus and adhering to the NCAA’s recruiting calendar.

Whitesell was hired with four days remaining in a dead period when there can be no face-to-face contact with recruits or in-person evaluations and recruits cannot come to campus, although coaches can communicate with players on the phone or electronically. After a three-day recruiting period, the NCAA then mandates another four-day dead period in mid-April, meaning that Whitesell could not have in-person contact with recruits on nine of his first 12 days on the job.

The anxiety among fans that followed the decommitments and the departure of Oats and top recruiter Bryan Hodgson never fazed Whitesell.

“We didn't panic," Whitesell said. "We had the window and we knew there were a couple kids interested right away. As soon as I got the job, we started doing homework, and we looked at who was out there. We were on that right away. With the success we’ve had, you want to get the kids on campus. The biggest thing we ran into – and any new coach runs into – is that dead period, then the live period, the recruiting period, the dead period. It was really important we got people on campus during the time we could do that."

“We’re pleased with the way it came out," Whitesell said. "Now we have to go to work and get them to understand the culture.” 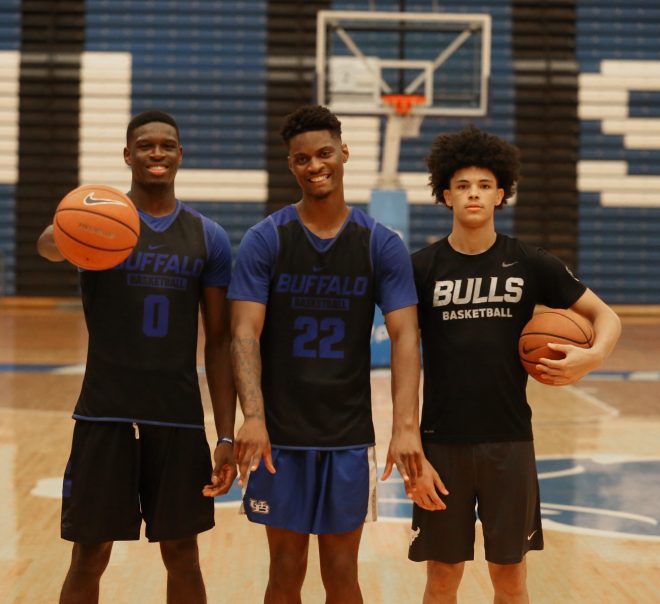 Whitesell was able to stand on the reputation that UB had built in recruiting circles for developing players, given the Bulls' recent success.

Not only did he have to replace four recruits, but UB was losing five players to graduation off its nationally ranked team. Building a new roster was paramount.

“The big thing is, you want to replace what you lost,” Whitesell said. “It’s not easy to replace that. You need guys who understand the style we’ve been playing. We’ve been athletic and unselfish in terms of moving the ball, and it was about finding guys who can grow in the program.”

Whitesell and his staff also had to find out who among the remaining players was committed to continuing the culture in the program, and how to stabilize the incoming class for the long term.

“When you move to the top chair, it’s not just, find guys who are interested – it’s finding out who’s actually going to be here,” said Dan McDonald, a college basketball recruiting analyst for Rivals.com. “(Whitesell) had to figure out, what positions do we need? How do we space out the rosters with seniors and juniors, and young guys? Class separation and roster balance are key in that.”

Once he identified prospective players, Whitesell had a direct pitch: Come in, make an impact and be part of a winning program but also a member of a close-knit family.

"They treated me like family, with love," Gallion said. "The players are really serious about what they do. They do well in the classroom and that motivates me to do better in the classroom."

Nickelberry became the first player to join Whitesell’s recruiting class. The 6-foot-7 wing from Orlando, Fla., said Whitesell called him the weekend he became UB’s coach. The new coach’s enthusiasm about crafting his own program immediately impressed Nickelberry, who also had a connection to UB; sophomore guard Ronaldo Segu is one of his former AAU teammates.

Two weeks after Whitesell initially contacted Nickelberry, the junior-college player announced April 21 that he had committed to the Bulls. Nickelberry will have two seasons of eligibility at UB, and said he liked the high-tempo pace of the offense and its emphasis on defense. UB’s recent success also was a draw.

“The program really came out of nowhere and I’m happy that I got to see where they see me and what the success was these past few years, it’s phenomenal,” Nickelberry said in April, after he committed to UB. “They’ve been a top team in the country, beating WVU and Syracuse, that’s what I want. That’s the type of competition I loved, and I think I can make an impact.”

Skogman, a 6-foot-10 forward from Waukesha (Wis.) West High School, announced his commitment less than two weeks later, on May 2. That gave UB an inside presence who can block shots and can contribute to the offense – he averaged 18.6 points and 12.6 rebounds in his senior season, and shot 38.6% from three-point range – and a player the coaching staff can groom over the long term.

Gallion committed to the Bulls six days after Skogman, and less than a week after the 6-foot-4 guard from Washington, D.C., visited campus. Recruited primarily by UB assistant Jamie Quarles – whom Whitesell retained from Oats’ staff – Gallion spent a year at Mount Zion Prep in Lanham, Md., where he averaged 13 points, six rebounds and five assists per game. He also refined his defensive game and his ability to shoot from outside.

But the Bulls couldn’t rely solely on junior-college players, prep products and high schoolers with raw talent. The coaching staff placed a value in pursuing players with Division I experience, who could fill the inside holes left by the graduation of 6-foot-8 Nick Perkins and 6-foot-10 Montell McRae.

Hardnett had visited UB during his senior year of high school in 2017-18. Cincinnati and UB were originally his top two choices, but he picked the Bearcats. He opted to transfer when coach Mick Cronin left Cincinnati for UCLA.

“As soon as Coach Whitesell became the head coach, I knew he would do what he had to do to fill the roster,” Hardnett said. “He’s done a splendid job of taking over the program.”

UB announced July 22 that the NCAA granted a transfer waiver for Hardnett, who redshirted last year as a freshman at Cincinnati, but Mballa’s waiver is pending.

Whitesell wanted immediate Division I experience in his lineup, despite the fact that either one or both could possibly sit out one season.

“Bringing both of these guys in, from two programs that have been in the Final Four and in the top 25, we felt like that’s important there,” Whitesell said. “And they’re front-line players, where we needed the most (experience), guys who are 6-foot-7 or better. Adding those guys are important to us, and they’re used to high-level basketball and they’re used to being coached.”

“For those guys to have that experience and that knowledge and where they need to improve on, that is invaluable for us.”

With his Class of 2019 completed, Whitesell was actively on the road during the evaluations periods in June and July, making offers for future classes. UB has 13 reported offers out for the Class of 2020, according to verbalcommits.com, and another five in the Class of 2021, including All-Western New York second-team guard Jalen Bradberry of the Park School.

What also helped rebuild the team is that only one player from the 2018-19 roster plans to transfer: Colby Moultrie, a 6-foot-3 guard who averaged 0.3 points and 0.3 assists in two seasons at UB.

“You lose five really good players (to graduation) and that’s a heavy group to replace,” Whitesell said. “We knew there was a void, but the big emphasis was on the returning guys,” Whitesell said. “We had a good core and we needed to help the core of Jayvon Graves, Davonta Jordan, Brock Bertram, Antwain Johnson and Gabe Grant. We felt that core group has got to be elevated. They have to make a jump as a group and individually.

“But adding that five-person class was definitely a good thing.”

It’s not uncommon to see some turnover when there’s a shakeup in a program, whether it’s a coach who leaves or is fired, or if the NCAA levies sanctions against a program. However, it’s not common to see entire recruiting classes disappear with the departure of a coach, under whatever circumstances.

Virginia Tech rebuilt its class under new head coach Mike Young, but McDonald pointed out a decided advantage for Buffalo.

“Virginia Tech was fourth, fifth or sixth in the ACC,” McDonald said. “Buffalo’s been at the top of the MAC. What Buffalo has going is that they’ve played in the (NCAA) tournament a couple years, they play a fun style, and they’ve earned some quality wins. It’s made Buffalo seen as a cooler place to play.”

“There’s a difference between UB and Virginia Tech. While UB isn’t a Power Five program, UB’s reputation means something in recruiting.”