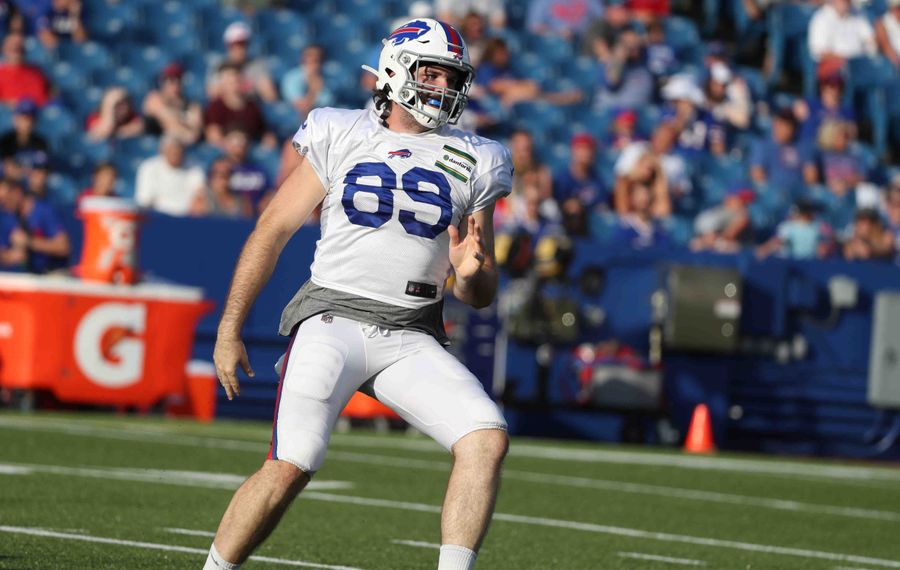 Here are my observations from the Bills’ eighth practice of training camp Friday night:

1. Tommy Sweeney isn’t quite the last man standing at tight end for the Buffalo Bills, but it’s getting close.

Sweeney, a seventh-round draft pick out of Boston College, has risen up the depth chart this summer mostly because of what’s happening around him. Presumed starter Tyler Kroft, veteran Jason Croom and third-round draft pick Dawson Knox all currently are out with injuries. That has given Sweeney the chance to work with the starters, including Friday night as part of the team’s “Return of the Blue and Red” practice in front of about 10,000 fans at New Era Field.

Sweeney had one of the highlight plays during 11-on-11 work, getting behind fellow Boston College product Matt Milano for a big gain on a completion from Allen.

“It was a good 6 seconds holding the ball back there,” Milano joked before talking up Sweeney. “He's been good. He's been doing real well. He stepped in, he looks real comfortable in that position. He's been making plays catching the ball, blocking dudes, he's just an all-around smart kid from BC. That's what you're getting from BC.”

Sweeney and Milano developed a close friendship during their time with the Eagles, and the third-year linebacker isn’t surprised about what the rookie tight end has accomplished thus far.

“He's very sneaky as to what he can do in the pass game," Milano said. "If you watch his tape, he's just making plays all over the place. You've just got to step in and do whatever you can to make a name for yourself, and I think he's doing that here.”

There’s no time frame on when Kroft, Knox or Croom will be back in the lineup, so it remains to be seen how long Sweeney’s run with the starters will last.

“A lot of crazy things have happened, but it's football,” Sweeney said. “Things like that will happen. The guys will be back. I'm just thankful for every rep I get, whether it's ones, twos, or threes, just trying to go out there, learn as much as I can, play as much as I can and get better every snap.”

While the Bills would clearly rather have all 91 players on their roster healthy and available, the injuries have allowed them to get a look at players like Sweeney, who otherwise wouldn’t get much of a look with the starters.

“I appreciate that when we've had guys that have been out, in particular on the offensive side, it seems the two positions — O-line and tight end — I feel like that's been a little bit of a challenge, but it's been good to watch how the guys who have been out there have kept their nose to the grindstone and worked,” coach Sean McDermott said. “They don't complain about who’s out there or who’s not out there. They're all about getting better.”

Sweeney, who became the first BC tight end to be drafted since Buffalo native Sean Ryan in 2004, has leaned on veteran Lee Smith during training camp.

“Lee's meant the world to me,” he said. “I think I learn 10 different things from Lee every day. He's an amazing guy, amazing man, amazing football player. He does everything right. Watching him, listening to him is just so advantageous for all us young guys.”

“That's where we are in training camp right now,” he said. “We continue to move pieces around with the goal of finding the continuity.”

Center Mitch Morse remains in concussion protocol. McDermott was asked about the concern level among the team given Morse’s history with concussions, but NFL rules permit him from saying much of anything about the situation.

“I understand where you're coming from (on) that,” he said. “I'm not going to get into that.”

4. Good to be home. This is the third straight year McDermott has brought the team home from training camp for a night practice. Doing so allows players to develop a routine ahead of the start of preseason games.

“Some of the guys, young guys in this particular case, haven't been in the locker room in the stadium before tonight, so giving them a chance before next week to get into a routine, find some comfort as to where things are,” he said. “We look forward to getting out here in front of our fans at home and drawing some energy from them. It's a great night for us to interact with our fans.”

5. Good and bad from Allen. The Bills’ quarterback displayed his remarkable arm strength during 11-on-11 work with the offense backed up near their own goal line. Allen rolled to his right and from the back of the end zone threw a strike on the run to Zay Jones at about the 20-yard line. It was the type of throw only a handful of quarterbacks in the NFL can make.

Later on in the session, though, Allen made a mistake that he simply has to get out of his system, again rolling right toward the sideline and throwing across his body to the middle of the field. Safety Dean Marlowe easily jumped in front of receiver Cole Beasley for an interception that was reminiscent of the pick Allen threw last year against Green Bay.

Also worth noting: Allen was one of the very last Bills players on the field signing autographs a full hour after practice ended.

Running back T.J. Yeldon got some work with the starters during an 11-on-11 session. That has rarely happened during camp.

7. A special handoff. Before the game, the Bills announced they had “signed” running back Will Lucas from Stone’s Buddies of Oishei Children’s Hospital. Lucas took the opening handoff of practice and took it 40 yards to the end zone.

“When you watch this young man … he's got great energy,” McDermott said. “We're thankful that he's a part of this tonight. It'll be a great moment.”