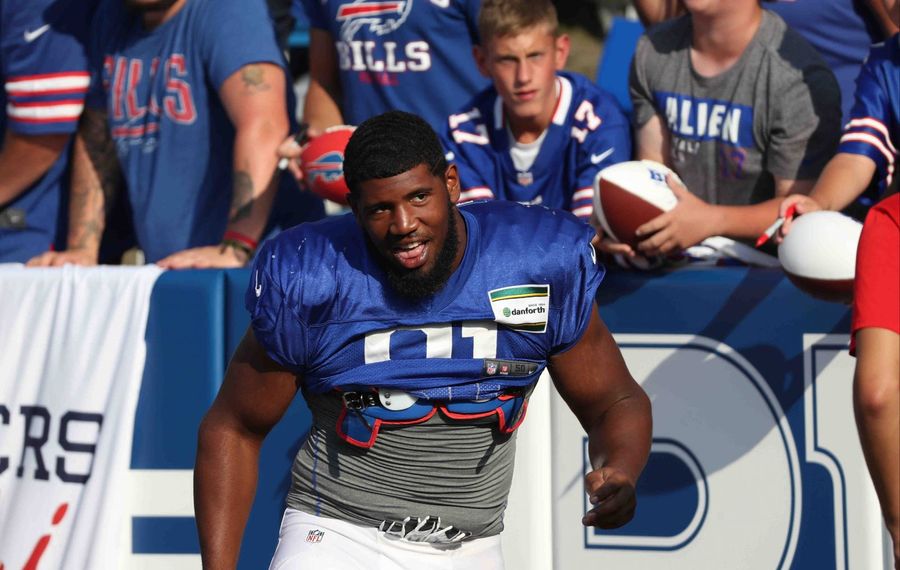 ORCHARD PARK — Ed Oliver pulled on his No. 91 jersey and walked through the tunnel at New Era Field for the first time Friday night.

The Bills’ first-round draft pick wasn’t prepared for the sight.

“I looked around and saw a whole bunch of ‘91’ jerseys,” the rookie defensive tackle said, “and I haven't even stepped on the field here, so it just shows you how much the people in the community buy in and how much they embrace the players here.”

A crowd of more than 10,000 fans turned out to watch the Bills’ annual “Return of the Blue & Red” training camp practice at the stadium, where the team ran through drills for nearly two hours before breaking for the night and signing autographs. The Bills have three more training camp dates remaining, on Sunday, Monday and Tuesday at St. John Fisher College in Pittsford. The first preseason game is at home on Thursday against the Indianapolis Colts.

“The environment was live,” said Bills wide receiver Duke Williams, on an NFL field for the first time since spending training camp with the Los Angeles Rams in 2016, before he starred in the Canadian Football League. “The fans definitely came out to support us, so we thank them for that. And Thursday night, we’re coming to put on a show, preseason or not.

“It’s going to be like a bull seeing red. All I’m going to see is red that night. Every time we run the ball I’m looking to kill something.”

Allen, entering his second season, remembered what it was like stepping onto the field here for the first time last summer.

“I was nervous as heck,” Allen said. “I had butterflies walking in here for a practice and seeing the amount of fans that showed up. It feels like a game almost. It’s still loud. People are going crazy. You can hear them behind me. We’ve got the best fanbase in the nation, I’m very convinced of that, and I’m looking forward to the season.”

Allen said this even is the first real opportunity to get a small taste of the game day atmosphere.

“It gives our free agents and our rookies a chance to see what type of fans and what type of love that they give us,” he said. “I think it’s a very big eye-opener for some people, and it’s an awesome night.”

“Mainly because you can make a kid’s day, just by putting your name and number on something that they own,”  Ford said. “You can make their whole entire year, actually. I never had the chance to go to games and practices and stuff like that, so anytime I get the chance to give back, I always make sure I do.”

Rookie third-round running back Devin Singletary said he wasn’t surprised by the atmosphere.

“Not at all. This is Bills Mafia. You know?” Singletary said. “We’ve got one of the greatest fanbases ever, so I’m not surprised at all.”

Rookie fifth-round linebacker Vosean Joseph said he tried to focus on the task at hand.

“It’s an NFL stadium, so it’s going to always be different,” Joseph said, “but we just come out with the same mindset we always have in practice, just to compete and make each other better. That was the main thing for us.”

Rookie third-round tight end Dawson Knox, who has been out since injuring his hamstring on Saturday, said walking into the stadium was an incredible experience.

“I got some chill bumps, I’m not going to lie,” Knox said. “Even though I didn’t practice today, it still was just exciting seeing where I’m going to be playing. These fans are as good as it gets, and that’s what makes it so fun for us to play. So I’m really excited to just keep working as a team and try to get better every day so we can make these fans happy.

“I’ve never seen this many people come to a practice before. Obviously, this is my first year in the league, but I didn’t expect anything like this, so it’s pretty exciting.”

Oliver pointed out one perceived shortcoming.

“The stories I heard about Buffalo, I'm not surprised” by the fans, Oliver said. “I'm surprised that they're not tailgating and jumping through tables. That's what I want to see.”