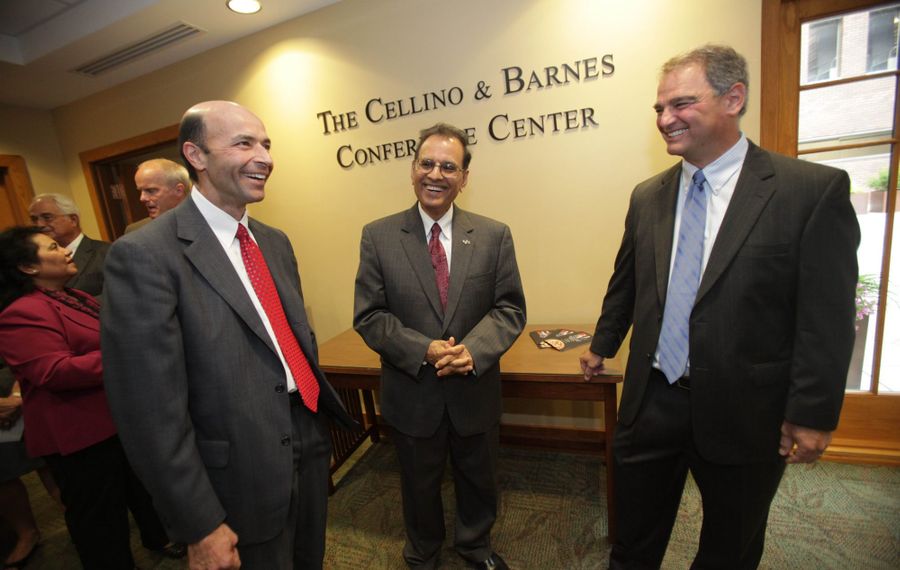 ROCHESTER – Two years after it all began, the feud over the future of one of the nation's biggest personal injury law firms – and its tip-of-the-tongue advertising slogans – shows no signs of ending.

On Friday, Stephen E. Barnes, one half of Cellino & Barnes, asked a federal judge in Rochester to issue a temporary restraining order against a competing firm initially known as Cellino & Cellino LLP.

The firm, which has since changed its name, is headed by Anna Marie Cellino and her two daughters, Jeanna and Annmarie, and she insists her husband and Barnes' partner, Ross M. Cellino Jr,. is not involved in the firm.

Barnes thinks differently and filed a federal lawsuit accusing Ross Cellino of secretly starting the firm in an effort to dissolve his old one.

The suit also points to Cellino & Barnes' immense success – each partner earned $65 million in income the past seven years – and suggests that Cellino & Cellino was trying to misappropriate that success.

"They're trying to capitalize on what Cellino & Barnes has already done," said Christopher M. Berloth, a lawyer for Barnes, on Friday.

In making his point, Berloth noted that his client's firm has been the subject of spoofs on "Saturday Night Live" and "The Late Show with Stephen Colbert" and at one point suggested there may not be a stronger legal trademark in the country.

A lawyer for the new Cellino firm argued that Barnes' lawsuit became moot when the firm changed its name to the Law Offices of Anna Marie Cellino. They also reminded the court that lawyers in New York are required under the law to use their names when advertising.

Despite that mandate, Barnes wants the court to prohibit the Cellinos from using any marketing that uses the Cellino name in a manner that infringes on its brand.

"They have to be able to use their last name," said Julie Hilliker, a lawyer for the new firm. "It cannot be that the courts would say that you can never use your last name because your father's a lawyer in the same town."

U.S. District Judge Elizabeth A. Wolford did not rule on Barnes' request for a restraining order or the Cellinos' motion to dismiss the suit.

For more than an hour, though, she questioned the lawyers about the merits of the case and whether Cellino & Barnes was harmed by the new firm's old name.

Just days after the three women announced their new law practice, Barnes sued them, alleging that the name infringed on his firm's trademark name.

A short time later, the Cellino women announced their firm would change its name to the Law Offices of Anna Marie Cellino and said they had "no interest in litigating this frivolous issue with Mr. Barnes."

Barnes' lawyer responded by calling the name change a victory for his client.

Hilliker thinks Barnes' suit should be dismissed and on Friday argued that when Barnes filed the complaint, he was in violation of a court order from the state judge overseeing Ross Cellino's suit to dissolve the firm. She said the order requires the judge's intervention whenever Barnes and Cellino cannot agree on a major decision affecting the firm.

"She's been making all the tie-breaking decisions until the dissolution is decided," Hilliker said.

Berloth countered by suggesting the name change is temporary and therefore unacceptable.

"After the dissolution proceeding, they're free to do what they want," he said. "We need something more enforceable."

The dispute over Cellino & Cellino is the latest chapter in a legal battle that threatens to end the financial juggernaut known as Cellino & Barnes.

After working together to build one of the nation’s most financially successful personal injury law firms, Cellino filed a lawsuit saying that he could no longer stand working with Barnes and seeking to dissolve the law firm.

Both men deny wrongdoing and each blames the other for their disagreements. Cellino accuses Barnes of "lies," "bullying" and deceptive financial practices. Barnes alleges that Cellino engaged in “selfish” and "reprehensible behavior," putting his own interests ahead of the firm and its clients.

Wolford, who reserved decision Friday, said she hopes to have a ruling out soon.