On Monday, a Town of Tonawanda man was indicted on a second-degree murder charge for crashing his vehicle into a senior apartment complex, killing a 94-year-old woman who had been inside watching TV.

On Wednesday, another indictment was unsealed in Supreme Court Justice Paul B. Wojtaszek's courtroom: A Long Island man was charged with vehicular manslaughter for running a red light on the city's East Side and hitting a woman at a bus stop. She died at the scene.

In both cases, the suspects are accused of being under the influence of marijuana, and Erie County District Attorney John J. Flynn said he intends to send a message to the public.

"I am not going to tolerate driving while under the influence of marijuana," Flynn said. "I am going to take a hard line on this."

Amid the debate earlier this year about legalizing the adult, recreational use of marijuana in New York, Flynn had raised concerns about driving while high.

"My No. 1 concern has been the safety of our roads," Flynn said.

State lawmakers did not legalize recreational marijuana but further decriminalized the possession of marijuana, making possession of up to 2 ounces of pot a violation, lower than a misdemeanor. That law goes into effect in a month.

The murder case involves Edward Harris, 33. At about 7 p.m. March 26, prosecutors say, Harris was speeding on Oakridge Avenue in the Town of Tonawanda when he crossed Delaware Avenue into a parking lot, hit a parked car and then slammed into the Ken-Ton Presbyterian Village apartments, a senior apartment complex. 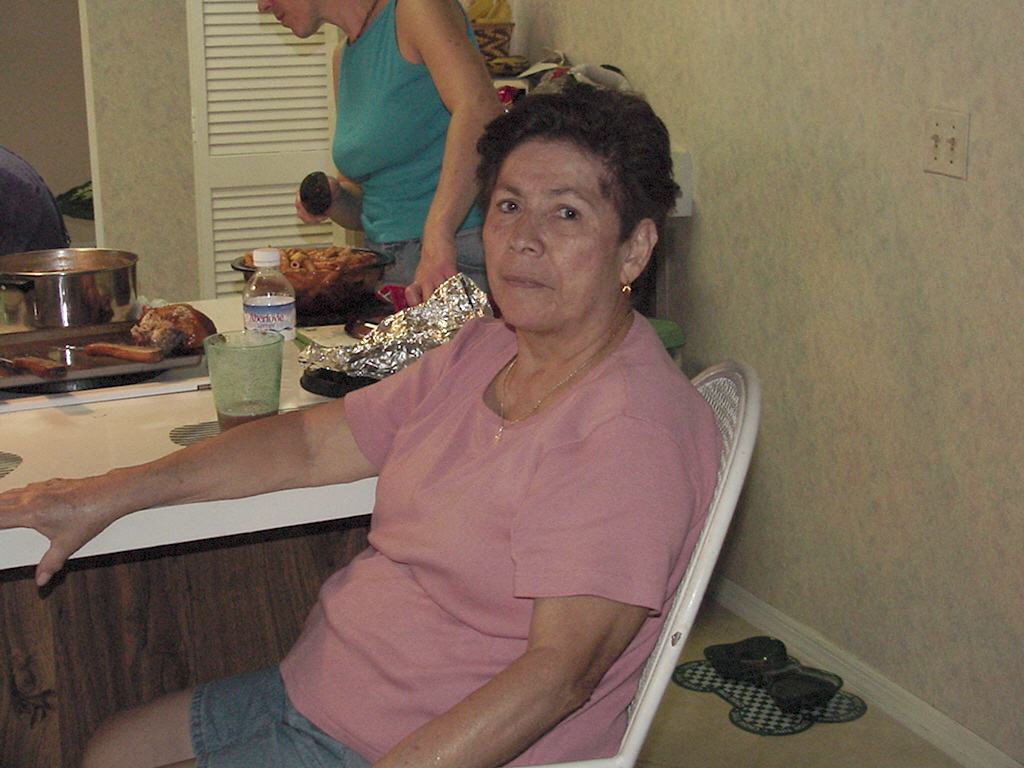 Lida Alminate, in an undated family photo, died March 30, 2019 after a car struck the side of her apartment in the Town of Tonawanda. (Photo courtesy of the family of Lida Alminate)

Lida Alminate, 94, was watching TV in her apartment. The force of the impact sent bricks flying through the interior of the building and caused the ceiling to cave in.

"Everything fell on top of her," Flynn said. "She was basically buried alive in debris."

Alminate was taken to Kenmore Mercy Hospital and then to Erie County Medical Center, where she died four days later.

A mother of seven, grandmother to nine and great-grandmother to two, Alminate was still healthy and active at age 94. She doted on her family and was famous for making empanadas from her native Ecuador, said her daughter, Dolores Incorvaia, 56.

"This woman was loved by all and was such a big part of our lives," Incorvaia said. "She left this world in a very horrific way, with no dignity. That was extremely hard for all of us. You don't want to lose a loved one like that."

She said the family is glad that Harris has been charged.

"The Alminate family is glad to see that the perpetrator of her death is being brought to justice," said Christopher M. Pannozzo, a lawyer representing Alminate's family.

Harris' defense attorney Frank LoTempio III said in court that Harris is a honorably discharged Marine who suffers from PTSD and narcolepsy and is being treated for depression, WBFO reported.

Harris has a legal prescription for medical marijuana and turned in his license a month before the crash, he said in court.

Flynn said he's sympathetic to the circumstances that contributed to the deadly crash. Charges could end up being lessened.

"I'm open to discussions on that," he said. "But right now he's charged with murder."

He was also indicted on a charge of second-degree vehicular manslaughter, a felony.

The second case involves the death of Adrienne Early, 47, a Buffalo woman who was standing at a bus stop at Genesee Street and Fillmore Avenue at about 6:30 p.m. on Oct. 11, 2018, when Carlos Velez, 30, of Greenport, N.Y., crashed into a second car, causing his vehicle to "project up onto the sidewalk," prosecutors say.

The vehicle hit Early and "she died at the scene," Flynn said.

Velez, who was extradited from Florida, has been charged with second-degree vehicular manslaughter and a traffic violation for running a traffic light.

He appeared before Wojtaszek handcuffed and in an orange jumpsuit. He said he had limited understanding of English and asked for an interpreter, which led to a delay in his case until Thursday. No formal plea was entered.

Legalization of recreational marijuana appears to have had a mixed impact on traffic safety in Colorado, where voters approved it in 2012.

In Colorado, drivers are considered under the influence of cannabis if a blood test shows their they have 5 nanograms of Delta-9 THC per milliliter in their system. Delta-9 is the active form of THC, which is the component of marijuana that makes a person "high," according to Colorado authorities.

Traffic fatalities involving drivers who were legally impaired because of marijuana dropped sharply, from 52 in 2016 to 35 in 2017, according to the Colorado Department of Transportation.

Insurance companies, however, reported an increase of overall crashes reported to them – as much as 6% – in four states including Colorado where the adult use of recreational pot is legal, according to a study by the Insurance Institute for Highway Safety.

Also, the Colorado State Patrol reported a 25% increase in the number of citations for driving under the influence of marijuana from 2014, when legal retail sales of recreational pot began in Colorado, to 2018.

Citations for driving while under the influence of just alcohol dropped by 8.5%, according to Colorado troopers.

There's no breath test for drugs. Here's how police detect driving while high