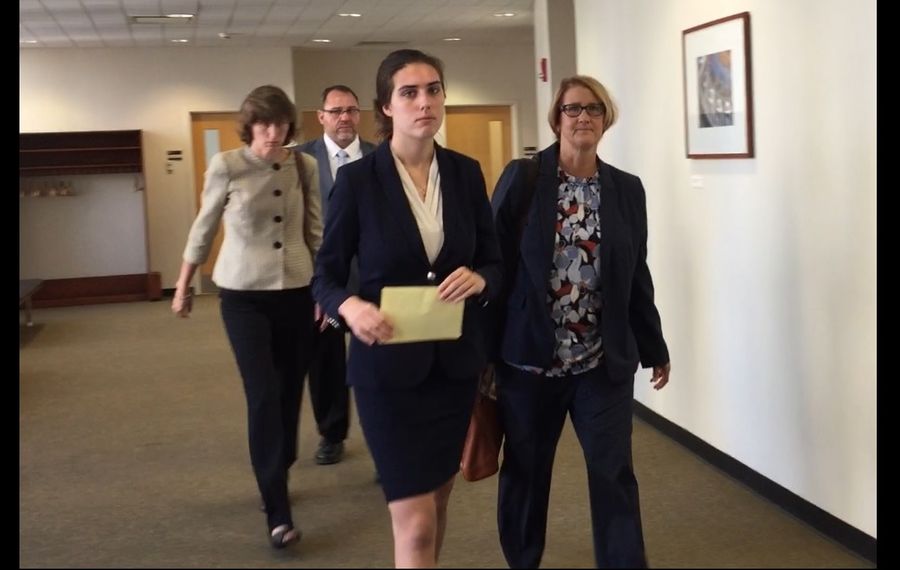 Hannah Christensen sat inside her parked car on the University at Buffalo’s North Campus, watching as police and emergency responders treated Renuka Ramanadhan.

It was the evening of Nov. 1, shortly after the car Christensen was driving struck Ramanadhan, a fellow UB student, in front of the Hadley Village Apartments. After seeing that the person she had hit was getting medical attention, Christensen drove away.

But when police caught up with her two weeks later, after receiving a tip about her possible involvement in the incident, she was remorseful and cooperated by giving a statement.

That apparently was enough for State Supreme Court Justice Christopher J. Burns, who on Wednesday granted Christensen a one-year conditional discharge and ordered her to complete 150 hours of community service.

Ramanadhan, an accounting major, spent several weeks recovering in the hospital after suffering a fractured skull, traumatic brain injury and a fractured pelvis from the hit-and-run, prosecutors said.

“I can’t imagine what her family was thinking, wondering if they were ever going to hear their girl talk again,” Christensen told the judge.

Christensen – who wanted to become a nurse, her attorney said – told Burns she never wanted to put that kind of pain on someone.

“I can’t believe that I did that,” she recounted Wednesday before receiving her sentence.

Before he handed down the sentence, Burns said he found that Christensen exhibited a “sufficient level of remorse.” Burns was going to consider probation and didn’t think jail time was appropriate, he said.

“Yeah, you should have stopped,” Burns told her. In a perfect world, she would have, he said. But people exhibit human reactions, including panic, which doesn’t excuse Christensen’s actions, he said, though it helps explain what happened.

The judge said Christensen did "the right thing" to "go in and interview immediately," apparently meaning once the police tracked her down. Burns said he found no indication Christensen was playing "try and catch me."

Burns called the case “terrible, for both you and the victim.”

Christensen wrote a letter to the victim, which she gave to UB police at the time she gave her statement and asked them to deliver it to Ramanadhan. In it, she expressed her “sorrow and guilt,” she told the judge Wednesday.

Cheryl Meyers Buth, Christensen’s attorney, told the judge she worked with Ramanadhan’s civil attorney to try to get Christensen and Ramanadhan to meet for an attempt at reconciliation, but Ramanadhan ultimately declined to meet.

Christensen, of Clifton Park, an Albany suburb, has “technically” been suspended from UB and likely will be expelled, Meyers Buth said.

Under the terms of granting the discharge, Christensen also was ordered to “lead a law-abiding life” and maintain enrollment in school or employment for a year.

Meyers Buth, who said the incident had nothing to do with drugs or alcohol, said her client would likely be enrolling in a school closer to home.

“This was just a terrible accident,” she said.

Assistant District Attorney Paul J. Glascott told the judge that Ramanadhan, who is from Singapore, did not submit a victim impact statement and “just wants to move on with her life."

"The judge obviously considered the totality of the circumstances, which were the same things I considered when I agreed to offer her a plea to a misdemeanor," District Attorney John J. Flynn said.

Shortly before 10 p.m. Nov. 1, Christensen was driving on Hadley Road on UB's North Campus when she struck Ramanadhan, who was walking on a marked crosswalk, according to the Erie County District Attorney’s Office. Another driver who witnessed the crash stopped to help the victim and called 911, prosecutors said.

In the days that followed, University at Buffalo police released a surveillance camera image of a car while asking for assistance from the public to track down the driver. Christensen was arrested Nov. 16 and charged with a felony count of leaving the scene of a serious injury accident without reporting it to authorities. She was identified to police as a suspect by a person who knew her and knew that she was involved in an accident, according to prosecutors.

She was indicted in March on the same charge and pleaded guilty in May to a misdemeanor count of leaving the scene of an incident without reporting.

“I shouldn’t have been a coward,” she said.