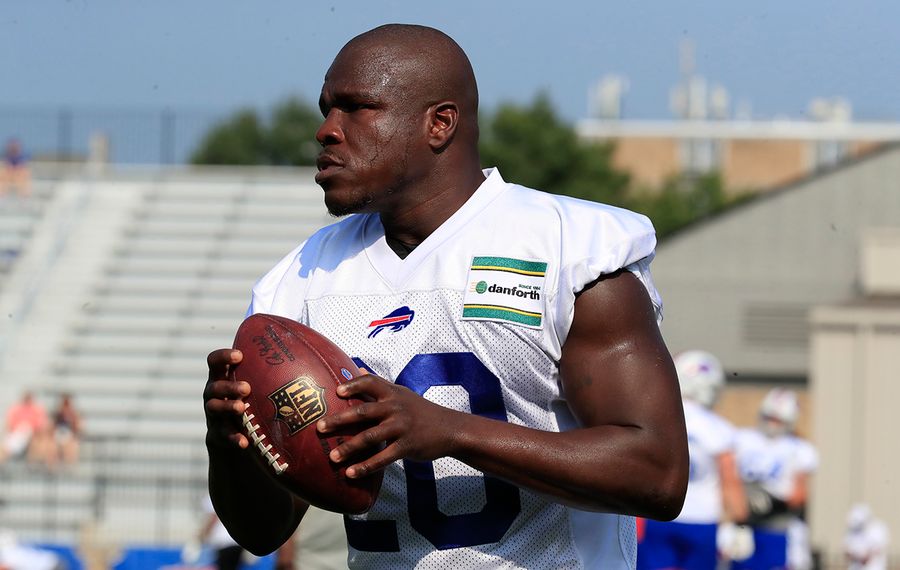 PITTSFORD – Frank Gore was looking for a place to escape the hot sun that had burned off the clouds during the second half of the Buffalo Bills' practice Wednesday at St. John Fisher College. We finally made our way into the Ralph C. Wilson Jr. Athletic Center, where the 36-year-old running back plopped down on an equipment bag against the wall.

He seemed understandably happy to be off his feet after a long morning of taking handoffs and darting around and through defenders.

But this wasn't a picture of some over-the-hill veteran clinging to whatever's left of a highly accomplished NFL career.

"I feel good, man," Gore said. After being placed on the non-football injury list for an undisclosed issue just before training camp opened July 25, he was cleared for the first practice and hasn't missed any of the six sessions.

"I'm blessed to be playing a game that I still love at the age that a lot of people say you can't play it," Gore said. "I'm doing something I love. I'm enjoying it."

He doesn't speak with any sort of bright smile or bubbly tone, because that's not him. His standard look and sound reflect stone-cold seriousness. Everything is said matter-of-factly. That's the case even when, in answer to the question of what drives him, Gore replies, "I'm still having fun."

You're willing to take him at his word, because why else would he bother putting himself through a 15th summer of camp drudgery? It has to go beyond the one-year, $2-million contract he signed last March. The guy has nothing left to prove. He ranks fourth on the NFL's all-time rushing list with 14,748 yards and his 12 seasons with 1,200 yards from scrimmage is a league record. Gore certainly would like to enhance his place in league history, but said that doesn't motivate him nearly as much as "competing with Shady" McCoy "to be the guy" in the Bills' backfield.

If he didn't take a snap with the Bills, the resume from 10 seasons with the 49ers, three with the Indianapolis Colts and one with the Miami Dolphins is worthy of induction into the Pro Football Hall of Fame.

"You're talking about a Hall of Famer, first ballot," General Manager Brandon Beane said. "If he's not first ballot, I'm walking to Canton myself to ask what the heck happened."

Gore is old enough to have a son playing high school football in South Florida. He's old enough that, when he first met Josh Allen, the Bills quarterback told him he had Gore's red, white and black jerseys from when Gore played for the San Francisco 49ers. Growing up in Northern California, the Niners were Allen's team and Gore was one of his favorite players.

Other than those encounters, however, he doesn't obsess about being much older than the majority of his teammates or the NFL's oldest player at his position.

In 2018 with the Dolphins, he ran for 722 yards and averaged 4.6 yards per carry in 14 games. A sprained foot kept him from playing the final two games, and he wound up not scoring a rushing touchdown for the first time in his career. Had Gore announced his retirement – something a pair of much younger Bills players have already done in less than two weeks – no one would have questioned it. His performance told him to keep playing, provided a team would give him the chance.

"Last year, I was having a good year," Gore said. "I got hurt the last two games, and I didn't want to stop like that. I still feel like I can play at a high level." 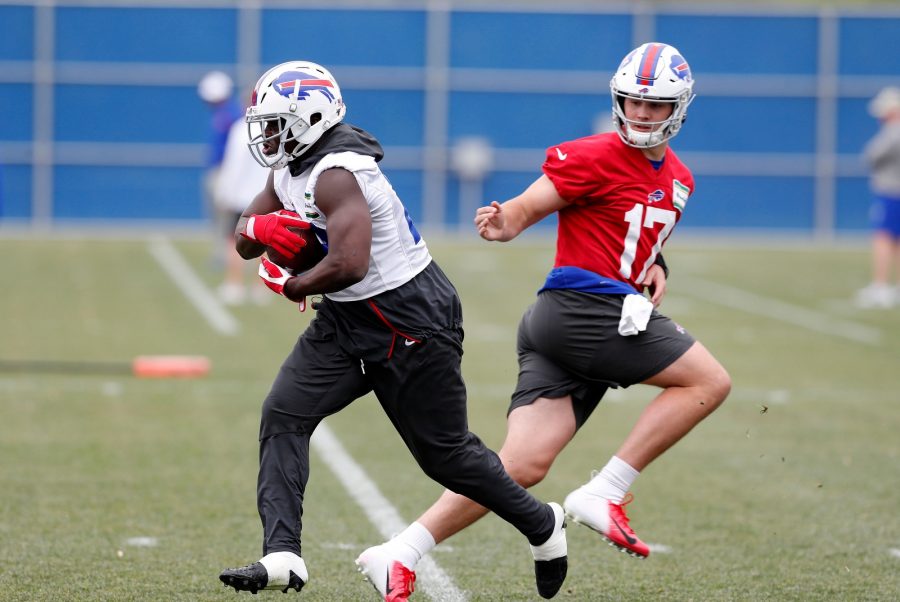 From afar, Beane had long admired Gore – the way he played and especially the fact, as he got older, he remained productive. The GM admitted to having become a "fan" of the running back, something he isn't prone to do because of the nature of a job that tends to make it difficult to place affection ahead of professionalism. Person after person in the league described Gore as "the greatest pro" and promised "you'll love that guy."

"But beyond the person, you still have to watch the film, you've still got to be able to play the game," Beane said. "And I said, 'When I watch this, I've got to take away his age and who it is. I've got to watch this player as if I don't see GORE on his back and know that he's mid-30s.' And I saw a guy who, until he injured his foot late in the year, was very productive for (the Dolphins), who was their lead back a lot of times, and was still contributing and playing.

"I don't want to put a number (on what he expects from Gore this season), but I think at the end of the day, if we needed him to be the lead back for games or whatever, he could do it. I have no doubt. He wants the ball. This guy's competitive. He wants it on first down, second down. We did a pass-pro drill (Tuesday), he's sticking his face right in there. He's going to be ready if we want him 10 times a game, 20 times a game, whatever. If we needed him to be a workhorse back for us, I think he could still do it."

Gore insists he isn't the least bit fazed about holding his own against a crowded backfield that, besides the 31-year-old McCoy and 21-year-old rookie Devin Singletary, the Bills' third-round draft pick, also includes 27-year-old Marcus Murphy and 25-year-old T.J. Yeldon.

"I don't worry about that," Gore said. "As long as I'm healthy and feeling good, I will compete with anybody. So I'm not tripping on that."

Does retirement ever cross his mind?

"Nah, no, I'm not thinking about it right now," he said. "I'm just going out there every day, trying to compete and try to win a job. If I feel like I can't go out there this year, I'll say, 'Forget it.' If I still think I can go and feel good and [I'm] still enjoying it, I'll go. But right now, I'll just take it one day at a time and see where it goes."

The offseason routine was the same as always. After finishing with OTAs and mandatory minicamp in Orchard Park, Gore put in additional weeks of intensive work in Fort Lauderdale, near where he grew up. Since entering the latter stages of his career, the former University of Miami star has made a point of working with significantly younger backs because it ramps up the challenge and helps him gauge whether he continues to have what it takes to be a viable force.

This year, the group, which meets at around 7 a.m., included Singletary, a former Florida Atlantic standout who is from the same area as Gore. The workouts emphasize agility, with drills that include moving in and out of cuts while operating in the small, 10- to 15-yard spaces to simulate what a running back does in a game. Gore constantly monitors how he measures up to the competition.

"If I'm working out with them and looking just as fast as them, I know I'll be fine during camp and also the season," he said. "If I'm training the way I've always been training, I know I have a chance."

That approach has mutual benefits. Singletary, who Gore calls a "smart kid" who pays close attention in meetings, was more than a stalking horse.

"We help each other," Gore said. "I'm showing him, I'm going into year 15 and I'm still training hard. That's what it takes to be successful in this league. I also help myself, to see if I can keep up with him.

"He understands run schemes, like the blocking scheme. He's very patient like me. He runs with his eyes, lets things set up. You don't really see that in a young player that fast."

Still, Gore hasn't had any problem keeping up with Singletary or any of the Bills' other running backs so far. He explodes through the hole as well as ever and glides into the open field. He twists and turns and fights for every extra inch. If he gets knocked down, he bounces right back up.

By all accounts, Gore still looks like what an all-time great running back should look like, even if he isn't the exact same guy he was when he ran for 1,695 yards in his second NFL season.

The training camp routine hasn't changed, either. Up early for a workout to "get my body moving." Then, it's in the training room treatment. Then, it's off to meetings. "And think about what I've got to do in practice," Gore said.

That's what a pro does and that's mainly how Gore leads: by example.

"I'm not a talker unless I really feel I have to say something," he said. "I'm going to show them by example by working my behind off. I've been like that since I was in high school. I just think, if people watch me and they know about all the success I had, they'll follow.

"Tough," he said. "Tough. When you look up tough in the dictionary, I think you'll see Frank Gore's picture right next to it. I mean, that guy ... he's tough. And if we're going to be anything, we're going to be a tough football team." He called Gore's example "a big part of building a good, solid football team, in particular in Buffalo, New York."

When Allen talks about Gore, he still sounds like that giddy 49er fan who collected his jerseys.

"For him to still be playing at the level that he is is unbelievable," the quarterback told SiriusXM NFL Radio. "But you meet the guy, you see how hard he works, you see him in practice and his type of effort that he gives every single play and you understand. It’s a Hall of Fame work ethic. It’s infectious, I think, to some of the guys in the building. I know it is for me. Just talking with him, he’s very studious, he’s very professional. It’s all about football when he’s on the field. It’s unbelievable to have him.”