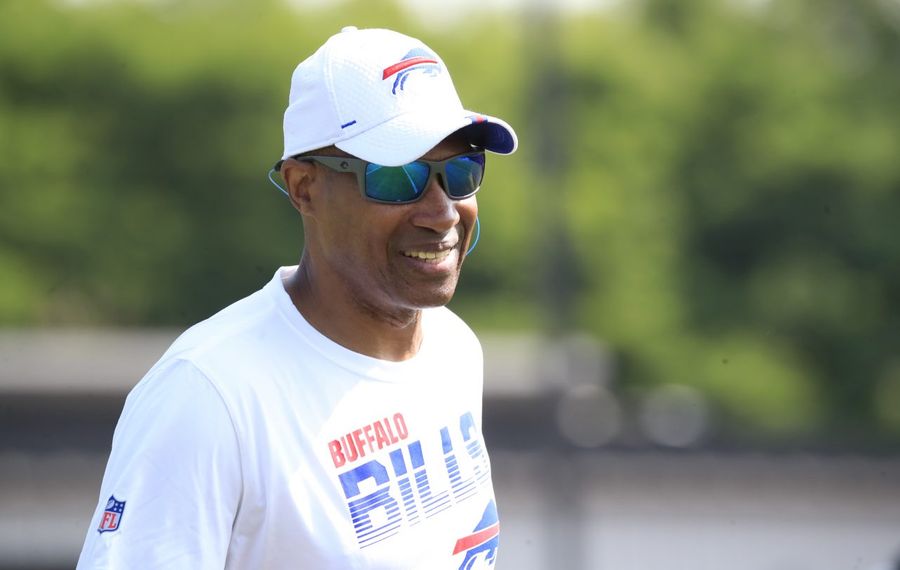 Players on the Bills’ defense weren’t necessarily thrilled with the oohs and aahs from the fans at St. John Fisher College as Josh Allen completed passes to John Brown and the offense was aggressive with long passes.

“I’m happy to see our offense take shots down the field,” Frazier said. “That makes us better.”

Frazier can also point to his Bills’ defense being among the top teams in the league in the last two years in allowing the fewest explosive plays. And he credits safeties Micah Hyde and Jordan Poyer.

According to analytics site Sharpfootballstats.com, the Bills allowed 36 explosive pass plays last season, which was fewest in the league, and allowed 43 in 2017, which was tied for third.

“We have an answer for someone trying to try to do what our offense was doing there,” he said Tuesday. “They take away the other team’s desire to go deep, particularly Micah Hyde. Micah discourages teams from taking shots downfield because of range and athleticism.”

Frazier said that has been evident since Hyde made a late interception in the Bills’ 23-17 victory in Week 4 in 2017. The Falcons were driving in the third quarter after the Bills had taken a 14-10 lead and Hyde picked off Matt Ryan at the Bills’ 12-yard line. The Bills then went on a 19-play drive that ended in a field goal and took 11:20 off the clock.

“The first two or three games teams were challenging us down the field,” Frazier said. “Micah had a  great interception. As the season went on, fewer and fewer teams were taking shots at our defense and it was really the same last year.”

Frazier said the defensive coaches do a great job preparing the secondary, but added, “Our trust is implicit they know the scheme as well as we do in some areas. … They’ve earned that trust because of some of the things they’ve done for us.”

He said if Poyer or Hyde approaches him with an adjustment, “Eight out of 10 times, I’m going to do it.”

Here is more from Frazier:

On Trent Murphy vs. his play a year ago coming off knee surgery: “It’s night and day when you see his movement in the drills. Just the fact that he’s able to practice every day, which he wasn’t able to do last year. … We’re going to get more of the guy that we saw in free agency when we signed him … so far so good.”

On Matt Milano’s recovery: Frazier said he’s “not quite there, but really close.” He said, “You could tell he was off just a little bit in OTAs,” and said Milano will “benefit a great deal from being in training camp and getting that confidence and not being afraid of the leg.”

On Kevin Johnson and what he brings to the battle at right cornerback: “Levi did a heck of a job and really solidified right corner for us after it was a revolving door for a bit of time. Kevin’s issue is not athleticism or the ability to play corner. It’s can he hold up from a physical standpoint when we get in a live situation. We’ll see how things go once we get into preseason games and that will determine where he ends up.”