Patrick Reilly didn't have a question, exactly, for Ellen Jovin when he saw her sitting behind her "Grammar Table" on Sunday in the Elmwood Village.

But he sure was glad to find a kindred spirit in the sidewalk grammarian from New York City.

"I think it is so long overdue," said Reilly, a retired East Aurora resident. "She is an oasis in the desert."

Jovin last September started setting up a folding table around her neighborhood on Manhattan's Upper West Side, fielding questions from anyone who wants to talk to her.

She's expanded her pop-up project into a Grammar Table documentary, book and national tour after getting media attention.

She started her 5 1/2-week jaunt across the northern United States in Buffalo, where people chatted with her about the pleasures of George Will's columns, subject-verb agreement and how many spaces belong after a period.

"It's not just about grammar, but it's about human connection," said Jovin, wearing a "Stop! Grammar Time" T-shirt.

The business skills trainer has always had an interest in grammar, describing eighth grade sentence diagramming as "one of my favorite academic experiences of all time."

Her husband, Brandt Johnson, records her interactions with the public for the documentary.

"I bring to this undertaking a sense of grammar humility," Jovin said. "Too many people think they know everything and they freely dispense bad advice in a condescending way."

She said she gets questions from children to seniors and the most common query, by far, is when it's OK to use an Oxford comma.

This, for the uninitiated, is the comma placed after the second-to-last item in a group of three or more in a sentence, something newspapers tend not to include unless it's needed for clarity.

"I don't really care if they use it," Jovin said, democratically.

She doesn't charge for her advice, but some customers do offer to tip her or give her food.

"A guy once tried to give me his leftover lunch," Jovin said. (She declined.)

She said she'd been to Buffalo previously and thought this would be a good place to start her tour.

Jovin and Johnson came in Saturday and figured setting up along the Garden Walk Buffalo route would offer steady foot traffic. They were steered to a spot in front of Caffe Aroma.

Spread out in front of Jovin were Strunk & White's "The Elements of Style," "The Chicago Manual of Style" and the Merriam-Webster Collegiate Dictionary, along with Hindi, French and Spanish language guides. A handwritten sign urged people to "Vent!," "Ask a question!" or confess to "semicolonphobia."

Don Ingalls, a Buffalo resident, asked Jovin to confirm the phrase "a handful of supporters" is singular, because he'd recently seen it written as plural.

"I'm a stickler about that," said Ingalls, recalling his studies, but Jovin told him it can depend on the context. 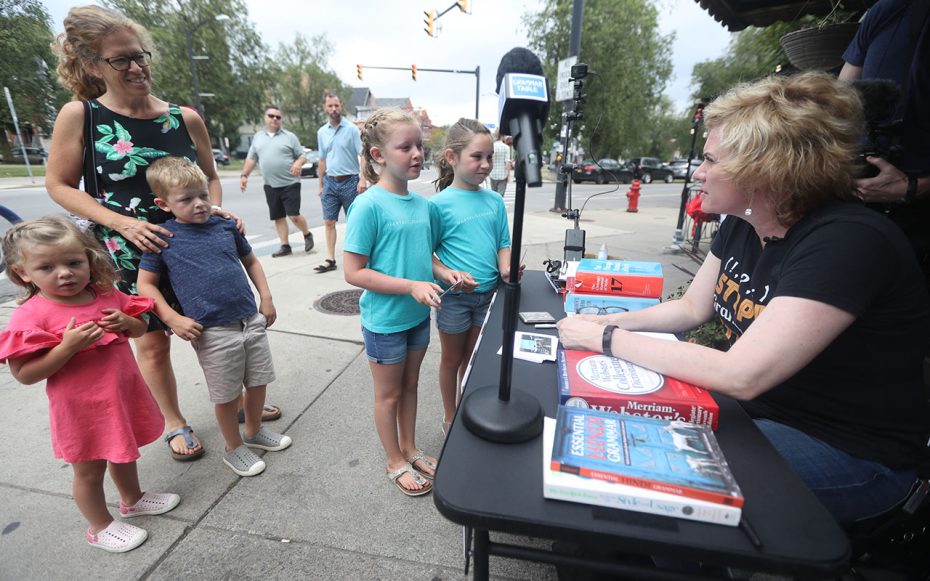 Orchard Park teacher Mary Claire Vivian encouraged her three children, and a daughter's friend, to chat with Jovin before asking her question.

"How many spaces do you put after a period when typing?" Vivian asked.

"I grew up doing two, which I'm guessing is your situation as well," Jovin said. "But I switched to one when I started freelancing, because that's what the editors want."

"So I should teach fifth graders one?" Vivian said.

Jovin plans to set up her table by 8 a.m. Monday outside M&T’s Gold Dome bank branch, along Main Street near the Fountain Plaza Metro station.