The 11-game regular season of the Buffalo & District Soccer League's premier division has wrapped up, and six teams sealed postseason berths in the process.

Given BSC Raiders' recent dominance and Lackawanna FCY's roaring start to the season, it's not shocking that the duo claimed the coveted first-round byes. The other four playoff qualifiers, however, face do-or-die quarterfinals on Sunday; expect both contests to be close but significantly different in style.

Here's a short preview of each:

Overview: When these two teams met in the regular season, the result was one of the wildest games the BDSL has ever witnessed. BUSS jumped out to a 5-0 lead before collapsing completely; the resilient Coyotes battled back for shocking 5-5 draw.

It's a perfect story line entering Sunday's rematch, then, and it's reasonable to expect another high-scoring affair. Health-wise, Clarence is in better condition than BUSS, which just dropped a dramatic 3-2 Tehel Cup semifinal match to Celtic United; the Coyotes last match was a 4-2 toppling of Lackawanna. But given BUSS' recent history and second-half form, don't count BUSS out of this one just yet. 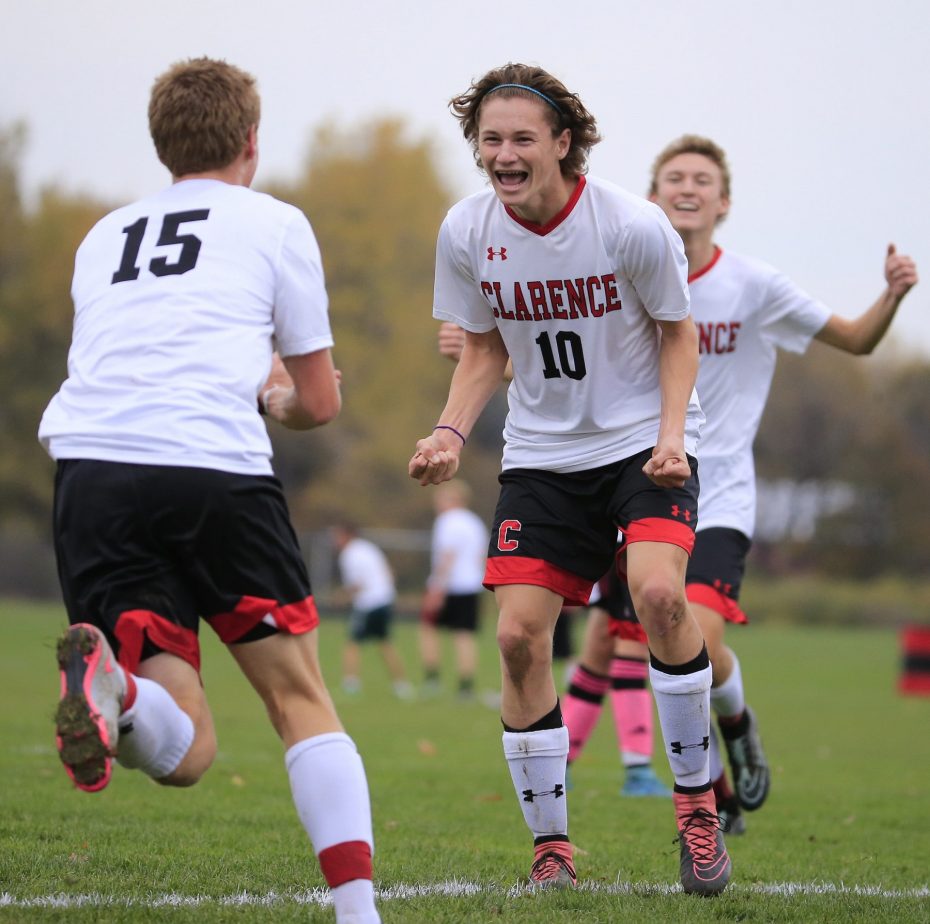 Clarence's status: The Coyotes are always better when Gary Boughton is available, as the former Erie Community College women's head coach registered three assists in that ferocious second-half comeback. He'll be in attendance on Sunday, pulling the strings from the midfield.

Managers Mike Antkowiak - who nobly filled in as goalkeeper for one game this year - and J.J. Hughes made perhaps the best deadline acquisition in premier, luring forward Alex Reid away from Celtic United.

Reid rewarded his new side with five goals, including all three in a 3-2 win over Queenston; the Daemen College alum complements quick, incisive attackers Chris Berardi and Sam Sutherland, who've combined for 10 goals and six assists this year.

Hughes is annually one of the league's best midfielders, while defenders A.C. LaFlore, Kenny May and Ryan Eaton are all physical enough to battle with BUSS forward Kyle Clifford.

The Coyotes are expected to have a side that's close to full health on Sunday.

BUSS' status: If Clarence made the biggest single splash during the transfer window, BUSS can be credited with the greatest improvement overall. Ted Roach, Mo Kretschmer and Mo Saif - who will miss Sunday's match after an ankle injury Thursday - helped an injury-riddled side recover; BUSS has been without defender Josh Hammer, midfielder Al Franjoine and Mo Musse for much, if not all, of the season.

Even without those six, BUSS is certainly capable of advancing. The two Hunters - Walsh and Sherman - each potted six goals during the regular season, even if those stats were inflated by the 10-0 massacre of nine-man Southtowns. 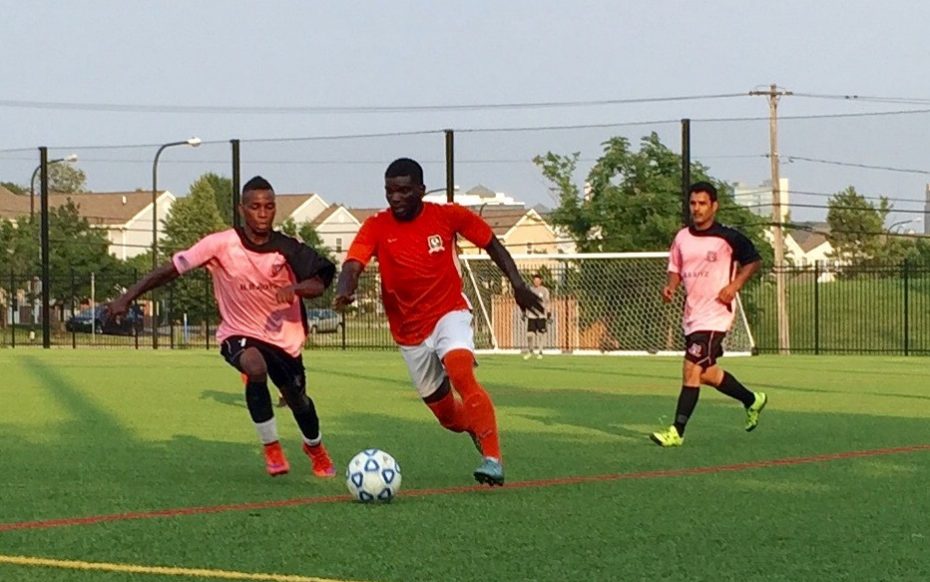 BUSS' Prince Saysay, in orange, will have a busy evening at outside back. (Ben Tsujimoto/News file photo)

Also, watch how Nate Nuwer plays his midfield role. He's not flashy in the least, but he keeps the ball, works relentlessly to create space for himself and teammates, and makes poised decisions. Kretschmer is similarly elegant.

What might happen: If you like goals and drama, this is the game to attend on Sunday. We're leaning toward a 3-2 Clarence win, but it's completely feasible that BUSS could win by the same score.

[Related: Look back at premier division round-up from season's first half]

Overview: The regular-season meeting between these two quarterfinal foes was a grind-it-out scoreless affair that featured far more tackles than scoring chances. Sharpshooters were without almost all of their starting defenders that day, with Cody Rouse dropping back from his midfield role to put in a man-of-the-match performance at center back.

Credit Inter for carving out a playoff spot in its first year after promotion from the championship division, a feat achieved more often than you might expect, but impressive nonetheless. They're physical, disciplined and often get angry with each other.

If anything, BSC Inter's style - defense-first with counter-attacking intent - is suited to trouble Sharpshooters, who keep the ball better than most premier teams but scored 12 fewer goals this season than last. The goalkeepers - James Quinn for Sharpshooters and Brian Arcara of Inter - are among the best at their position in the BDSL. 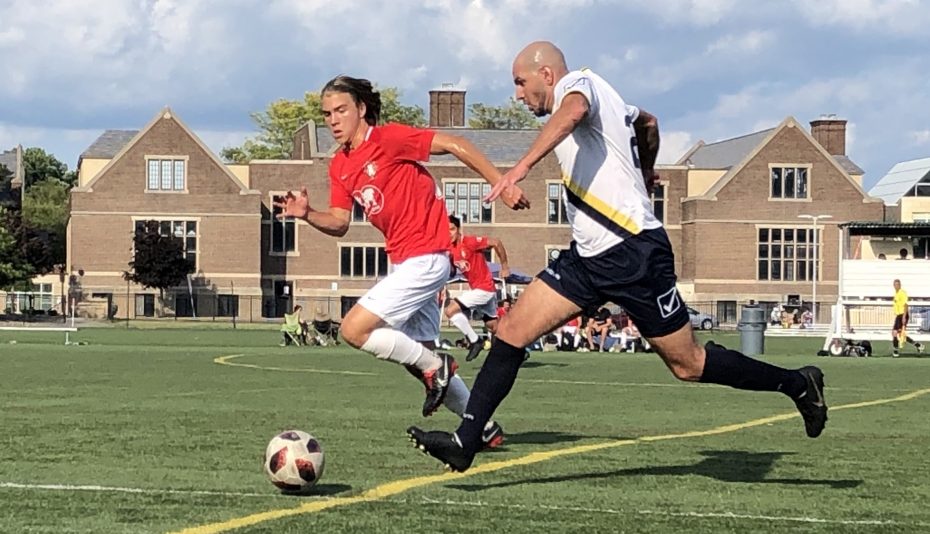 Sharpshooters' status: For Amherst, the most encouraging takeaway - and almost a cruel turn of events - from the 4-1 win over Wolves was the brace notched by striker Joe Vucic, who transferred away from the losing side to join the winners and, in turn, sealed their demotion.

The former East Aurora goalscorer had struggled to bury his chances with Wolves, so it's possible he's turned a corner since joining his new side. Vucic was in attendance during the scoreless draw, however, and he often was forced to drop deep to receive the ball and escape from the clutches of big Inter center backs Ross Karipidis and Rahim Melon.

Any one of Vucic, veteran Sharpshooter Justin Hofschneider, burly Zack Schmidt or speedy Ali Shawish, who went from scoring more than 20 goals for Lackawanna FCY to just one this summer, will need a big day Sunday.

Twitter account Premier Postgame predicted that Sharpshooters' youth would give the higher seed the edge, and it's possible, even with reigning WNY Player of the Year Ishaan Kashyap and Williamsville East teammate Ben Woolingham banged up for most of the summer.

Holding midfielder Derek Bartlo (incoming freshman at Daemen) has been an absolute animal for Trevor Lawler's team, while Riley Wagner (soon-to-be senior at Starpoint) has played with a maturity beyond his years at defense.

Defensively, it's possible that Drew Braun and Ricky Martinez - the first-choice center back pairing - will return from an extended hiatus. 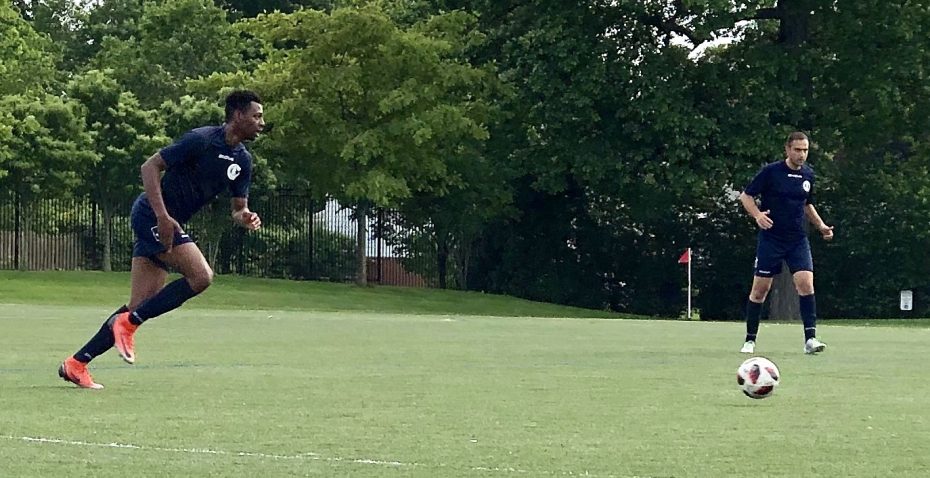 BSC Inter's status: Inter won't wow you with their possession, but their speed on the counter - thanks to Mo Hussein, Jenaro Aken, Abdi Sabtow, Drew Colosimo and Lorne Maxime - creates problems for opponents. They're simply a hard team to play against, because they're perfectly fine with an physical, rhythm-less style as long as it produces three points.

Cerebral Ross Karipidis shouts direction, criticism and occasionally encouragement from his center back position, where he's complemented exceptionally by uber-athletic Melon, who just wrapped up his final year of college eligibility with Medaille. Their steadiness allows outside back Otto Boussag to start counters and join the attack, overloading a side with numbers.

It will be imperative for Sharpshooters' holding midfielders - usually Bartlo and Rider graduate Andrew Crawford - to be wary of the attacking prowess of BSC Inter's midfield, as the unit is fast, direct and lethal if given space.

What might happen: Either 1-0 or 2-1 to Sharpshooters, but Inter will absolutely make them earn it.

[Go further back: Preseason predictions for BDSL premier in 2019]