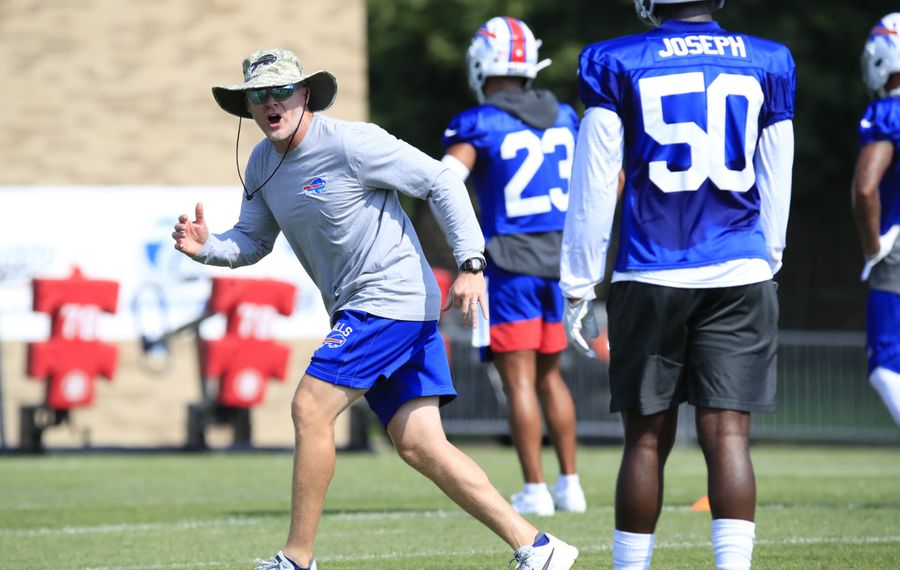 Opening Statement:  Good Morning, we will go ahead and get started. Before I begin, I just want to say of how appreciative I am of Kyle Peko coming to camp. We’re all human and we go through challenges, but the challenge that Kyle and his family are facing is certainly a significant one. I want to let his family know that we are with him all the way, and we’ll continue to pray for them and support them in any way we can. So with that we will open it up to your questions.

Q:  Just on that Sean, how tough is it, you know, for this organization? How do you go about being as supportive as you can in a situation like that?

A:  I mean just, you know, letting him know that we are there for him and supporting him in every way that we can. I think it’s very admirable that Kyle is here so letting him know that. I think it’s a good thing for him to be around his teammates. They’ve certainly reached out to him particularly last night when he let it be known what they were going through as a family. Kyle is a pretty private guy, you know, but just to know that he’s here, I think it’s again, admirable to watch him be in the shape that he’s in physically and that being good shape with all that his family has been going through. This is where the rubber meets the road. These guys are human and they are no different than anyone else out there. They go through things like we all do.

A: I’ll start with Ken. You know, I knew Ken from our time in Carolina and he’s a good teacher and a very competitive coach. He takes a lot of pride in his work and I’ve watched the dynamic unfold with Ken and Dabs [Brain Daboll] as well as in the quarterback room with Josh [Allen} and those guys. That can be a tricky dynamic, but he handles that extremely well and it’s a credit to the guys that are in that room, Brian and Ken himself and also our quarterbacks. And then with Bobbly, I haven’t been around Bobby until up until this year, but we have some colleagues in common. To watch and listen to how they describe Bobby is exactly what I’ve observed. You watch how he designs the running game, he’s a tireless worker, he’s up this morning in the weight room and he’s in there at 5 o’clock this morning pounding the weights in there, so I appreciate that as well.

Q: Speaking of Bobby again too, clearly the calls are going to be yours in the end but describe the difficulty that he’s facing with the situation. Trying to find perhaps four starters on that line and so much changing every day there.
A: Yeah, it’s a fluid situation to your point, Sal. The thing with Bobby is you don’t see this with every position coach – he keeps big picture perspective. From an offensive line standpoint, to have that and not have blinders on, that’s a little bit unique. You find that once in a while with line coachers offensively or defensively, to keep that perspective and be able to think clearly, I think is a strength of his.

Q: How do you feel; how do you see the competition at guard where you’ve got a lot of candidates who have credentials there and how would you describe that competition and how do you see the rotation going? Is it going to be rotating the first couple weeks?
A: Yeah, I mean it’s, we’ll take it one day at a time. There’s a number of candidates for those two positions, and as you know you look for who that third swing guard might be based on not only the 53 but also the 46. I think it will work itself out over the course of time. We are just in day two right now.

Q: What were your impressions of John Brown especially working in the red zone yesterday and just the chemistry that he developed with Josh so quickly?

A: That’s good to see. Just like you said, in day one, you know, John is a guy that I’ve gone against him with the different teams that I’ve been with, and he’s a guy that we had a lot of respect for. You look at even going against Baltimore last year, we knew who John was a little bit and targeted him last year in free agency, and obviously he chose a different path and now it’s ironic how things work out. We are just very appreciative of John coming to Buffalo and I think his best football is in front of him.

Q: Did it surprise you; you know he’s supposedly known as a speedster and he’s got that reputation but the fact that he can separate in such short small spaces, did that impress you? Is that something that you’ve seen from him?

A: I would say with all of our wide receivers they are kind of like smurfs. If you have ever watched the smurfs, they work in like a small village so they can separate into small spaces. And all of our receivers are like this tall.

Q: But did you see that in his game? He’s got that reputation of just being the downfield threat kind of thing.

A: Yeah, you are right. So he does have that reputation, he’s got speed but he also got some niftiness into his route craft. You know, small areas, short areas, that’s what kind of makes him a dual threat not in just the long game but in the intermediate short routes.

Q: Sean, you talked about this yesterday in terms of trying to balance. I know you just addressed that guard position but balance, continuity and chemistry given everyone the best case of short they can do in terms of finalize your offensive line. More specifically, how do you do that, how are you distributing reps and how much are you dialed into that part of the process?

A: I mean yeah, it’s early. We talk almost daily, sometimes twice a day to say “hey where are we going with the rep count,” making sure we’re giving every player an opportunity to show us what they got and then also looking at it big picture wise. What would our offensive line look like if we did this, moving pieces around. That’s all good this time of year. Again, with the goal of, like we talked yesterday, finding continuity and getting guys set.

Q: I believe we’ve only seen Cody Ford at right tackle whether it was OTA’s, minicamp or yesterday. Is there any thought that he can play guard or are you strictly focused on him right now being a tackle spot?

A: There is thought to his position flexibility. You know with young players, you have to watch how much you put on them early so they can get comfortable at one position and we’ll see how it goes from there.

Q: So you’ve got some guys in their third year, Dion [Dawkins], Zay [Jones] that need to expand on what they did in year two. How critical is that third year in a player’s development after two seasons in the league?

A: That’s a great question. It used to be give a player two years and show him who he is, but now with some of the time constraints that we have through the entire calendar year, you know, you want to make sure you give a player enough time in this case that third year is important. Sometimes if you watch the absent flows of careers, first year might be x, the next year it changes a little bit, either up or down and then that third year you kind of find the true player and that’s really what we are looking for for those players.

Q: Dion was mad and admitted himself that year two was not the year he was happy with. Where do you feel his head is at going into this year? He said his weight is down, it’s where he wants to be and he is kind of feeling super charged for this year. Where do you feel he’s at?

Q: How often do you see a guy entering his third year maybe taking on a little bit more of a leadership role? I know Mitch [Morse] kind of walks in and is naturally a leader playing that center spot but Dion doesn’t look to shy about stepping forward with that offensive line grouping.

Q: Sean, regarding Dion, some of the narrative last year was that he really missed having Richie [Incognito] next to him. Do you buy into that or was it just a case of “yeah just didn’t have a real good year?” Did you buy into that Richie theory at all?

A: There’s probably some of that baked in there and some of just, you know, where Dion was in terms of his readiness. You have some challenges, especially once tape is out there for a full rookie season, People study your strengths and your weaknesses. It’s no different than a pitcher in baseball. Sometimes you see young pitchers come in and have success, but then they get on tape and people start to study them, this is a professional level so people put the time in and tend to understand your strengths and weaknesses. He has to continue to evolve.

Q: You mentioned that you want your defense to be nastier, edgier. How do you get guys to play that way?

A: We have to practice that way. What we do in practice is what you do in the games and that just comes. We have a lot of work to do and every year is different. Every unit is different each year. Defensively in this case, we have to build into that. I don’t think you just come out and say right away “I’m going to flip the switch” and it’s going to be different so that has to be daily approach, a daily intensity, a daily attitude and  the same way it is with developing fundamentals and technique.

Q: What’s your term for a nastier defense, more aggressive?

A: You feel it. I want to be able to feel our defense a little bit more than I did last season.

A: We will take it one day at a time. We’ll see how today’s practice goes.

Q: Specifically to Zay, coming out with the outside of a really good off season, are your expectations different or higher for him coming into year three?

A: Like I said in the spring, I’d say it’s for him to be the best version of himself. You know to come in, he’s had a good off season, he had a set back with the hamstring but at the same time I think he rehabbed it well and I’m looking for him to get on track early in camo and developing into a rhythm.

Q: Sean have you used that smurf personality in front of the receiver?

A: I don’t know. We got a bunch of them, like a county of smurfs.