Brian DePalma was in the row in front of me. Rex Reed was sitting in the row behind me. Some claimed Woody Allen was somewhere in Toronto's grungy Backstage Theater during the 1992 Toronto Film Festival Press and Industry screening of Quentin Tarantino's "Reservoir Dogs."

I've never believed them, personally. Allen was supposed to attend that year's Toronto festival, but somehow I don't see Allen joining the film world's celebrants of the most arresting film-making talent to emerge in the past three decades. (The film was lauded earlier at a Sundance Film Festival. Toronto, though, is where it first blasted into the Zeitgeist.)

Siskel and Ebert later stuck their thumbs as far earthward as possible for the sake of TV. I was as dazzled as other innovation-hungry critics by "Reservoir Dogs."

I also remember confiding to a friend after the general, excited, post-screening hubbub, "We're all going to be sorry one day that we're reacting this way to what we just saw." The most arresting scene in "Reservoir Dogs" -- which announced the filmmaker's penchant for sadism beyond the Coen Brothers ultra-violence -- was Michael Madsen dancing around to Stealers Wheel's "Stuck in the Middle with You" while torturing a cop because, he said, "It's amusing to me. ... All you can do is pray for a quick death, which you ain't gonna get."

Which was correct. The terrified cop lost an ear in the process (off-camera), but Madsen's character was then dispatched decisively by Tim Roth rousing himself to empty his entire gun into Madsen's torso. Before the film's public opening, Tarantino has said he sometimes used to count the screening walkouts during that scene. They were frequent and many.

But 27 years is a long time. Tarantino went a long way after that. He immediately fulfilled all his promise with what I think is his masterpiece, "Pulp Fiction." Everything after that, though, seems to have been gaudy, gifted, ultra-violent decline.

Until this very moment.

The newly married (for the first time) Tarantino has just made the film I've been hoping he'd find his way to for a couple decades now, "Once Upon a Time in Hollywood," opening this weekend.

Not at all coincidentally, it's the first film he's made since "Dogs" without the oversight of former Buffalo rock promoter and now disgraced movie mogul Harvey Weinstein ("He's my pop," Tarantino once told me plaintively during one of the phone interviews I did with the writer/director).

The glory of Tarantino in 1992 is that the indy film wave he announced was different in kind from the film culture that had taken hold in the '60's and '70's. That, to great extent, was patrician and came from school. If it didn't emerge from books and pedagogy, it married them.

What's important to understand about Tarantino is that before he paraded his street-level film scholarship to the world, he was the son of parents who seemed to treat him like a prodigy the first time he showed any signs at all.

Tarantino has claimed he wanted to be an actor at the age of 2. And that he was sent to lessons as a little one. His mother and his stepfather, he's said, would at the tenderest of ages (5 or 6) take him to films other parents would, undoubtedly, find wildly inappropriate -- John Boorman's violent masterpiece "Point Blank" for instance, starring Lee Marvin, Angie Dickinson and John Vernon.

The California kid absorbed it all. Did he ever.

In "Once Upon a Time in Hollywood" he shamelessly seems to want to disgorge all of it in a fable of two friends struggling on the fringe of major employment in Hollywood, Calif. in 1969. One is a hard-drinking, phlegmy, chain-smoking actor (Leonardo DiCaprio) who tried and failed to parlay a '50's TV Western about a bounty hunter into movie stardom the way Steve McQueen did after "Wanted: Dead or Alive." The floundering actor's freshness date seems to be fading inexorably into the past. Fading with him is his stunt-double, all-around factotum, buddy, and genuine professional admirer, played by Brad Pitt.

That, of course, is all a film needs in 2019 to go through the roof -- the first-ever pairing of DiCaprio and Pitt, who's 11 years DiCaprio's senior. DiCaprio's is a portrait of pathos and fear and frustration in an actor who's better than everyone now thinks, including himself.

Pitt's is a portrait of those whom the Hollywood film community sometimes admires the way civilians admire Hollywood actors -- the stunt people who flout dangerous odds in their day-to-day work and sometimes seem to have some of the actual skills that actors pretend to have. (It has, by the way, always seemed odd that stunt work has never won annual Oscars. Then again, creating a big award that annually reminds audiences of all the things actors can't really begin to do would definitely be counter-productive to star reputations.) 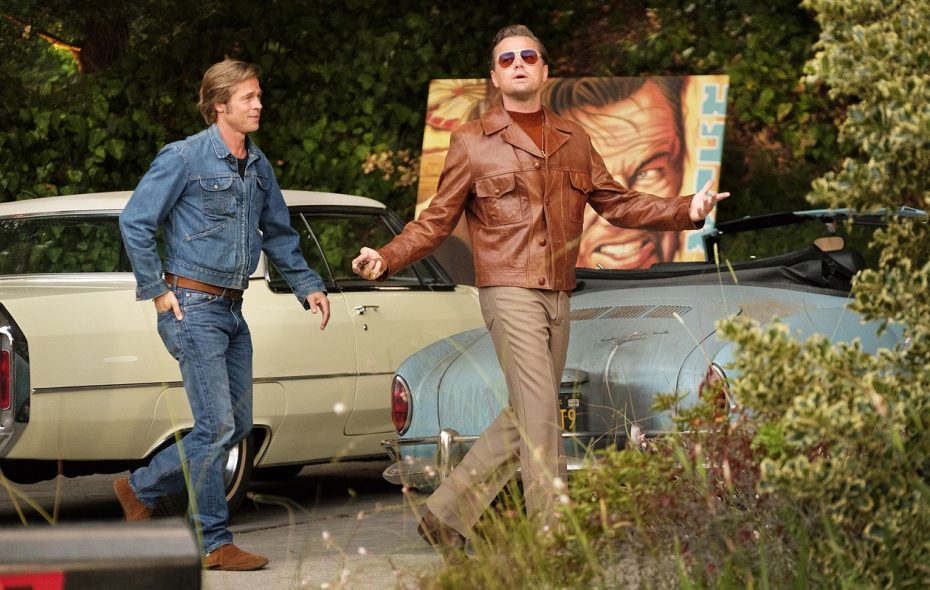 Brad Pitt, left, and Leonardo DiCaprio in “Once Upon a Time in Hollywood.” (Andrew Cooper, Sony Pictures Entertainment/Columbia Pictures)

To me, Tarantino's career started to go wrong -- way wrong -- when his "pop" Weinstein kept on letting him make alternative histories where real historical atrocities are corrected by fantasist Tarantino assigning fantasy machismo to places where it wasn't. In "Inglorious Basterds," that historical atrocity was The Holocaust. In "Django Unchained," it was slavery in America. If only Tarantino had been there to lead the historically oppressed non-existent multitudes.

"Once Upon a Time in America" is more modest. Our hero, slowly sliding down through what was then perceived the bottom of his profession (Italy's Cinecitta calls -- hilariously), lives next door to Roman Polanski and Sharon Tate on Cielo Drive in L.A. The Manson Family's date with destiny approaches.

Tarantino is on the case, though -- offering ultra-violence (in place of sadism) and a genuine love letter to Hollywood, to 1969, to American pop culture, to Los Angeles, and to the new life he seems to be having as a 56-year old marrying for the first time (to an Israeli singer who appears briefly as the new wife of DiCaprio in the film).

The film is a paradoxical triumph for Quentin Tarantino. Without the producer whom he called his "pop," Weinstein, Tarantino can relish in maturity the sweetness of being the film-and-culture drunk geek he's always been and to fantasize how sweet it might have been for others.

In the meantime, Pitt has one of the coolest movie roles he's yet played, DiCaprio gets to show off all manner of acting chops and Margot Robbie gets to enjoy pretending to be the Sharon Tate history denied us.

Al Pacino and Bruce Dern pass through to prove that Hollywood's most-senior mega-pros still approve of Tarantno and don't hold all those years of Weinstein's questionable tutelage against him.

I think that adult Tarantino -- the one with the chic new haircut -- found himself, and, frankly, by finally understanding and loving the hungry and impossibly avid film geek he once was.