Developer Douglas Jemal is making yet another adjustment to his plans for the Seneca One tower complex, proposing a new screen wall, a change in materials, new wall murals and the enclosure of two sets of steps on the south side of the site.

The owner of Washington, D.C.-based Douglas Development Corp. wants to continue the aesthetic improvements he has already begun on the southeastern corner of the plaza, by varying the look of the street-level facade along Exchange and Washington streets, according to a letter to the Buffalo Planning Board from attorney Adam S. Walters of Phillips Lytle.

That will create "the impression of a neighborhood or campus instead of reading as one monolithic building," wrote Walters, who represents Jemal.

He is seeking approval for his amended plans for Phase 4 of the $120 million redevelopment project at Seneca One. According to Walters' letter, those include:

• Constructing a new screen wall and trellis along the perimeter of the west plaza, at the corner of Pearl and Seneca streets, and the east plaza, at the corner of Washington and Seneca streets. The screen – comprised of a composite panel material, with window openings so that people on both sides can see through – would sit eight feet above the existing outside wall next to the sidewalk. That would "help define the plaza as an amenity for building users," while appearing like a first floor, Walters wrote.

• Switching out gray brick for a dark corrugated metal panel on the outside of the southeastern addition, creating more of a contrast with other parts of the building and plaza.

• Installing murals at the street level of Exchange and Washington.

• Enclosing the two existing outside staircases on both sides of Main Street at Upper Terrace and Exchange Street, on the south side of the tower complex. That would protect users from harsh weather while also allowing better access and security for the site.

• Constructing a new pedestrian bridge above the two new staircase enclosures to link both sides of the plaza where the new office additions are being constructed for M&T Bank Corp. The bridge, which would allow pedestrians to cross between the two additions without crossing Main Street below, would feature an industrial look that harkens to the nearby Canalside neighborhood, Walters wrote. 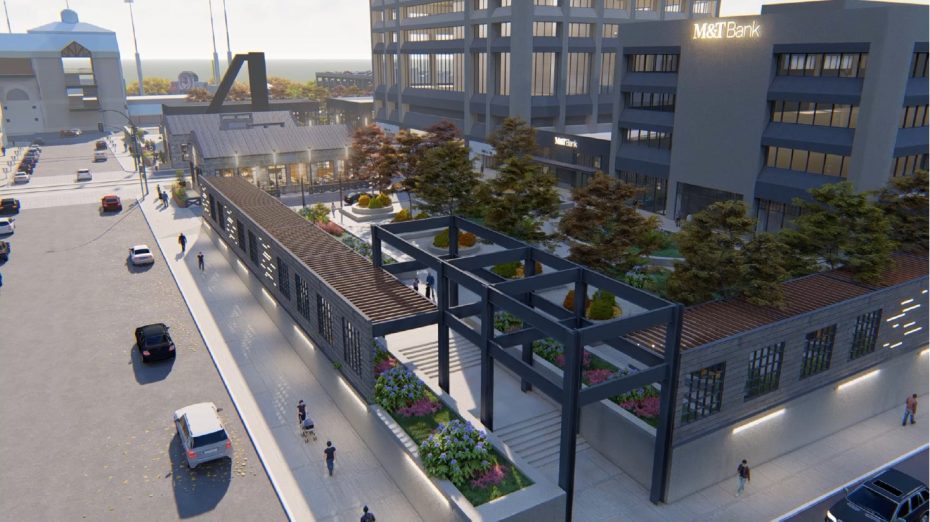 A rendering of Seneca One's plaza level along Seneca Street, with M&T Bank emblazoned on the building. (Image courtesy of the Buffalo Planning Board)

"The amended plans will continue to promote pedestrian activity and promote greater overall integration of the site," Walters wrote. "The new facade design uses materials that are more human in scale, and will display a new face at street level."

He also noted that the changes show "the extensive lengths to which the developer has gone to ensure" that the overall project fits with the neighborhood, the surrounding area and the city's comprehensive land-use plans.

"The site's retail and residential mix, in concert with the dense, mixed-use community in which it will be located, will bring new commerce, residents and visitors to the area in a way that encourages a socially active and public lifestyle," Walters wrote. "The amended plans will bring additional office space and associated retail and foot traffic to the area, bringing new life and vibrancy to the expansive plaza."

Work would begin upon approval, with a goal of completing this portion of the site by Oct. 30, to turn over to M&T for its planned new technology hub.

The revisions come as Jemal is also seeking city administrative approval to construct a pair of clubhouses on both sides of Main at Seneca, on the north side of the campus. He already received four variances for them from the Zoning Board of Appeals. Since those structures are small, they do not require full Planning Board approval.